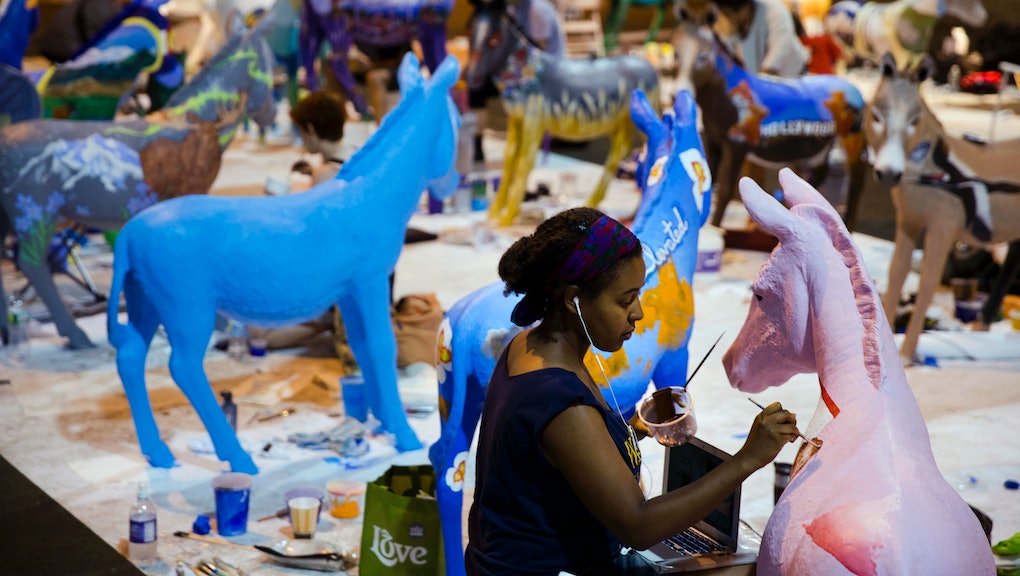 Delegates Are Going to Incredible Lengths to Get to the Conventions

Selena Coppa served in the U.S. Army for 10 years. Now honorably discharged from the military, she'll serve as a delegate at the Republican National Convention in Cleveland.

Neither endeavor has been easy.

"They told us all it would cost about $5,000 to $7,000" to make the trip from Washington state to Cleveland for the convention, Coppa, 33, said in an interview. "I'm making it work with about $3,000. It's still way too expensive to be called a democratic process."

Coppa — bent on getting to Cleveland because she feels presumptive nominee Donald Trump is "such a flaming tire fire of a candidate" — is one of legions of young delegates getting creative about paying the high costs of serving as a delegate.

The cost of doing business: Coppa, like many others in search of funds, set up a GoFundMe page to ask the public for help.

"I am ready to cut as many corners as I can — I have some experience roughing it, after all — but the Secret Service forces delegates to stay in the official convention hotel, (which you must pay for) and airfare to Cleveland is escalating rapidly," she wrote on her page.

But that wasn't all: When she and other delegates teamed up to fundraise through a silent auction, Coppa's husband handed over his Paintball gear — helmet, gun and all — for her to sell.

Coppa participated in a "dessert dash" to pull in more money to handle expenses like her $900 "delegate fee" and hotel. She also decided against trying to travel with her service dog to keep costs down.

Delegate at Tiffany's? Sanders delegate Erin Biggs, 35, an office manager for the state of Colorado's public defender, is thankful for the help of friends and strangers.

While she also turned to the internet for help, a friend donated a necklace for her silent auction to raise money for her trip, Biggs said.

"She had worked for Tiffany, and got that necklace on a sale when she was working for them and always wanted to do something special with it and never had," Biggs said in an interview. "And this presented itself as an opportunity. So she donated that, and I ended up getting $300 for [it]."

"The single biggest donation I got was from a gentleman in Illinois who I never met in person but has been doing a whole lot of fundraising for Bernie delegates all over the country. He donated $500," Biggs said. She continued:

I honestly was shocked, my mouth fell open and I started crying because it was so amazing and such a relief to know that someone cared that much and was willing to help and didn't really want anything in return other than for us to go there and do what we were elected to do.

Doing the math: Rachel Gonzalez, a Hillary Clinton delegate from Independence, Missouri, who doesn't even turn 18 until October, started adding up the costs a week after being elected — something she did without asking her parents for permission:

I didn't think I was going to win to become a delegate because I ran against so many amazing people that had so much more experience than I did. And I didn't tell my parents that I ran. I came home and said, "Hey, I was elected as a delegate." My dad said, "How much is this going to cost?" That was his first question.

The answer, by Gonzalez's estimate: $4,250 — a number she didn't rush to share with her folks.

"I said, 'Don't worry about it, I'm going to do it myself.' I didn't want to worry my parents for having to pay for something I didn't even tell them about," she said. "I contacted some groups and the [National Education Association] and my dad's union, and they helped a lot."

Local news coverage helped Gonzalez, head of the High School Democrats of Missouri, get attention for having become a delegate as such a young age, and Missouri State Rep. Rory Rowland and his wife chipped in $250 each, according to Gonzalez.

The most exciting part, according to Gonzalez? "Just being there with so many like-minded people," she said. "And I've heard that there are other young delegates. I just want to meet as many of them as I can."

Thanks, Gramps: A near-equally young delegate to the Republican convention, Jace Laquerre, is a rising high school senior from Colchester, Vermont, who will turn 18 in August. Laquerre bought plane tickets to Ohio thanks, in part, to help from his grandparents.

Laquerre, who credits former GOP presidential hopeful Rand Paul with sparking his involvement in the 2016 scramble, also asked for help via GoFundMe. He'd raised more than $1,400 at last count, although he noted that the platform does take a cut of the fundraising proceeds.

"Attending the Republican National Convention is very costly, especially if you're a high schooler from a rural town that has to pay for college soon. Hotels, travel, food and other expenses stack up quickly," he wrote of his $1,500 ask.

Laquerre, an activist with pro-life and gun-rights groups who was elected an at-large delegate, is pumped not only about being the youngest person ever to represent Vermont on the GOP convention floor, but about the trip itself.

"I've never been away from home for this long. I go with my family to like, Maine, for a week," said Laquerre. "I'm excited — maybe a bit nervous, but not too nervous."

Sweet dreams are made of... For Clinton delegate Melissa Sklarz, the trip to convention is blessedly short: It's just a short train ride from New York to Philadelphia.

But while Sklarz is a well-known political and LGBTQ rights activist and past board member of the Empire State Pride Agenda, she's an employee of a credit union — not an elected public official who can dip into campaign funds to underwrite the price of a hotel, meals and other necessities.

"I'm at the bottom of the food chain — but I'm clever. We're going to make it work," she said.

That's why she's hosting a karaoke fundraiser on Thursday at the landmark Stonewall Inn to help with what she estimates will be her $2,500 cost of serving at the DNC.

"We're going to have six containers" labeled with song choices, she said in an interview. "Wherever people put the most money, that's what I'll sing."

Her personal preference? "Sweet Dreams," by The Eurythmics.

It's a fitting choice, perhaps, for someone who's part of a group of delegates from 50 states and the U.S. territories who are traveling the country to voice their vote for the next president.