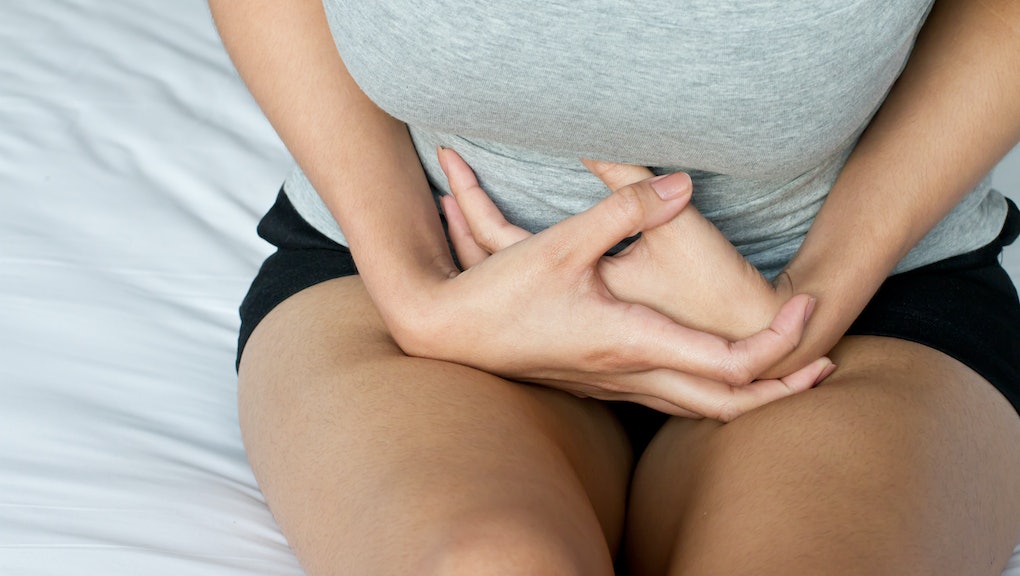 What Is Menstrual Extraction? Inside the Controversial Technique That Could Help Women

Five women stand around a bed in a bungalow outside Los Angeles, each wearing a pair of latex surgical gloves and holding various pieces of equipment. One is holding a speculum and a flashlight; another, lubricant and an apparatus known as the Del-Em, which consists of a cannula (a thin tube) and a syringe attached to a container with two tubes.

A woman named Lauren reclines on a bed, preparing to have her menstrual blood extracted.

Another member of the group, Robin, sits between Lauren's legs and inserts the cannula into her uterus. Then another woman, Maxine, begins to use the syringe as a pump. Lauren's menstrual blood flows through the plastic tube and into the collection jar. About 20 minutes later, her period is over.

The above scene is an example of menstrual extraction, or ME, as described by author Carol Downer, who recounts it in her book A Woman's Book of Choices. In the book, Downer and her co-author Rebecca Chalker write that ME was developed by a group of feminist activists in the early 1970s as a way for women to perform early abortions outside of the medical establishment, as well as a way for women to pass their entire menstrual periods all at once.

Today, menstrual extraction has largely faded into obscurity. However, in a country where women are starting to actively fight against period stigma, the discussions about the practice are becoming increasingly relevant.

A procedure by women, for women: Menstrual extraction works by creating a vacuum that suctions out the contents of the uterus through the cervix. Procedurally, ME is a form of vacuum aspiration, a common procedure for first-trimester abortions in countries where abortion is legal. Yet it can be used for both early abortions and as a way to pass an entire menstrual period all at once.

In 1971 — before Roe V. Wade, when abortion was illegal, difficult to access and often dangerous — a group of feminist activists headed by Downer decided to start performing vacuum aspirations on their own, which meant that women would no longer have to rely on underground doctors to access abortion. One member of the group, Lorraine Rothman, fashioned a device specifically for the procedure called the Del Em.

The activists dubbed the practice "menstrual extraction" and began spreading the word, encouraging women to form their own ME groups and demonstrating how to use the device. Brandi Kilburn is a doula who participates in a menstrual extraction group in Albuquerque. She said her group has been together for around four years and has a core group of 10 members, with an additional 10 members who are intermittently involved.

"We meet either by whim or by need," Kilburn said by phone. "Any member can call the group and ask to get together for this, and we'll meet as regularly as every couple weeks to every couple months."

While Chalker and Downer popularized ME as a way for women to take control over their own bodies, women outside the United States use ME as a form of contraception following a sexual encounter. This application is particularly relevant in the developing world, where it is referred to as menstrual regulation, or MR.

According to the National Abortion Federation, MR represents "a crucial strategy to circumvent anti-abortion laws." In Bangladesh, for example, the practice has been a staple of the national family planning program since 1979. According to a report from the Guttmacher Institute, around 468,000 MR procedures are performed in the country every year.

"Abortion is illegal in Bangladesh, but MR in this specific way is legal," Isaac Maddow-Zimet, who co-authored the study, said by phone.

Menstrual regulation is also widely practiced in Cuba, where it is offered to any woman whose period is two weeks late without a pregnancy test. While abortion is legal in Cuba, some women actually prefer to use MR as their contraceptive method, with 36 out of 1,000 women opting for the procedure, according to 2004 statistics.

The feminists that developed ME were guided by the principle of self-determination, but before women can assume greater agency over their reproductive health, they first have to understand how their bodies work and overcome apprehension regarding them.

A practice with extreme risks: The DIY aspect of ME has obviously made some medical professionals uncomfortable. While Downer and Kilburn both insist that when done properly, the practice is safe, doctors do not necessarily agree.

Dr. Brian Levine, a board certified OB/GYN who currently serves as the Practice Director for the fertility clinic CCRM New York, said that while the prospect of using an "aspiration kit" (like the Del-Em) at home with friends might seem appealing to some women, it is far too risky.

"This is a serious medical procedure with serious ramifications if not done correctly," Levine said. "Any time you are instrumenting anything into the uterus, you put yourself at risk of perforation, of bleeding and hemorrhage, of infection, of sterility. It is not something to experiment with. I think the women who say it's safe to do at home are overstating their capabilities."

When ME is also performed for pregnancy termination purposes, there's also a risk of the abortion being incomplete or unfinished, which can lead to various health complications such as hemorrhage or infection. "Health professionals experienced in performing abortions are more capable of determining whether the products of conception have been fully removed," Louise Tyrer wrote in a 1993 article on the procedure for the feminist publication On the Issues Magazine.

Banishing period stigma: Today, ME exists in a relative state of obscurity.  While at its peak, Downer estimates that there were around 100 active ME groups in the country, today there are just a handful of active ME groups left.

That's in part due to the aforementioned risks, as well as the fact that women now have greater access to abortion services: following Roe v. Wade, clinics opened up across the country, so ME was used less often as an abortifacient.

ME is also now rarely used for the purpose of menstrual extraction, in large part because the procedure is likely to make most women squeamish.  It is far easier, and less daunting, to buy tampons and pads then to assemble a group of like-minded women who feel safe vacuuming each other's uterine lining out, and are willing to invest the time learning to do so.

Yet the purpose of ME, Kilburn said, is to get women to confront a part of their biology that society wants them to suppress, due to the stigma surrounding menstruation. "We are spoon-fed shame at every level about being sexual, female or self-capable," she said. "When they hear about ME, women will hit you with the first impulse of revulsion. But once they let it sink in, they realize it's not as difficult or disturbing as they thought."

Kilburn believes learning about ME is to learn about female anatomy firsthand. Because undergoing a menstrual extraction requires the recipient to be comfortable opening her legs and having her menstrual blood sucked out in front of a group, the process puts women in intimate contact with what it means to have a period. She said that by giving women the opportunity to explore their bodies and participate in a community that honors femaleness, ME can be an empowering experience.

"I work in labor and delivery, and I see hosts of women who don't realize they can take their health into their own hands," Kilburn said. "They are dissociated from that knowledge, and this can limit their personal freedom. Menstrual Extraction is liberating because it provides a powerful feeling of capability."

Her group is trying to raise awareness about ME among the next generation of women and inspire new groups to form so the knowledge — for whatever purpose — does not get lost.

"I'm nearing the end of my childbearing years, and for me, it's vital that that Menstrual Extraction and self-awareness is distributed among the younger crowd," she said. "Access to yourself and an education about your own health, especially in this day and age when medical care can be on the line, is phenomenally useful and healthy. We have to make sure women know how to do this."