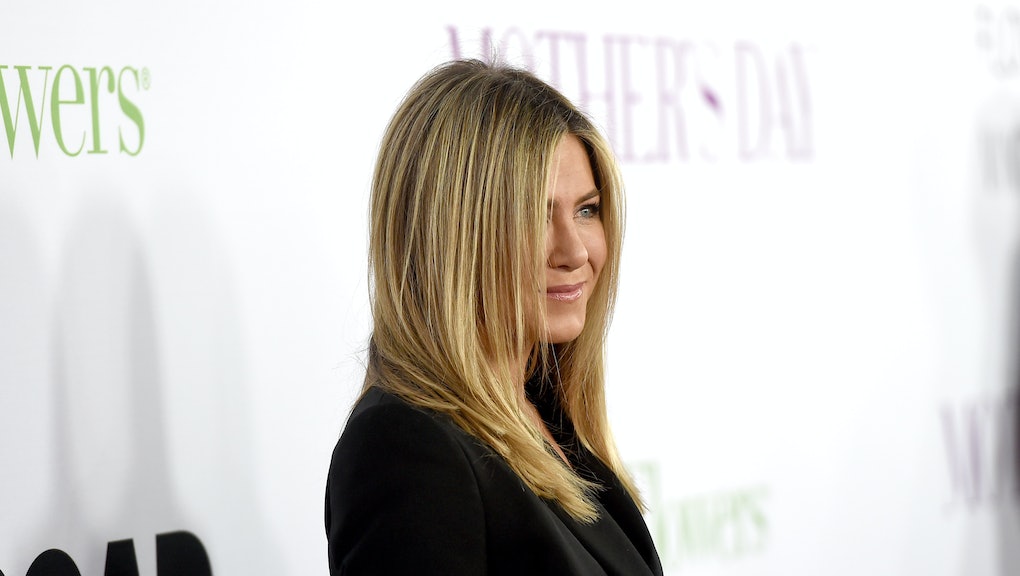 There are some things in this world that you know for sure. There will always be 24 hours in a day. Children will always get older. And Jennifer Aniston pregnancy rumors will always be on the cover of any given tabloid.

But guess what? Aniston is kinda pissed off about that last one!

The actress formerly known as Rachel Green wrote a savage open letter published Tuesday in the Huffington Post, going on the record with her belief that the tabloids' relentless speculation about her uterus is a reflection of larger (sexist) issues in our society.

"I used to tell myself that tabloids were like comic books, not to be taken seriously, just a soap opera for people to follow when they need a distraction," Aniston wrote. "But I really can't tell myself that anymore because the reality is the stalking and objectification I've experienced firsthand, going on decades now, reflects the warped way we calculate a woman's worth."

Aniston particularly took issue with rumors relating to whether she's having kids, which have resurfaced in the past year.

"Here's where I come out on this topic: We are complete with or without a mate, with or without a child," she wrote. "We get to decide for ourselves what is beautiful when it comes to our bodies. That decision is ours and ours alone. Let's make that decision for ourselves and for the young women in this world who look to us as examples. Let's make that decision consciously, outside of the tabloid noise. We don't need to be married or mothers to be complete. We get to determine our own 'happily ever after' for ourselves."

For the past 20-plus years, Aniston's name has endlessly popped up in daily headlines speculating as to whether she is a) in a relationship or b) pregnant. But she argues in her letter that although it has become a "sport" for people to analyze her personal life and root for her to have the standard "happy ending" of a husband and a family, people should rethink those expectations altogether.

"I have grown tired of being part of this narrative," she wrote. "Yes, I may become a mother some day... But I'm not in pursuit of motherhood because I feel incomplete in some way, as our celebrity news culture would lead us all to believe. I resent being made to feel 'less than' because my body is changing and/or I had a burger for lunch and was photographed from a weird angle and therefore deemed one of two things: 'pregnant' or 'fat.'"

Will this strongly worded letter finally be enough to convince the tabloids to STFU about whether Aniston is pregnant? Probably not, but she wrapped up on a vaguely hopeful note anyway.

"We get to decide how much we buy into what's being served up," Aniston wrote. "And maybe some day the tabloids will be forced to see the world through a different, more humanized lens because consumers have just stopped buying the bullshit."