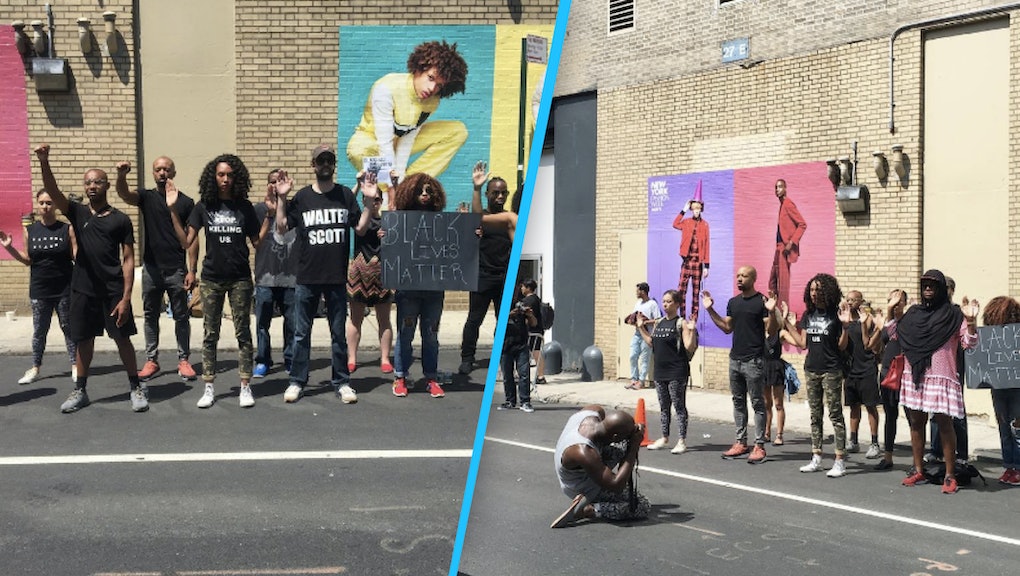 More than a dozen people gathered Tuesday morning near the main venue for New York Fashion Week: Men's in the Soho neighborhood of New York City. They came wearing black T-shirts, with some shirts reading "Sandra Bland" and "Walter Scott" and "Stop. Killing. Us." across the front.

They stood in silence, with their hands in the air, as well-dressed people passed them by. A few held signs with "Black Lives Matter" scrawled in large letters.

Although the fashion industry continues to embrace black culture, from sending models down the runway in cornrows to dressing models in Jamaican-inspired garb, it has stayed remarkably mum about Black Lives Matter and police brutality.

There have been outliers, like Pyer Moss designer Kerby Jean-Raymond, who made a bold statement on police brutality in September, and Zac Posen, who was photographed with a "Black Models Matter" tote bag. There has also been a small movement on social media, with models posting about their support of the Black Lives Matter movement. Overall, though, the mainstream fashion industry is silent. And these people gathered in protest of this silence.

The protest was organized by Hannah Stoudemire, who told Fashionista that the idea was first born when 12-year-old Tamir Rice was shot by a police officer in 2014, and the fashion world remained silent. Given the recent shootings of Alton Sterling and Philando Castile, she decided she couldn't wait any longer.

"I got the idea for it last year, or when Tamir Rice was killed in Cleveland, Ohio," she said. "I tabled it and wanted to wait until it was a bigger platform, so I was going to wait until this September, and I couldn't because Alton Sterling was killed. I know it sounds bad to say that it happened at the 'right moment,' but it did work out to where men's fashion week was coming up. And that whole week was very hard for us — I physically grieved them as if they were my own family."

Before NYFW: Men's, Stoudemire, who works in the fashion industry, announced she wouldn't be attending any shows this year, because no major fashion houses had acknowledged the recent shootings.

"I just want the fashion industry and people in general — the majority of the people represented here today — to acknowledge us," Stoudemire told Fashionista. "I say this time and time again: They acknowledge black culture, they use it to their advantage, use it on the runways."

To organize the protest, Stoudemire sent out text messages and emails to her circle of friends in the fashion industry. Then, to her surprise, word spread and by 10:30 a.m. Tuesday, Stoudemire marched with more than a dozen people down Washington Avenue in New York City. As press swarmed the group, one photographer left his duties and joined the protest.

The protest has made an impact. Less than 12 hours after Stoudemire's protest, the Council of Fashion Designers of America, which organizes NYFW: Men's, showed their support of Black Lives Matter.

The CFDA's Instagram account posted a picture of Stoudemire's protest with the caption: "An important reminder no matter how busy the week."

And according to Stoudemire, the CFDA reached out to her as well.

"He said that the CFDA is behind us, that he cares," Stoudemire told Mashable. "This means so much to me. I've been in love with fashion since I was four years old and to finally have the industry say that we matter too is validating. And I'm touched."

With Stoudemire already planning a protest at New York Fashion Week in September, the fashion industry is about to get quite the wakeup call.