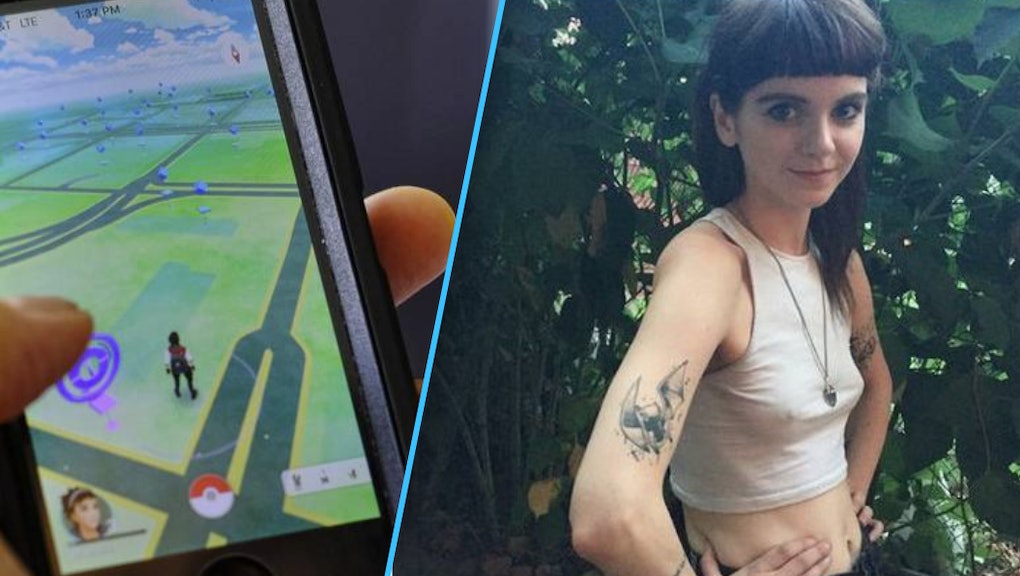 On Tuesday morning, 24-year-old Ivy St. Ive created a Craigslist post advertising her services as a real-life Pokémon trainer for the low price of $20 an hour. "My services are simple," she wrote in the since-deleted post. "I will walk around in 1-4 hr shifts signed in to your account capturing every single Pokémon I come into contact with."

Only 24 hours after creating the post, St. Ive hung up her visor and retired as a Pokémon trainer — without making a single dollar. It turns out that playing on someone else's account actually violates Niantic's terms of service, and St. Ive didn't want to risk getting banned from the game. Because, as she said in an interview Wednesday, "I just fucking love Pokémon."

St. Ive has been playing Pokémon since she was 7. "I remember going to the first Pokémon movie," she said. "I played the card games, I played the Gameboy games ... It's the only video game I play."

So when Pokémon Go debuted earlier this month, she was immediately hooked. But over the weekend, while she was out Pokémon-hunting with her boyfriend, St. Ive dropped her phone — smashing the screen. "I was freaking out, like I don't know how I'm going to pay for this," she said. If only she had been getting paid for all those hours of Pokémon Go she had already logged, she thought.

"I had devoted so much time to this," St. Ive said. "If I got $20 an hour for what I already put into this game, I could make thousands of dollars."

"I thought, maybe I'll post this as a joke," she said.

In the ad, St. Ive laid out her available services:

My services are simple: I will walk around in 1-4 hour shifts signed in to your account capturing every single Pokémon I come into contact with, activating every PokéStop I pass and walking nonstop to help hatch your eggs. I'll even send you hourly updates while you're at work/class/on a hot date informing you of any really exciting things I've come across for you. Pokémon training help, gym battles and strategy tips are also included, if requested.

"In a matter of three hours, the post had like 600 likes on Facebook," St. Ive said. Messages started pouring in — some were half-joking offers to hire her for her services, she said, but some were actually kind of scary.

It was actually a community of "gamer girls," St. Ive said, who reached out to help her — they told St. Ive that "there's some scary shit being said about you on 4Chan," and also that playing on someone else's account violates the Niantic terms of service, which could get her banned from the game altogether.

So around 6 a.m. on Wednesday morning, St. Ive decided to delete the post altogether and officially retire from her brief stint as a professional Pokémon Go trainer. "I thought, I'm going to do this, I'm going to put an end to this viral fame and kill this monster baby."

That's not to say monetizing her Pokémon Go smarts isn't still an option. "There's totally a market for it," she said. "It can become this sort of shadow economy where like, I can pay you to take my phone and play on my account."

But, as St. Ive said, "It's a really complicated thing ... I'm sure someone could figure this out, I really don't think i'm the right person to do it."

For now, she said, "I'm back to playing just for myself."