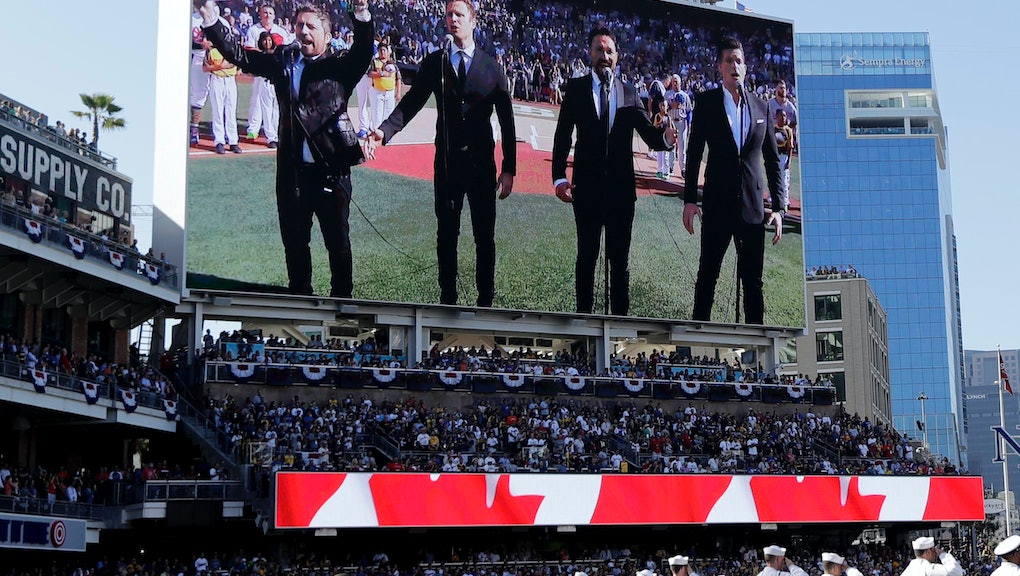 At the MLB All-Star Game on Tuesday night at San Diego's Petco Park, one of the singers performing "O Canada" went rogue and inserted an "all lives matter" reference into the lyrics.

According to a statement released by the Canadian quartet the Tenors, one member, Remigio Pereira, sneakily changed the words of the song during his solo in the middle of the group's performance.

Instead of singing "With glowing hearts we see thee rise/ The True North strong and free," Pereira can be heard singing, "We're all brothers and sisters/ All lives matter to the great." He also holds up a tiny, handwritten sign to drive home his point.

To quote Black Lives Matter co-founder Alicia Garza, "When we deploy 'all lives matter' as to correct an intervention specifically created to address anti-blackness, we lose the ways in which the state apparatus has built a program of genocide and repression mostly on the backs of black people."

Unsurprisingly, the social media backlash to the Tenors was swift:

The apology: In a statement released by the group later that night, the Tenors acknowledged the "extremely selfish" actions of Pereira, who acted as a "lone wolf." They said Pereira would not be performing with the group "until further notice."

Pereira responded by saying his message was about unity and positivity.

One big oversight: The Tenors apologized to "everybody who witnessed this shameful act, to our fellow Canadians, to Major League Baseball, to our friends, families, fans and to all those affected." The apology did not mention the black community, arguably the group most affected by the whole fiasco.