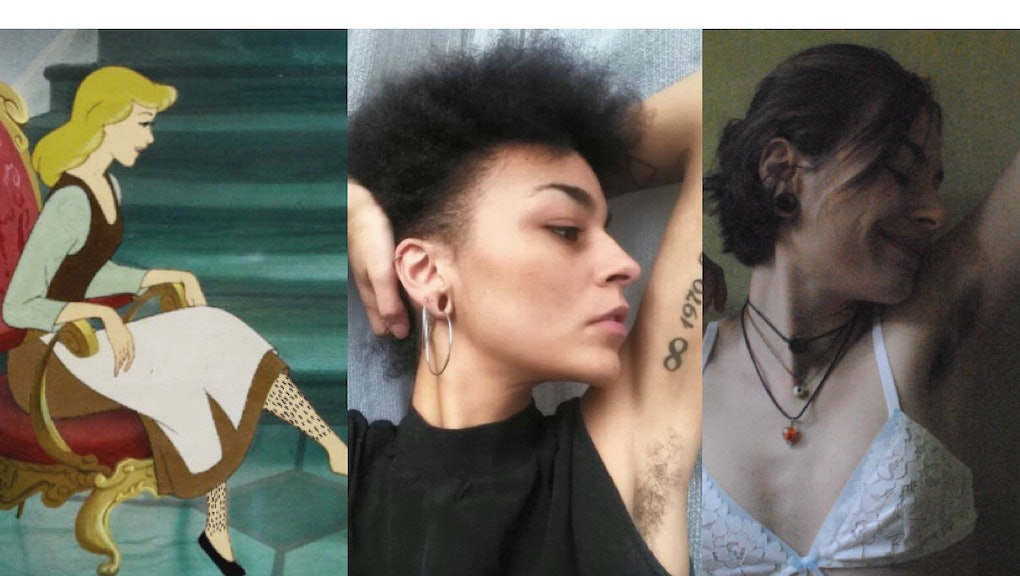 Women Are Tweeting #LesPrincessesOntDesPoils in Defense of Their Body Hair

Leave it to the French to remind the world that beautiful women can rock armpit scruff and hairy legs.

Earlier this week, a French teen Adele Labo's invitation for women and girls to send her pictures of their natural body hair on Twitter went viral. After a few days, her hashtag, #LesPrincessesOntDesPoils ("princesses have hair") has spread across multiple platforms and garnered more than 25,000 tweets, according to Dazed magazine.

The 16-year-old artist started her Les Princesses Ont Des Poils Tumblr account last year, with a few hairy self-portraits and pictures of her friends' body hair. Labo told Mic in a Twitter direct message she shared the hashtag as "a way for people to embrace their body as it is."

Society at large has convinced many women that their natural body hair is "gross" and even unhygienic. Yet scientifically speaking, that's completely untrue: Hair helps regulate body temperature while protecting sensitive areas.

One survey cited in professor Rebecca Herzig's book on the history of hair removal estimated that American women will spend an average of $10,000 throughout their lifetime on body hair removal. Women who wax their unwanted hair spend a staggering average of $23,000.

Labo's message of self-love confronts the body hair taboo head-on by subverting an iconic symbol of femininity: the beautiful princess.

"A lot of women and especially young girls do not accept their own natural bodies because of those [beauty] standards," Labo said Twitter direct message. "I think it is really important for society to celebrate women's natural bodies."