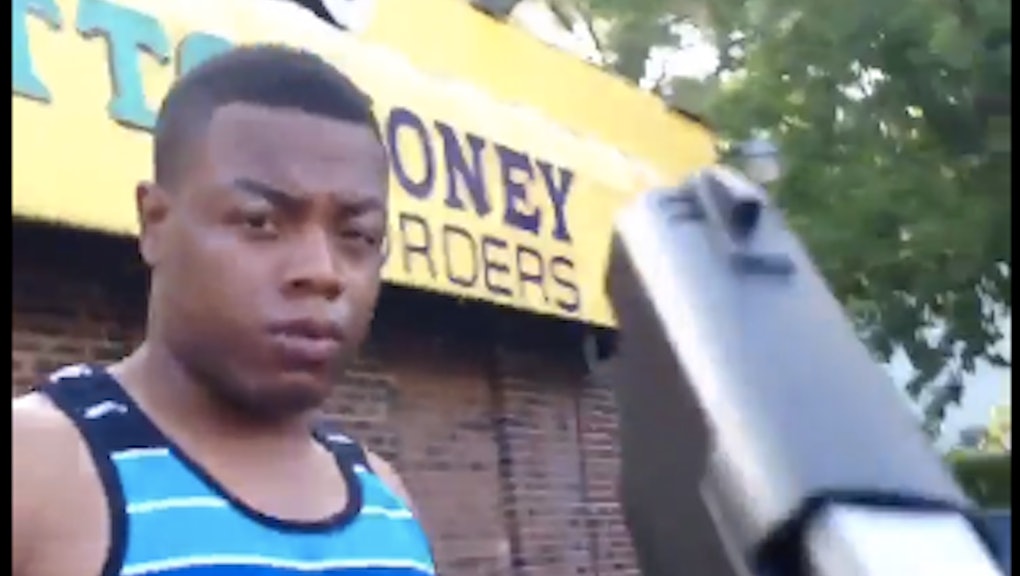 A video uploaded Tuesday evening to Twitter appears to show a man brandishing a weapon and threatening another man outside of a liquor store in Detroit. The caption uploaded alongside the video states "I hate gay niggas."

While it is unclear if the man being threatened in the video identifies as a member of LGBTQ communities, the man inside of the car hurls slurs at the man leaving the liquor store before pointing his gun at him.

"He gay as hell," the man in the video says, sitting inside of the vehicle. "Dick-in-the-booty-ass niggas."

UPDATE: Before Wednesday afternoon, the Twitter user Binswanson's account was public, but he has since protected his tweets.

No one was injured during the exchange. According to BLAC Detroit, the incident occurred at the Brightmoor Liquor Store, which sits on the corner of Lyndon Street and West Outer Drive.

The individual that uploaded the disgraceful video showed no remorse after the video was met with much criticism from those denouncing his actions online.

"I don't give a fuck about none of that shit y'all saying," he wrote on Twitter. "I hate gay niggas. Save that shit."

According to a 2013 study from the U.S. Department of Justice, members of the LGBTQ community are disproportionately the targets of hate crimes. On top of that, hate crimes are largely ignored by a large number of law enforcement agencies in the United States.

According to an investigation by the Associated Press, over 2,700 law enforcement agencies, such as city police and county sheriff departments, have failed to submit a single hate crime report within the last six years.

Members of the LGBTQ community face discrimination on a daily basis, which more often than not can lead to violence. Even for something as simple as going to the bathroom, the threat of violence is ever-present for LGBTQ people.