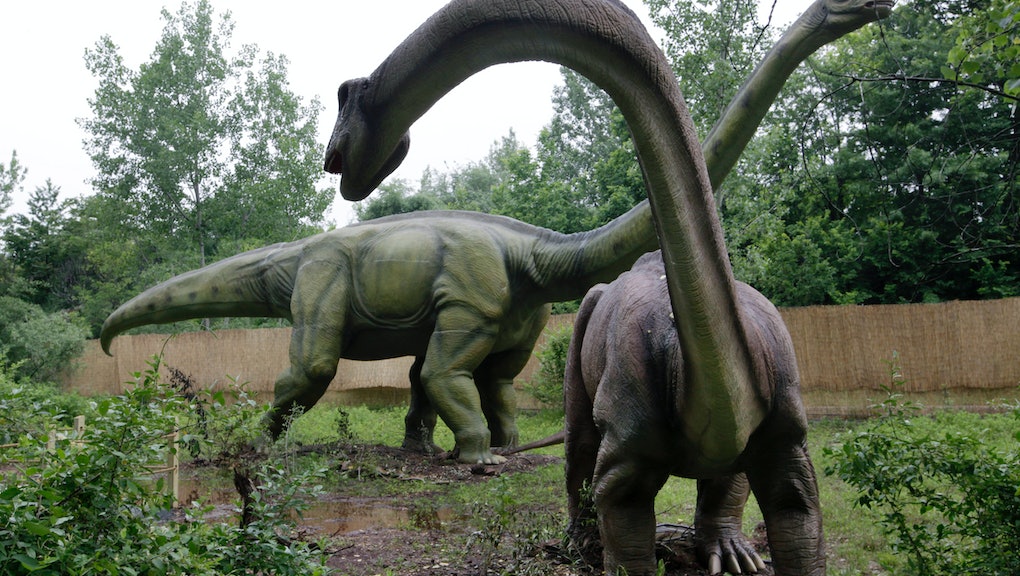 A T. Rex should have a fearsome roar, right? Wrong.

According to a new study out of the University of Texas, Jurassic Park may have filled our heads with lies. Because dinosaurs are the foreparents of birds, it would make sense that they made the same sorts of noises as their avian descendants, CNN reported Wednesday.

"To make any kind of sense of what non-avian dinosaurs sounded like, we need to understand how living birds vocalize," Julia Clarke, the study's co-author, said in a statement. "This makes for a very different Jurassic world. Not only were dinosaurs feathered, but they may have had bulging necks and made booming, closed-mouth sounds."

Oh, yeah. They were probably also covered in feathers.

Although they lack fossils for evidence, researchers believed that, like birds, dinos communicated through closed-mouthed vocalization: Keeping its trap shut, the animal would have pushed air into an esophageal pouch, rather than out through the mouth or nose. Of the 208 bird types examined, 52 communicated this way.

Crocodiles, which are also descended from dinosaurs, also used close-mouthed vocalization, allowing the scientists to draw some conclusions: A creature needs to have the lung power to inflate the throat pouch in the first place, so it will have to be at least as big as a dove. Cooing also appeared to be linked to environment and maybe even mating.

"A cool thing about this work is the demonstration that closed-mouth behavior evolved many times," Tobias Riede, the study's lead author, said. "That suggests it can emerge fairly easily and be incorporated into mating displays."

The effect of close-mouthed vocalization in a dinosaur probably would've been similar to a pigeon's coo, only amplified many times. This video was offered in the statement as an auditory aid.

The core-shattering study will be published in the journal Evolution.