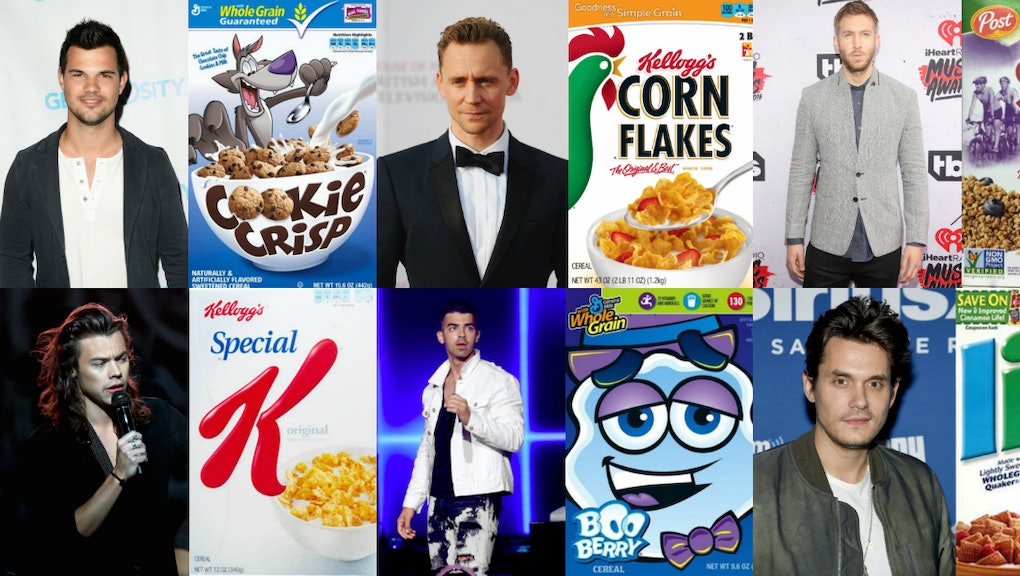 A Complete Guide to Taylor Swift's Boyfriends, Arranged By What Kind of Cereal They'd Be

Both of the above facts beg the inevitable question: What if all of Taylor Swift's ex-boyfriends were cereal? Which flavors would they be?

It is a question worth exploring!

Here's a complete list of Taylor Swift's boyfriends, arranged by what kind of cereal they'd be.

Why he is Boo Berry: Jonas reportedly broke up with Swift via a 27-second phone call, which is barely any better than a full-on ghosting. "Boo! I'm leaving you," is something he may have even said on the call.

Why he is Cookie Crisp: Lautner is most well-known for being a wolf. The current Cookie Crisp mascot is a wolf named Chip. This is almost certainly not a coincidence.

Why he is Apple Jacks: Gyllenhaal and Swift once embarked on a highly publicized apple-picking journey at an upstate New York farm together. Also: Gyllenhaal played the role of Jack — as in "Apple Jack" — Twist in the 2005 gay cowboy film Brokeback Mountain.

Why he is Trix: It is common knowledge that Trix are for kids. At a barely legal 18 years old, Conor Kennedy was basically a kid himself when he and Taylor, who was 22 at the time, went out.

Why he is Special K: On November 7, 2010, Harry Styles tweeted "Special K :D" without any further context. This tweet could be open to a number of interpretations, one of which is that he was self-identifying as the cereal Special K.

Why he is Grape Nuts: Calvin Harris has been acting totally nuts ever since he and Taylor broke up last month! Have you seen his recent tweets?

When he dated Taylor Swift: 2016-Present

Why he is Corn Flakes: Taylor Swift and Tom Hiddleston's relationship has been one romantic comedy trope after another. He recently even wore a shirt that said "I Heart T.S." This is extremely corny behavior!