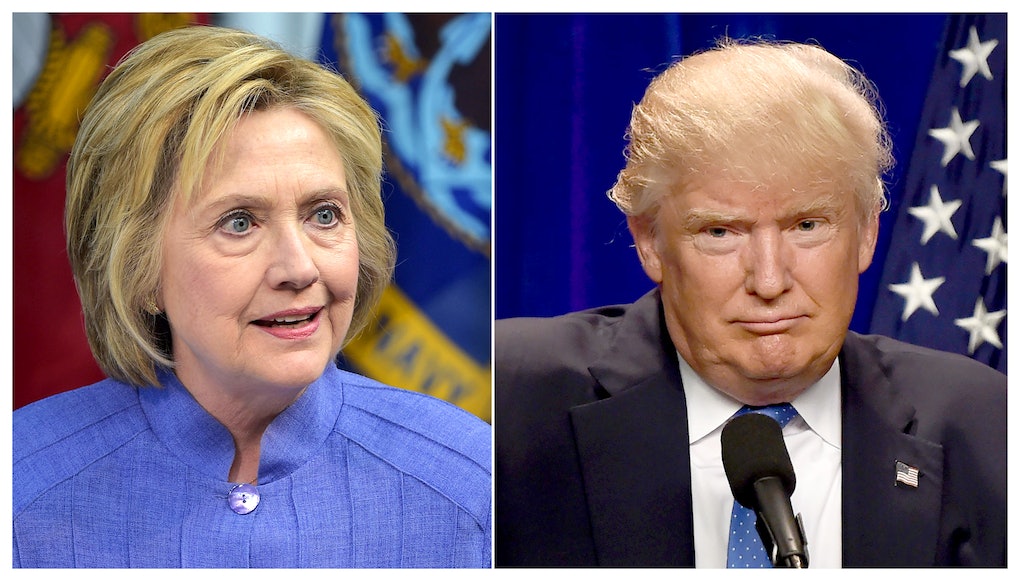 Badly damaged by the FBI's scathing criticism of her email practices as secretary of state and facing mounting public doubts about her honesty and trustworthiness, presumptive Democratic presidential nominee Hillary Clinton has seen her lead over Republican counterpart Donald Trump plunge, the latest batch of national and swing-state polls finds.

With Trump set to accept his party's nomination at the Republican National Convention in Cleveland next week, and Clinton slated to become the first woman ever nominated by a major party one week later in Philadelphia, the general election is shaping up to be a fiercely contested, polarized affair — not the Clinton blowout Democrats hoped for.

Here's a look at where the race stands.

A New York Times-CBS News poll released Thursday morning underscores how challenging the past few weeks have proven for Clinton. While Clinton led Trump 43% to 37% among voters nationwide one month ago, the two candidates are now deadlocked at 40% each — a tightening of the race also reflected in new polls from McClatchy/Marist and the Economist/YouGov. Those polls showed Clinton leading by three and two percentage points, respectively.

Overall, the RealClearPolitics polling average finds Clinton with a 44% to 41% edge over Trump, down from 46% to 39% in late June.

What's behind the tightening? A little more than one week after FBI Director James Comey blasted Clinton's "extremely careless" handling of classified material as secretary of state, the Times-CBS poll finds that a staggering 67% of voters say Clinton isn't honest and trustworthy, although 62% say the same of Trump.

On the issues, Clinton's clearest advantage is on race relations, with 60% of voters saying she'd better handle them, versus just 29% who said Trump would do better. Meanwhile, the real estate magnate has a 52% to 41% advantage over Clinton on handling jobs and the economy, while voters are about evenly split on who would better handle trade, illegal immigration and terrorism.

Of course, elections aren't ultimately decided at a national level: It's all about getting to 270 votes in the electoral college, and new polling shows a fiercely competitive race in the states likely to tip the balance.

A set of Quinnipiac University polls released Wednesday brought welcome news for those aboard the Trump Train, with Trump edging Clinton 42% to 39% in Florida and 43% to 41% in Pennsylvania, while the pair tied at 41% each in Ohio. Democratic-leaning critics charged that Quinnipiac's polls routinely under-sample minority voters, but elections forecaster Nate Silver gives their polls an A- grade.

Meanwhile, a Wall Street Journal-NBC News-Marist poll released Wednesday showed a brighter picture for Clinton in Pennsylvania, where she led 45% to 36%, but found a tight race in Ohio, where Clinton and Trump each took 39%, and Iowa, where Clinton led 42% to 39%.

And while Trump still has some work to do to win Wisconsin, another Midwestern battleground, a Marquette University Law School poll Wednesday found him within striking distance in the Badger State, taking 41% of the vote to Clinton's 45%.

Things look a bit bleaker for Trump in two other swing states: In Colorado, new polls from Monmouth University and Fox News found Clinton leading by 13 points and 10 points, respectively, while Fox found Clinton with a 44% to 37% advantage in Virginia.

If Clinton solidifies her lead in those states — which presidents George W. Bush and Barack Obama both won twice — Trump's path to 270 electoral votes becomes much narrower.

It's long been clear that it will be much more difficult for Trump to confound prognosticators in the general election the same way he did in the GOP nominating process. But for anyone who thinks it's out of the question, the latest polling offers a useful corrective.