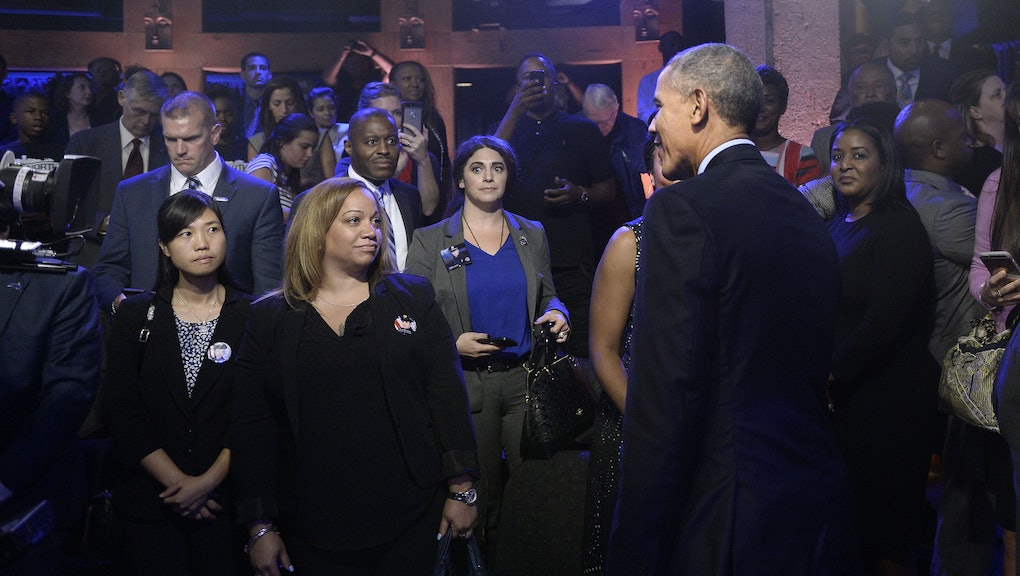 At Obama's Town Hall, He Talks About Race and Policing Without Using the Word "Racism"

At least 421 black people have been killed by American police officers since the start of 2015, yet the first black Commander-in-Chief has repeatedly avoided confronting their plight head-on. He's paid lip service to biased policing and its ills, but rarely stood publicly with its victims. All while going out of his way to maintain a copacetic relationship with law enforcement, most recently speaking at the funeral for officers killed in Dallas but deigning to visit Baton Rouge, Louisiana, or Falcon Heights, Minnesota, where two black man were shot dead by police just last week.

This reticence, critics say, has been a defining feature of his presidency — as has his avoidance of the terms "racism" and "white supremacy."

"Obama and his cheerleaders should take responsibility for being so reluctant to engage with these issues," Dr. Cornel West wrote in a scathing op-ed for the Guardian this week. "Unfortunately for so much of the Obama administration it's been a question of, 'I'm not the president of black people, I'm the president of everyone.'"

Thursday was Obama's chance to silence these critics. One week after the video-recorded police shootings of the aforementioned men — Alton Sterling and Philando Castile, respectively — and the killing of five police officers at a protest in Dallas, the president agreed to participate in a televised, town hall-style convening to discuss the state of race relations in America.

Perhaps more than anything, it was a chance to finally name racism and white supremacy as America's collective enemies — particularly in the waning, increasingly DGAF months of his presidency.

So, did Obama deliver? In a word: no.

Instead, he reaffirmed that "Americans need police" (a claim that a growing number of advocates have disputed, by the way). He also fielded questions from one man — Texas' Lt. Governor Dan Patrick — who suggested the president hadn't done enough to show he supported police officers, and wanted him to hang blue lights on the White House in solidarity. Obama also addressed the concerns of a Baltimore officer's mother, who, in a room of black mothers whose children had been killed by police, unabashedly asked how her son was "supposed to feel safe" while protesters were throwing water bottles at him.

In other words, Obama's showing Thursday confirmed what critics have been saying about him. At the same time, despite their critiques, it's inaccurate to suggest the president has done nothing at all about this issue.

Because he has. He assembled the President's Task Force on 21st Century Policing — which Obama established after a grand jury declined to indict former-Ferguson, Missouri, police officer Darren Wilson for killing Michael Brown, a black 18-year-old, in November 2014 — a robust group of thinkers, scholars, activists and policymakers who would put forth recommendations for nationwide police reform.

Of course, whether these get implemented in actual police departments is yet to be seen. Meanwhile, his My Brother's Keeper initiative has been received less warmly: it established community programs to address achievement disparities facing young black men, but critics say it fatally ignored issues facing young black women, all while veering dangerously close to peddling in respectability politics.

In these contexts, it's worth reflecting on how Obama has responded to previous high-profile police shootings of black men. A look at his official statements and responses reflect a tacit acknowledgment that America has a problem with racist policing, which he alluded to Thursday as well.

Here are some of his responses:

"[Law] enforcement has an incredibly difficult job; that every man or woman in uniform are putting their lives at risk to protect us; that they have the right to come home, just like we do from our jobs; that there's real crime out there that they've got to tackle day in and day out -- but that they're only going to be able to do their job effectively if everybody has confidence in the system."

After more than a week of protests against the shooting of Michael Brown by Officer Darren Wilson in Ferguson, Missouri, Obama said the following at a press conference:

"While I understand the passions and the anger that arise over the death of Michael Brown, giving into that anger by looting or carrying guns, and even attacking the police, only deserves to raise tensions and stir chaos, it undermines, rather than advancing justice ..."

Freddie Gray died from spinal damage sustained in the back of a police van in Baltimore in April 2015. His death, and the unrest that followed, prompted the following response from Obama later that month:

"This has been going on for a long time. This is not new, and we shouldn't pretend that it's new. The good news is that perhaps there's some newfound awareness, because of social media and video cameras and so forth, that there are problems and challenges when it comes to how policing and our laws are applied in certain communities and we have to pay attention to it."

It's also worth noting that Obama referred to rioters as "criminals and thugs who tore up the place" — a framing he stood by later, according to his press secretary, Josh Earnest.

Obama did not make an official statement about Walter Scott, who was shot in the back by a police officer in North Charleston, South Carolina. However, his press secretary, Josh Earnest, suggested the president had seen footage of the incident:

"The video is awfully hard to watch," Earnest reportedly said.

After video footage was made public of the 2014 Chicago police shooting of Laquan McDonald, Obama made the following statement on Facebook:

"Like many Americans, I was deeply disturbed by the footage of the fatal shooting of 17-year-old Laquan McDonald. This Thanksgiving, I ask everybody to keep those who've suffered tragic loss in our thoughts and prayers, and to be thankful for the overwhelming majority of men and women in uniform who protect our communities with honor. And I'm personally grateful to the people of my hometown for keeping protests peaceful."

Obama came the closest to acknowledging serious racial bias in American policing, generally, during his statement on the back-to-back deaths of Sterling and Castile. From his July 7 statement:

"All Americans should be deeply troubled by the fatal shootings of Alton Sterling in Baton Rouge, Louisiana and Philando Castile in Falcon Heights, Minnesota. We've seen such tragedies far too many times, and our hearts go out to the families and communities who've suffered such a painful loss."

Overall, Obama's responses to these shootings have proven generally disappointing to critics.

Tef Poe, a rapper and activist from Missouri, went so far as to call the president's silence around Ferguson his "Katrina" moment. While this may seem exaggerated in retrospect — Obama doesn't seem to have been damaged by his response to Michael Brown's death, in a broad sense — it's safe to say his dealings with racialized police violence betray a perhaps-startling unwillingness to name a problem that has become so obvious to many.

Specifically, confronting racism and white supremacy with openness and honesty are central to understanding, addressing and dismantling police violence in America. Whether Obama ever mentions them, in this particular context, at any point over the rest of his presidency is yet to be seen — but rest assured, Americans will be watching closely.