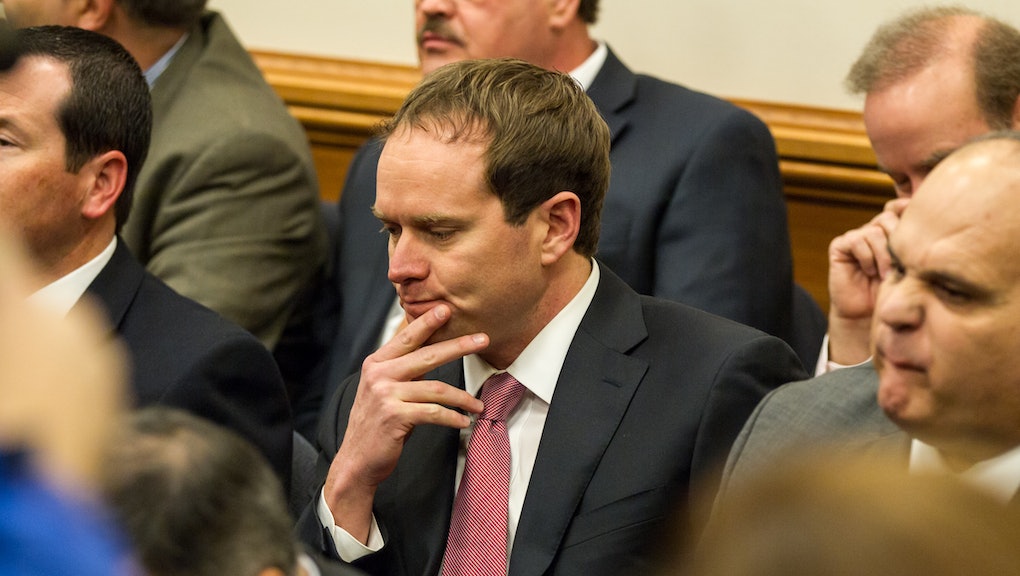 Tennessee Rep. Jeremy Durham has been called some interesting things in his day. A "risk to unsuspecting women." "Pants Candy." Please allow us to explain.

After a Tennessean investigation into inappropriate text messages he'd sent female colleagues, Durham, a committed opponent of trans people using bathrooms, stepped down from his position as majority whip for the Tennessee House of Representatives in early 2016.

It turns out the texts were just the tip of the iceberg. A new report reveals Durham allegedly sexually harassed at least 22 women.

The investigation: A committee convened by the Tennessee Attorney General's office made 180 phone calls that led to interviews with 78 individuals who were largely "fearful of losing their jobs, retaliation or of being perceived as 'untrustworthy'" by coworkers. Yet men and women alike testified to Durham's pattern of sleazy behavior.

Here are the details from the committee's report:

(1) he occupied a superior position of power to the women he approached; (2) he obtained personal contact information from the women in his capacity as a legislator or under the guise of legislative business or another legitimate reason; (3) he initiated contact about non-legislative matters and attempted to meet women alone; (4) he often used alcohol in his interactions with the women; and (5) he made inappropriate comments of a sexual nature or engaged in inappropriate physical contact with some women.

Durham's offenses include touching, ogling, uncouth commentary and "you up?" messages sent to Jane Does between 2012 and 2016. For instance, he tried to entice Jane Doe No. 63 to meet him between Thursday and Sunday, when his roommate would be gone and he'd be "super bored." Durham is married, so it's fair to speculate that when he said "roommate," what he meant was "wife."

According to the Tennessean, the committee judged Durham's actions as "repulsive" but did not move to expel him, leaving that question for his constituents to decide in the upcoming August 4 primary.

But why "Pants Candy"? That cute nickname comes from a particularly strange incident in which Jane Doe No. 9, identified in the report as a lobbyist, visited Durham's office and asked if she could have a candy from the dish he kept on his desk. In response, "He reached into his pocket, rummaged around in it, and pulled out an unwrapped, dirty mint, and said, 'You don't want those. I've got this.'"

The whole interaction is unquestionably odd, and according to another John and Jane Doe, "an attempt to draw attention to his genitalia," presumably as the candy she desired. (He made a similar reference to Jane Doe No. 30.) Thereafter, Jane Doe No. 9 called Durham "Pants Candy."