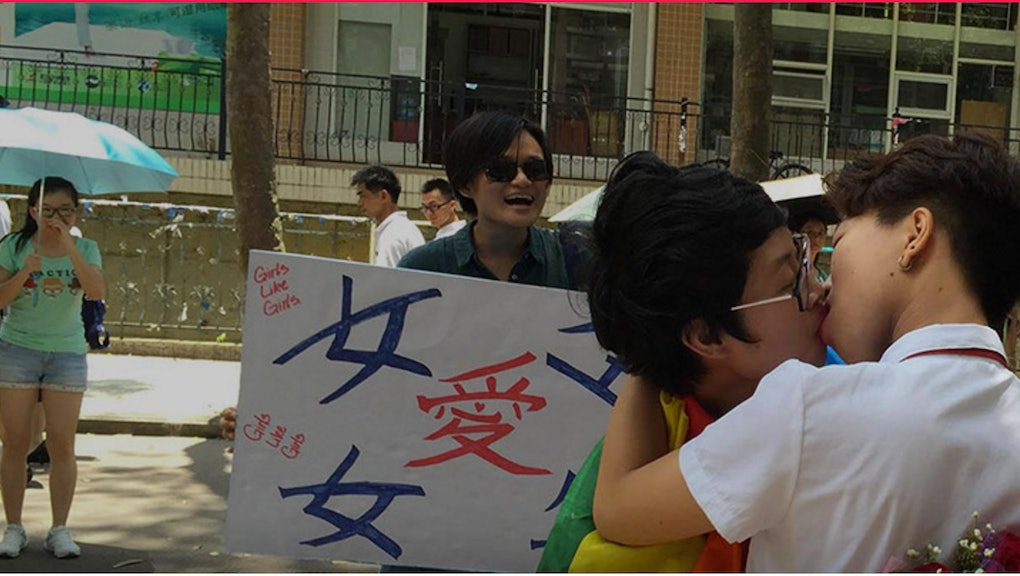 Xiayou Wang, a Guangdong University of Foreign Studies graduate, says the most romantic day of her life turned into a nightmare.

After pictures of a June 21 marriage proposal between Wang and Juan Ouyang went public, the university denied Wang her diploma and outed her as a lesbian to her parents, according to Global Voices.

China Digital Times reported that the pictures were taken down later that day from an LGBT group's page on Weibo, a Chinese microblogging site.

In a letter listed on All Out, an LGBT-focused social movement website, Wang is asking people to sign her petition that asks the university for a public apology after they denied her a diploma. A school official didn't give it back until June 28, according to Global Voices. Wang's girlfriend proposed on graduation day, a tradition among the university's students.

"But not if you're a lesbian," Wang wrote on the petition. "After photos of our proposal went viral, party officials at Guangdong University of Foreign Studies threatened to withhold my diploma, saying we should 'keep our homosexuality to ourselves and don't pester others.'"

Global Voices also reported that a school official tried to intimidate Wang's family into allowing them to search her apartment.

LGBTQ people and allies throughout China took selfies of marriage proposals to show solidarity with Wang and her fiancé.

Chinese website Sixth Tone asked a school official to comment, but reported that he declined and instead said, "Don't you feel bad about disturbing our work like this?"

"When it comes to education on sexuality, China is behind the times," LGBTQ activist and head of branding at PFLAG China Zhou Ying said to Sixth Tone.

Wang asks that the university apologize and to make sure that this does not happen again.

"I'm devastated and humiliated, but I'm fighting back and need your help," she wrote.