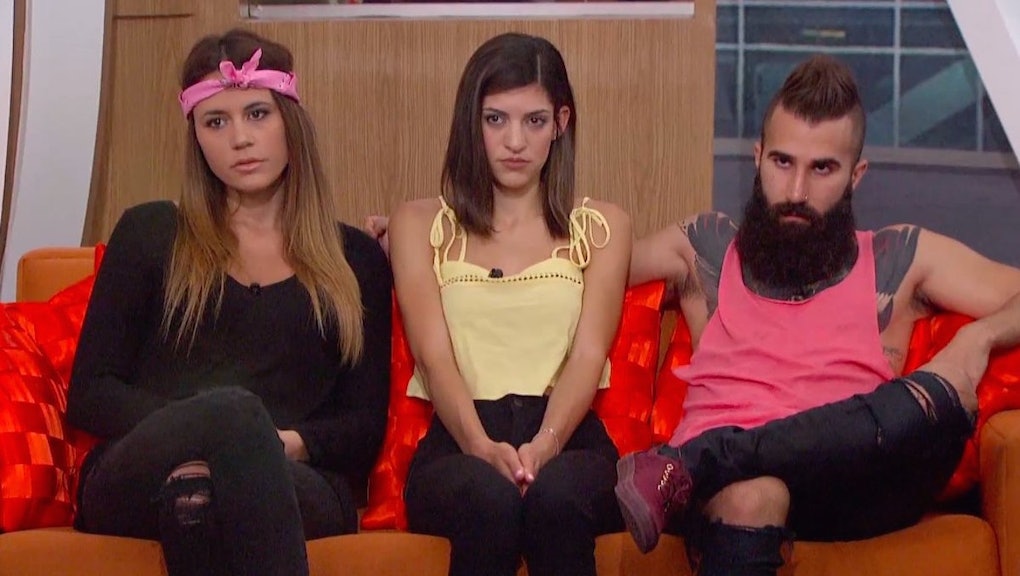 'Big Brother 18' Episode 11 Recap: We Got Ourselves a Good Old-Fashioned Blindside

Faced with the choice between a Spy Girl, a sibling and a three-time nominee, the Big Brother houseguests turned the tides and voted out the unexpected. That's right, folks: We got ourselves a good old-fashioned blindside.

On Wednesday's episode, current Head of Household Bridgette won the Power of Veto and kept the nominees (Tiffany, Paul and Bronte) the same. Although Bridgette's original plan was to take her fellow Spy Girl alliance member Bronte off the block, she didn't want to take the risk that their other alliance member, Natalie, would be put up by the Road Kill winner in her place.

This week, after a veritable chess match full of last-minute moves, Bronte was voted out. The vote was 5-4-0 (for Bronte, Tiffany and Paul, respectively). Her elimination means the Category Four team remains the only one with all four members left; Unicorn is down to two members: James and Natalie.

Da'Vonne masterminded a plan to keep Vanessa Rousso's sister Tiffany around and send out Bronte instead. It required Zakiyah's support — and at first, she was fully ready to flip. "I'm about it," she said. "I'm on board."

But after talking to Paulie, she and the other members of the blindside-planning squadron wavered. "Long-term, Bronte's not winning anything," Paulie argued. You know who can win, he said? Tiffany. "She's strong. She's a strategist."

Ultimately, after some convincing, Paulie and Co. switched their votes, sending Bronte and her high-pitched voice home. Tiffany stayed, but not before delivering a speech that can only be described as a barn-burner. She took shots at Frank, saying he spent the week spewing "cow manure" and pledged to only go after Frank the "dictator and his little Cabbage Patch Kid," Bridgette.

Before the vote, Frank spent the bulk of the episode masterminding Da'Vonne's exit next week. But he overplayed his hand when he mentioned potential plans to get Da'Vonne out to Michelle. He even spilled that Nicole was on board. "She's drama, and she's gonna want to make a big move," he told Michelle.

Michelle, naturally, took that information right back to Da'Vonne — who didn't trust Nicole's excuse that Frank was lying. Nicole, meanwhile, was annoyed with Frank, and she declared she won't be working with him in the future.

The episode ended with a European vacation-themed Head of Household competition called "Euro Trippin.'" Bridgette, as the previous Head of Household, could not compete, but the rest of her team could.

"Euro Trippin'" was a memory competition in which the houseguests had to answer true or false questions about a series of photos of eliminated houseguests Jozea, Glenn and Victor. The pictures, all digitally altered, depicted the trio in various European locales.

Only Paulie, Frank and Nicole remained after three questions, with the two returnees answering the fourth question incorrectly. This left Paulie as the last man standing — and the new Head of Household. Paulie's win also gives his team, Category Four, immunity for the week. Since theirs is the largest team, this leaves only eight potential nominees eligible for eviction. Frank, Michelle and Bridgette are all safe. Considering most of the house was gunning for Frank next week, this complicates their plans.

The next episode, in which Paulie will nominate two of his fellow houseguests, airs Sunday at 8 p.m. Eastern on CBS.