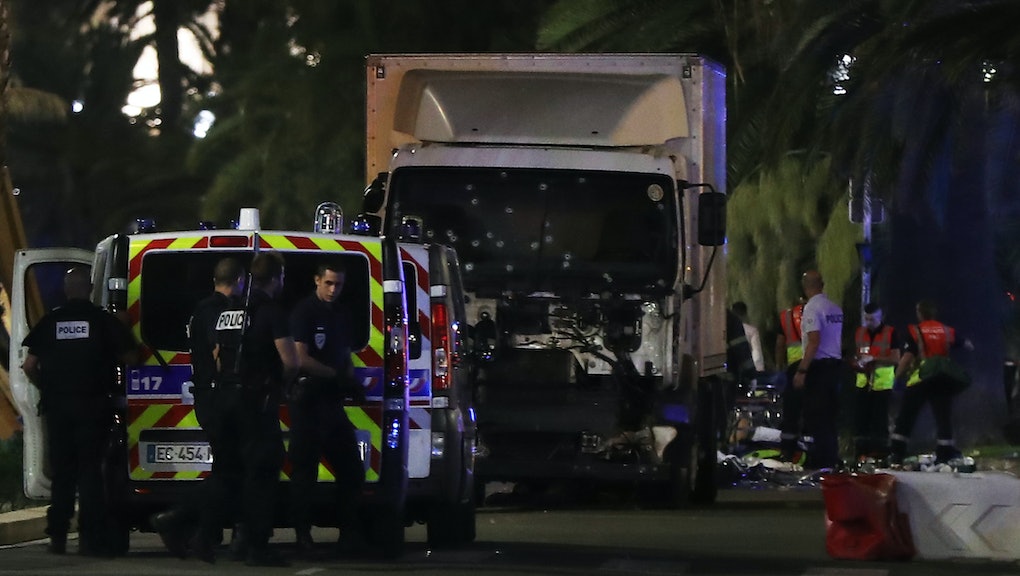 Eighty-four people were killed and as many as 18 were left in critical condition, according to the French Interior Ministry, after a truck drove into a crowd of people celebrating Bastille Day Thursday night in Nice, France, the Associated Press reports. Two Americans were among those killed, according to the state department, the AP reported in a tweet on Friday. Dozens more were wounded in the attack, which French President Francois Hollande later called "terrorist" in nature.

The driver of the truck drove down the crowded Boulevard des Anglais and allegedly fired shots before driving two kilometers through the crowds, CNN reported, citing comments made to affiliate BFM-TV. The driver was reportedly shot dead by police.

The truck "was loaded with arms and grenades," according to regional official Christian Estrosi, the Associated Press reported in a tweet on Thursday.

The AP tweeted that a French official called the truck crash "an attack." The crash shattered what had been a day of celebration in the city. According to Reuters, the truck hit crowds of people gathered to watch Bastille Day fireworks — and the violence reportedly began around 10:30 p.m. local time, just as the fireworks display was ending.

"White truck literally racing through crowds of all ages. People either caught in path or forced to jump onto rocks over beach barrier," Andrew Botros, a witness to the attack, told NBC News on Thursday. "Some dead. Horrific."

A tweet from Estrosi sent shortly after the attack reportedly said, "Dear Nice residents, the driver of a truck appears to have caused tens of deaths. Stay for the moment in your homes. More info to come," according to a translation from CNN.

Eyewitnesses to the incident told CNN the large truck "appeared to accelerate" as it hit people in the crowd. Video taken that night shows the crowd running as panic breaks out.

"We started running for cover. People started jumping from promenade level onto the beach," Eric Dratell, a London-based American who was on vacation in Nice with his wife, told NBC News. "We took shelter with 200 or more people in an area under the promenade. People were in crowded toilet stalls."

A tweet from Radio France Internationale said the truck driver had been shot dead. A local news source published a photo of a truck with bullet holes in it, Reuters reported.

Pierre-Henry Brandet, a spokesperson for the French Interior Ministry, said the occupant of the truck who was fatally shot by police was the driver, CNN reported, and at no point in the night were hostages taken. The AP reported in a tweet that the French prosecutor's office had opened a terrorism investigation into the incident.

Only hours before the attack in Nice, French President Francois Hollande, speaking after attending a Bastille Day parade, announced the country's state of emergency would be lifted July 26, the Associated Press reported.

"We cannot prolong the state of emergency eternally," Hollande said, according to AP. "Is the threat there? Yes."

Early Friday morning local time, Hollande spoke about the attacks, announcing the country's state of emergency would be extended by three months, the AP reported in a tweet. France will also observe 3 days of national mourning following Thursday's attack, the AP reported.