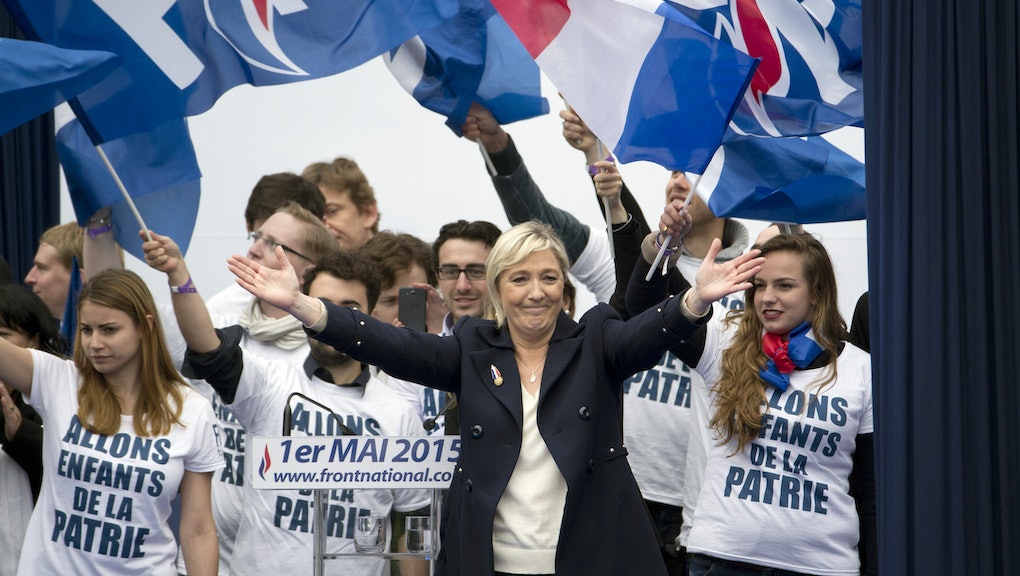 The terrorist attack in Nice late Thursday night, which left at least 84 dead and 100 injured after suspect Mohamed Lahouaiej Bouhlel drove a truck through crowds gathered to watch Bastille Day fireworks, marks France's third such attack in a roughly 18 month period: Charlie Hebdo, the Paris attacks and now this.

And in the wake of each horrific act of violence, Marine Le Pen, president of the right-wing populist National Front party, finds support. As many of the perpetrators of recent terrorist attacks — not just in France, but across the world — continue to be self-described Islamists, Le Pen has consistently made "Islamic fundamentalism" the enemy.

Shortly after Thursday's attack in Nice, Le Pen tweeted the following: "Again France is plunged into horror. Thoughts for the victims. The fight against Islamic fundamentalism must start MLP #Nice."

Four hours later, she tweeted a link to a statement on the events in Nice. "Find my reaction to the attack of #Nice06," Le Pen wrote.

Her statement, an excerpt of which is translated below, calls for war on Islamic fundamentalism:

"The war against the scourge of Islamic fundamentalism has not started; it is urgent now to declare. We really commit by implementing a series of measures that I have already detailed, which I shall have occasion to return, designed to tackle the source of the phenomenon.

A number of French users across the social media platform echoed her sentiment, praising and retweeting Le Pen's words.

"@MLP_officiel Yes, Madam Le Pen, entirely with you. The fight against Islamic fundamentalism must start!" Denis wrote, tweeting support at the politician.

"My thoughts for the victims of the attack in Nice at their families," François Meunier tweeted. "We must finally combat Islamic fundamentalism."

"'The war against the scourge of Islamic fundamentalism has not started; it is urgent now to declare.'"

"'The fight against Islamic fundamentalism must start MLP #Nice.'"

Just days after the Paris attacks last November, Florian Philippot, Le Pen's adviser and National Front vice president, evinced the party-wide, anti-Muslim sentiment, calling for a ban on migrants. The rhetoric was not unlike Trump's call for a "total and complete shutdown" of Muslims entering the United States less than a month later.

"It really poses the question that we have been asking, that [Islamic extremists] will infiltrate the migratory flux that is arriving in Europe," Philippot said, according to the New York Times. "It is irresponsible to continue this welcoming of migrants."