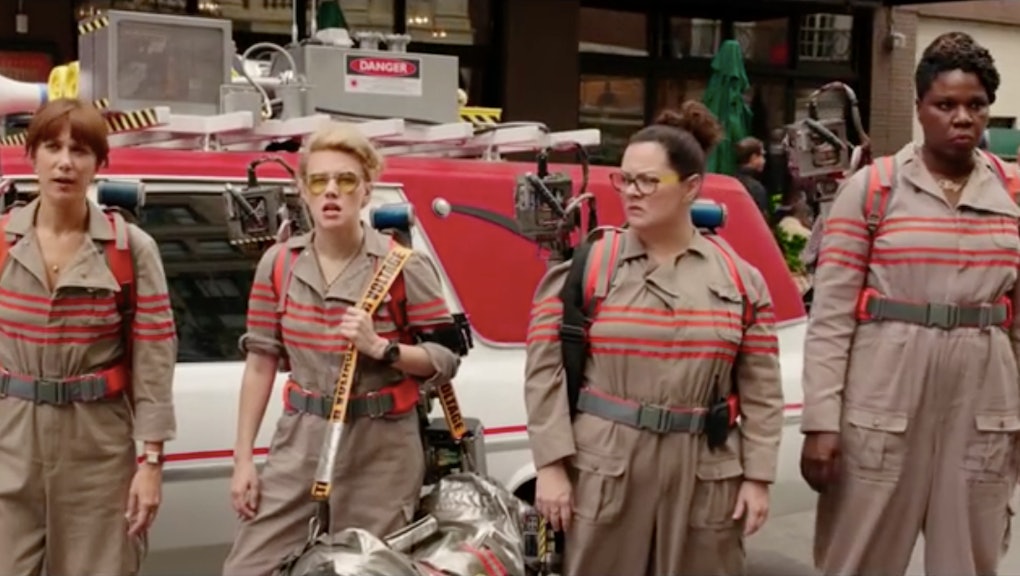 After all the frenzy caused by male movie buffs, the remake of Ghostbusters is finally playing in theaters across the country. The film's leading ladies are blasting through the sexist stigma surrounding women's bodies with a burst of fresh air — a queef, to be exact.

The new flick sets the tone right away with a queef joke, which screenwriter Katie Dippold revealed was controversial in the writers' room.

"It's not like I thought that one day I would be fighting for a queef joke, but it was a big debate," Dippold told W magazine. "Fart jokes have been in movies for years. If the only thing offensive about this is that it comes from the vagina, I'm like, 'That's on you!'"

For the uninitiated, queefs are odorless bursts of air expelled from the vagina during vigorous sex or exercise. They're not a result of promiscuity, as some men wrongly believe, and they're not related to bacterial activity in the gut, like a fart. In fact, pretty much every person with a vagina queefs from time to time.

Yet because Hollywood rarely features bodily humor from a woman's perspective, queef jokes in pop culture are rare — even though fart, dick and poop jokes are considered staples of cinematic comedy.

In the few instances of films openly referencing queefing, the jokes are usually made at women's expense. Take, for instance, a queef joke in the Ben Stiller movie The Heartbreak Kid, in which the vaginal puff is meant to show how unromantic married life can be.

The South Park episode "Eat, Pray, Queef," took a slightly more progressive approach, ending with one of the characters making a tongue-in-cheek speech mocking men for feeling uncomfortable about queefs. Some male critics, however, were unamused.

"Is the big idea that there's some kind of double standard because men find farts funny but queefs disgusting?" wrote critic Travis Fickett. "There's so little goodwill left for the episode that it's nearly impossible to care."

So far, viewers seem to be divided about the queef joke in Ghostbusters' move. On Twitter, some users found it refreshing, while others found it horrifying:

Clearly, Ghostbusters' attempt at equal opportunity bodily humor has struck a nerve with some viewers — yet such sexist attitudes toward women's bodies belong in the past. It's okay to to giggle at queefs, as Ghostbusters does — so long as we are laughing along with women, not at them.