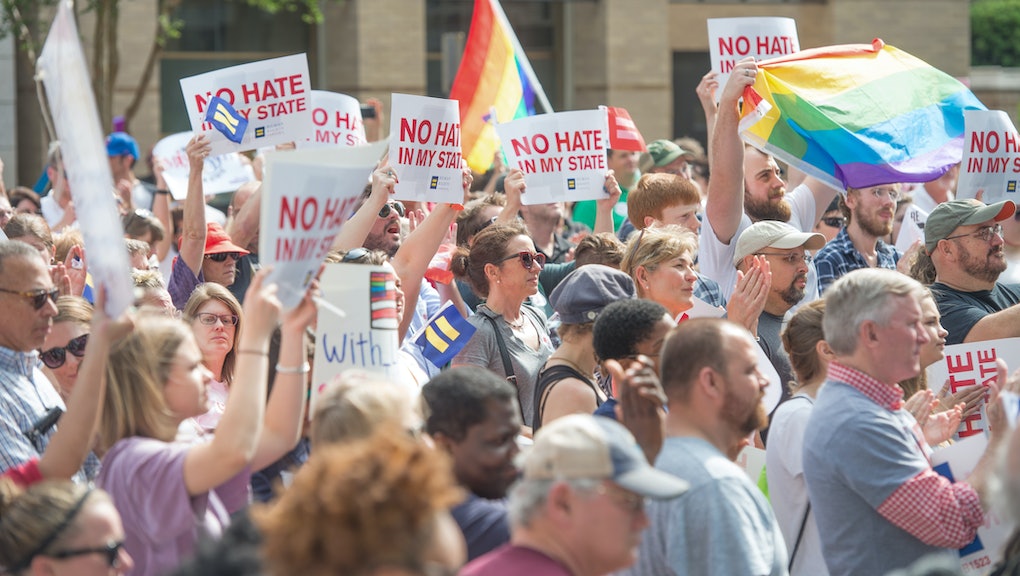 A combination of factors, including discriminatory hiring practices, unequal pay and shorter life expectancies, mean LGB people may not be earning as much as they deserve — and it could be holding back the global economy to the tune of more than a hundred billion dollars a year.

According to Lamontagne's findings, which haven't yet been published, homophobic laws and social norms could be costing Western Europe and North America nearly $50 billion of combined gross domestic product each year. The economic cost of homophobia in sub-Saharan Africa could be up to $4.9 billion.

Worldwide, we could be losing a total of up to $119.1 billion of GDP, according to Lamontagne.

And that's just the beginning: Lamontagne's results only reflect homophobia against gay men and other men who have sex with men, or MSM.

"These figures are underestimating the real cost of sexual orientation-related stigma," Lamontagne said in an email. "[The] figures would be higher if we could account for LBTI and effeminate men."

The lack of sufficient data on transgender populations "limits the projection we can do at this stage," he continued. "I will try to include them in a future model."

Why homophobia hurts the economy

Homophobia can result in fewer earnings — and fewer employment opportunities — for lesbian, gay and bisexual folks. That means less money going toward a country's GDP.

In the U.S., gay and bisexual men earn 10 to 32% less than similarly qualified heterosexual men, research has shown. This recent study found women with an "LGBT indicator" on their resume were 30% less likely to get a call-back after a job interview. And there are still U.S. states where you can be fired for being LGBTQ.

Homophobia can also cut short the number of years LGB people are able to work — which means they have fewer years to accumulate earnings, Lamontagne pointed out.

Anti-LGB discrimination has also been linked to shorter lifespans. Stigma contributes to mental health issues among LGB people, and LGBT folks are also more likely to attempt suicide than the non-LGBT population. LGBT people may also be victims of hate-based violence, as we saw in Orlando.

In certain parts of the world, homosexuality can result in jail time. In 10 countries, it can even be punishable by death.

"As an economist, I see life expectancy as life where you can earn money," Lamontagne said in an interview following his presentation.

Past studies have calculated how much homophobia hurts the economy — but they've focused on individual countries, Lamontagne said in an interview following his presentation.

A case study in India determined homophobia cost the country 0.1 to 1.7% of its GDP, the Wire reported. Another study, in Canada, measured the economic cost of health issues related to discrimination against lesbians, gays and bisexuals. Depression was found to cost Canada's economy up to $2.3 billion; alcohol abuse cost up to $4.1 billion.

Lamontagne took a more global approach. He has a consistent way to measure the economic cost of homophobia against MSM around the world.

It's called the Homophobic Climate Index. The HCI takes into account a country's laws against homosexuality, as well as its levels of "social homophobia" — everyday instances of discrimination, such as hearing derogatory slurs.

This heat map uses Lamontagne's data to show the most inclusive and homophobic countries:

Using the HCI and other data, Lamontagne determined the economic cost of homophobia for various regions around the world. Homophobia may be costing Asia and the Pacific up to $88.29 billion combined, Latin America and the Caribbean up to $8.04 billion, Eastern Europe and Central Asia up to $10.85 billion and the Middle East and North Africa up to $16.92 billion.

"In simple terms, the more homophobic you are, the more and more it will cost your economy," Lamontagne said, commenting on the shape of the graph. "If you double the level of homophobia, you don't double the cost — you more than double the cost."

Will Lamontagne's findings spur governments to change their laws? First they have to be published, he said — but then, he hopes activists will use his data for their advocacy work.

"They should use these kinds of things to say, 'You, my friend, the parliamentarian: Do you see how bad we are, for how we are located?'" Lamontagne said. "'Why are we accepting this law?'"

Perhaps Donald Trump should listen up. If the presumptive Republican presidential nominee is the "businessman" he says he is, selecting a notoriously anti-LGBTQ running mate like Mike Pence might have been a bad idea.

Jordyn Taylor reported from South Africa on a fellowship with the International Reporting Project.