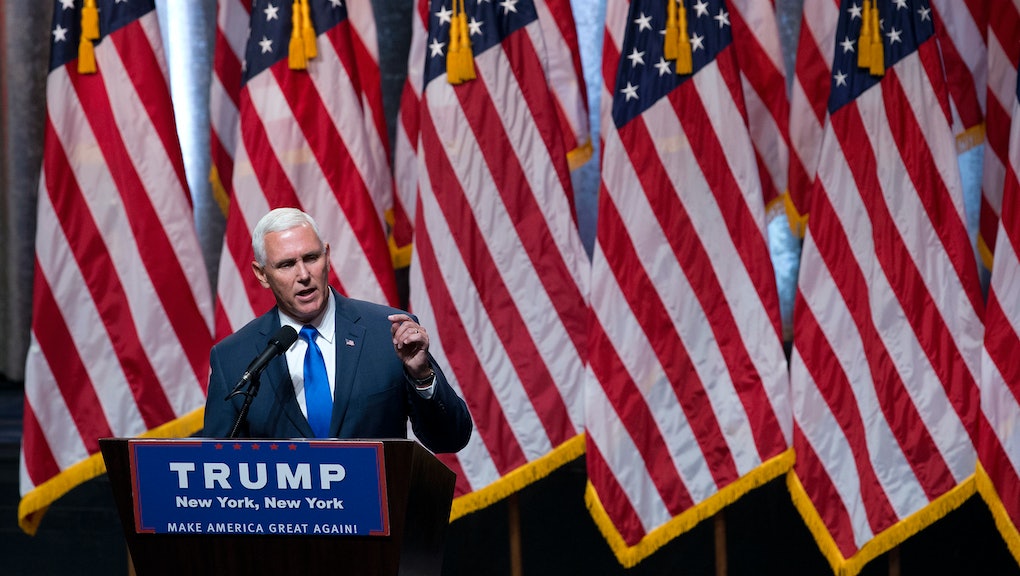 It's a choice that makes sense for many reasons, including bolstering Trump's conservative credentials — Pence is well known for his anti-abortion views and small-government economic conservatism. But there's one issue on which the real estate billionaire and the Midwestern governor appear to have a less-than-ideal amount of common ground.

In December 2015, when Trump announced his plan to ban all Muslims from entering the United States, Pence responded by tweeting the proposal was "offensive and unconstitutional."

Around that same time, Pence told reporters he opposed resettling Syrian war refugees in Indiana — having recently signed an order suspending such migration — but reiterated the ban was too extreme for him to endorse.

"I do strongly disagree with the call that would ban Muslims from this country," Pence said, according to the Journal Gazette. "My concern with the Syrian refugee program has to do with the country of origin. It has to do with the fact that Syria is a war-torn country whose own regime has been exporting terrorism for years ... This is about public safety. It's not about identifying individuals on the basis of nationality."

By Saturday, however, Pence claimed he had never been out of sync on the issue and said he had been "very supportive of Donald Trump's call to temporarily suspend immigration from countries where terrorists' influence and impact represents a threat to the United States."

There are some early indications the two candidates aren't a match quite made in heaven. Trump reportedly spent much of Thursday night trying to get rid of Pence at the last minute. At Pence's announcement ceremony, the New York Times reported, Trump dominated the podium, giving Pence just 12 minutes to speak. The real estate billionaire and the governor left for separate campaign appearances and will not reappear together until sometime next week. As Mother Jones points out, Pence and Trump also have major disagreements on free trade.