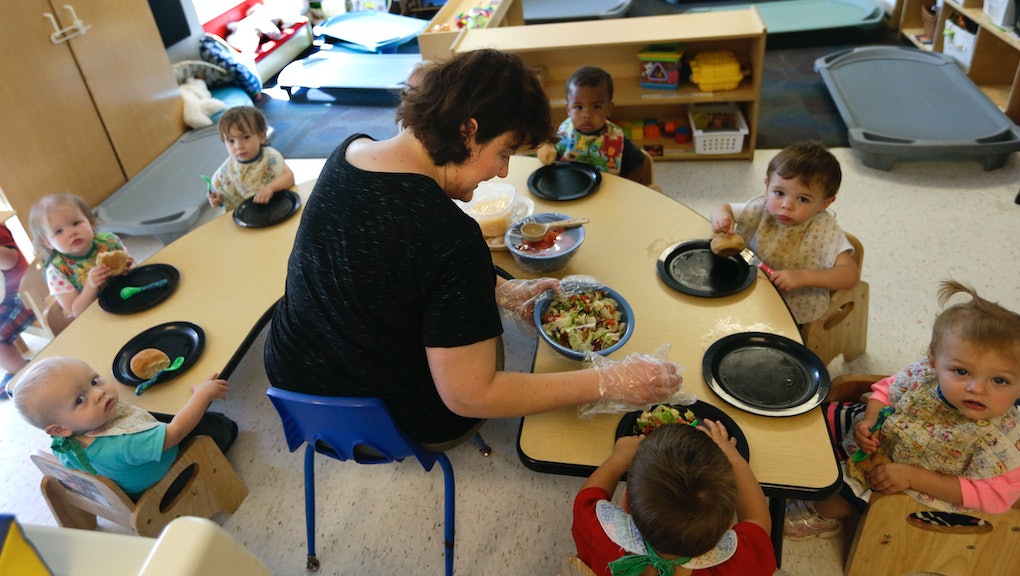 Why Is the Cost of Childcare Rising While Workers' Wages Are Dropping?

Forget flat wages: Earnings for childcare workers have actually been dropping — in three quarters of U.S. states over the last 5 years — according to research from the University of California, published last week and reported by Bloomberg.

The drop in median hourly wages since 2010 for those who care for young children has been about 3% nationally (adjusting for inflation), but workers in certain states have it especially bad: childcare wages have dropped by 12% in Rhode Island and 10% in Michigan in the last half-decade.

Setting aside the social and economic implications of this problem, you'd think that this would at least mean cheaper prices for parents, right?

Wrong. The cost of childcare for families with working mothers has risen by at least 70% since the 1980s.

Childcare is already prohibitively expensive for many Americans. Not even counting rent and food, a minimum wage worker in Hawaii, for instance, would have to devote all wages from working full-time from January through September to just cover the costs of care, according to the Economic Policy Institute.

That same study also found that childcare costs exceeded rent in 500 out of the 618 regions examined in the study.

There are a numerous theories about why day care is so expensive. One is that the government has yet to create a comprehensive program: Unlike other government programs like Social Security or welfare, there's no precedent for consistent federal funding aimed at offsetting childcare costs.

Traditionally, government funding for daycare has come in "fits and starts," usually as a response to a pressing social problem. For instance, funding was robust during World War II, when many women had to enter the workforce, but was cut once the war ended.

France, by contrast, has an extensive web of subsidies and programs aimed at helping young families, which are top-of-line and often completely free.

Another theory is that childcare is much more heavily regulated than other industries, probably for good reason.

Just last May, New York City released a new report card system for ranking daycare centers, after a New York Daily News investigation revealed numerous safety issues. Keeping up with new regulations might be preventing childcare providers from being able to pass on any savings.

Why you should care

Quality child-care can have lasting impact on both children and their families. Research shows that even just attending pre-school has a long-term impact on your earnings.

A 2014 study commissioned by the White House found that attending pre-school increased your earnings in adulthood by between 1.3 and 3.5%. Based on that figure, many argue that government-funded day cares would essentially pay for themselves by growing the future earnings of their students and increasing the tax base.

As with a lot of economic issues, access to childcare also exacerbates income inequality as wealthier families spend more and more on programs that help kids earn more later on. Studies have shown that in residential areas of high income inequality, educational attainment among rich children is on the rise while educational attainment amongst poorer children is on the decline.

But the biggest consequences of inadequate access to childcare affect poor families. The median cost of yearly childcare is about $18,000, about $4,000 less than the entire median income of single-parent homes.

When you can't afford reliable daycare, then you're more likely to take time off work — often on short notice — which lowers your earnings even further.

How this affects the wage gap

Inadequate access to childcare is also a major contributing factor to the wage gap, where women still earn roughly $0.83 on the dollar compared to men.

More than three-quarters of mothers say that they've scaled back, changed jobs, or quit working entirely in order to attend to their children, according to a 2015 poll from The Washington Post.

Half of dads said that childcare factored into their job choice as well.

Even leaving the workforce and coming back — aka taking maternity or paternity leave — can have a huge impact on future earnings. According to a study from the Center of American Progress, a woman making $30,000 a year loses out on almost half a million dollars in earnings if she takes just five years off.

If you don't have kids, you're probably not stressing over the tuition fees at your local daycare. However the research linking childcare-access to issues ranging from income inequality to the pay-gap suggests this is an issue that already affects millennials much more than they realize.