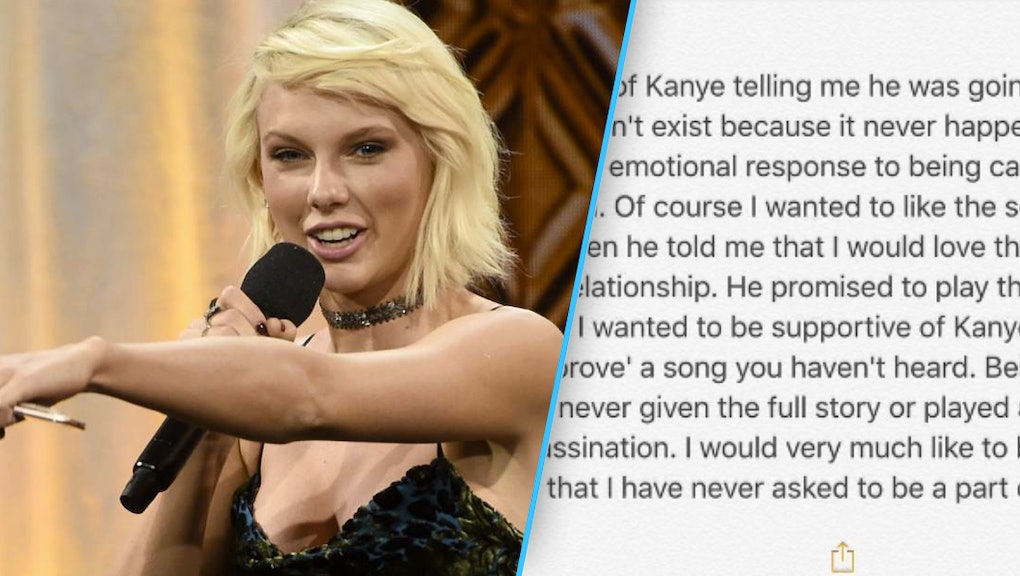 "Search": This One Word in Taylor Swift's Viral Note Has Conspiracy Theorists Going Off

On Sunday night, Kim Kardashian West set the internet ablaze when she Snapchatted a video that appears to show beyond a shadow of a doubt that Taylor Swift consented to being called out in Kanye West's "Famous."

You know the line: "I feel like me and Taylor might still have sex/ I made that bitch famous."

Taylor clapped back that same night, Instagramming what appears to be a iPhone Notes screenshot that attempts to debunk Kim's Snapchat, and claiming that the video doesn't show her consenting to being called "that bitch" in "Famous."

Cue the fireworks. It seemed that Taylor had just escalated a feud into a full-blown war. BUT, as Jezebel pointed out on Monday, Taylor's Instagram may actually contain a clue that she was in on the entire drama.

Yes, that's right — can you spot the one word that may indicate that this entire drama has been cooked up by Taylor, Kanye and Kim all working together?! If you look up at the top corner of the note, there's a "Search" button, which suggests that Taylor had prewritten the note and then pulled it up when Kim snapped the video of her conversation with Kanye.

The question is, why would Taylor have such a specific, defensive note ready to go? Did Taylor know that Kim was going to Snapchat her phone conversation with Kanye? Did she engineer the whole thing along with Kimye to try and drum up publicity? Is the entire thing part of an elaborate plan for world domination?