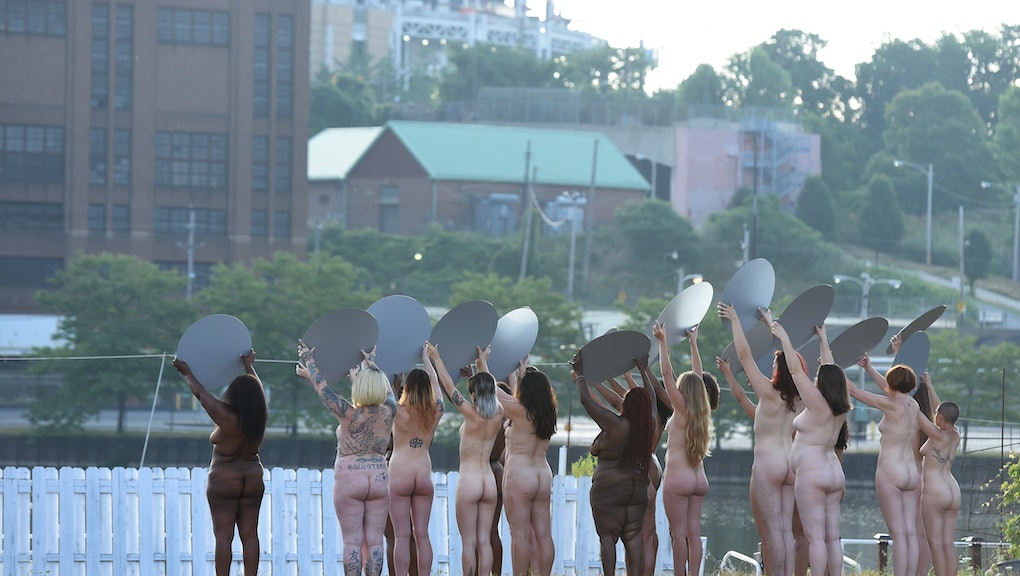 More than 100 nude women showed up directly across from the site of the 2016 Republican National Convention on Sunday as part of photoshoot organized by photographer Spencer Tunick.

The women gathered in a vacant lot across from the Quicken Loans Arena, where the RNC is being held this week, reported Esquire, and held up mirrors facing the spot where, the next day, thousands of Republicans would gather to discuss the fate of the GOP and formalize the nomination of Donald J. Trump.

The piece, titled "Everything She Says Means Everything," was meant to symbolize "the belief that we will rely upon the strength, intuition and wisdom of progressive and enlightened women to find our place in nature and to regain the balance within it," according to the project's official website.

Tunick originally announced his plans for the project and began recruiting participants back in May. The final turnout on Sunday was a powerfully diverse group of women, reported Esquire, cis and trans, old and young — there were even Republicans.

"Donald Trump has said so many outrageous, hateful, inflammatory things," Cathy Scott, a participant in the photoshoot and a Republican voter, told Esquire on Sunday. "He underestimated his female, Republican vote. I feel like he shot himself in the foot a little bit. I don't think he knows there's a black, single, 35-year-old mom, like me, who is listening to what he's saying. I don't think he knows I'm in his political party — and that's unfortunate."

In an anonymous statement on the project's website, one participant explained her reason for being a part of the photoshoot: "People should be treated as equals and since the 2012 election the Republican Party has moved so far extreme right I cannot stand by idly without doing my part to educate and stand up to their racist, misogynistic, patriarchal, xenophobic ways," she said.

"As a woman, if I can use my body as a political statement as art for a peaceful protest I shall gladly do so. I am a Clevelander and gladly welcome this opportunity to display my female body as something that shouldn't' be shameful but beautiful and enlightening."

Tunick's photos from the project are available on the "Everything She Says Means Everything" website.