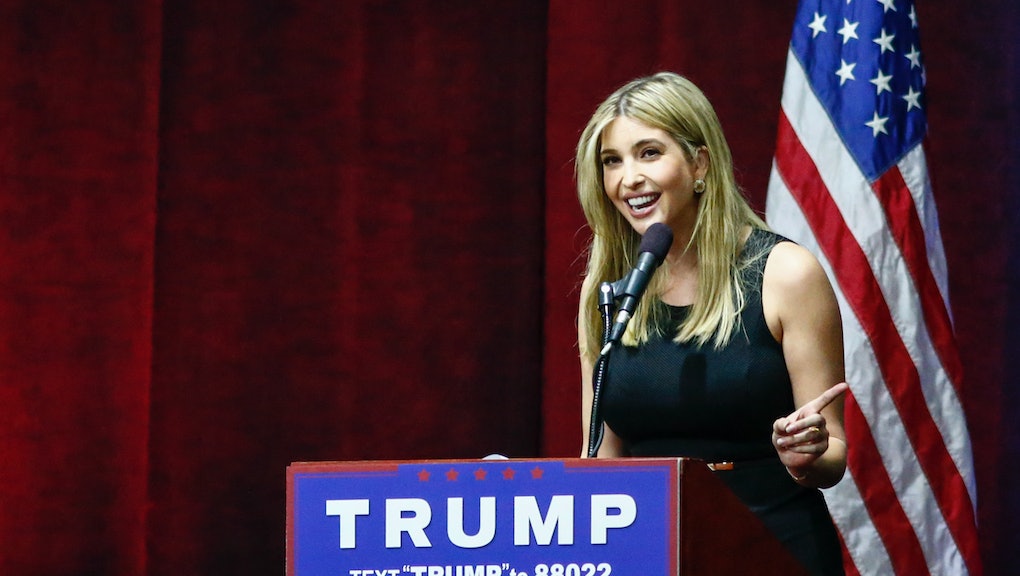 In 2016, the Republican National Convention is a family affair — specifically, Donald Trump's family affair. After difficulty locking in speakers for the event, every adult member of Trump's nuclear family has been slotted to speak in Cleveland this week.

His eldest daughter, Ivanka, is scheduled to speak Thursday evening, the theme of which will be "Make America One Again." It's safe to assume her speech will focus on unity. The people she's most likely to target? Women.

"Trump's weakness with women is one of the biggest hurdles he faces in terms of making the numbers add up in the country," Geoffrey Garin, a pollster and a strategist for Priorities USA, a pro-Clinton Super PAC, told Minneapolis' KARE. "Democrats can't win without winning women, and Republicans can't win unless they find some way to reduce their disadvantage with women."

Donald Trump seems to have found his "some way" in daughter Ivanka Trump, 34, whom former Republican National Committee aide and non-Trump supporter Doug Heye called "Trump's best surrogate." And among women, he needs a surrogate: As a recent poll conducted by the Washington Post and ABC indicated, presumptive Democratic nominee Hillary Clinton leads Trump 52% to 38% for the sweet lady votes. Ivanka Trump, who once told CNN that her father would be "amazing" and "incredible for women in this country," will likely try to help him close that gap with Thursday's speech.

That may mean returning to her oft-cited theory that her father is a feminist. She'll probably remind listeners that Trump hires women, always has, and is therefore their friend. As she did on Good Morning America, look for Ivanka Trump to emphasize her father's apparently warm and empathetic nature. She'll probably draw on her experience as an executive at the Trump Organization, her father's constant encouragement of her and his influence on her.

Is she being a reasonable human enough to help women overcome the justified queasiness they may feel at the prospect of a Mike Pence vice presidency? Only time will tell.