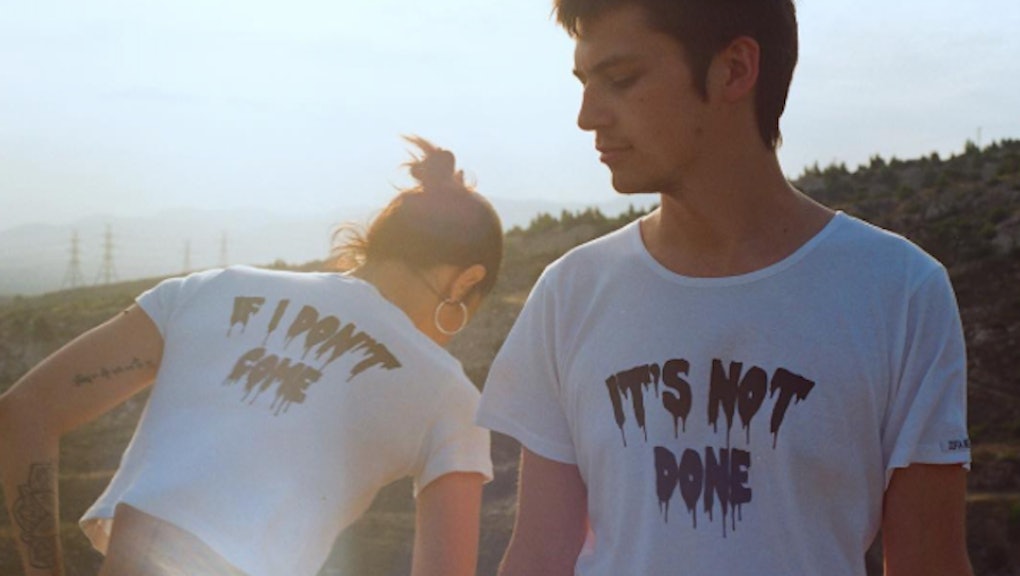 "It's very narrow-minded to define sex as penetration," Sofia Metsoviti said in a Skype interview. "For me, sex is pleasure and orgasms and there are many ways to get there."

Metsoviti is a 25-year-old clothing designer who studied fashion in London before moving back to her home in Athens, Greece. Her first commercial clothing line, It's Not Done If I Don't Come, is devoted to one important message for women who have sex with men: Sex isn't over until she has an orgasm.

Metsoviti came up with the idea for the T-shirts while chatting with her Greek friends. In a phone interview, she said she kept hearing "extremely forward-thinking" people who were still embarrassed to talk about the orgasm gap, or the fact that many straight women don't climax from sex as often as their male partners.

"A lot of times sex finishes when the guy does," Metsoviti said. "Sometimes, guys will apologize [if the woman doesn't finish], but he won't do anything about it."  In fact, according to a 2015 Cosmo survey, only 57% of women regularly orgasm while having sex with a partner.

By reframing sex as the journey towards mutual pleasure, Metsoviti hopes to spark conversations about what men can do to promote gender equality in the bedroom.

"If you start to talk about unequal pay, the stakes are very high," Metsoviti said. "Sex can be a bit easier [to talk about on a personal level]." She's already received a few orders for her unisex shirts, available in various styles of black and white with the slogan "it's not done if I don't come."

Metsoviti believes open communication is the only way to tackle the issue.

"To wear a statement like that is just being confident," she said. "[I'm] unashamed to say very clearly that the female orgasm can't be taboo or a 'special treat' for women. ... I wanted it [the slogan] to be empowering to women because they deserve nothing less."