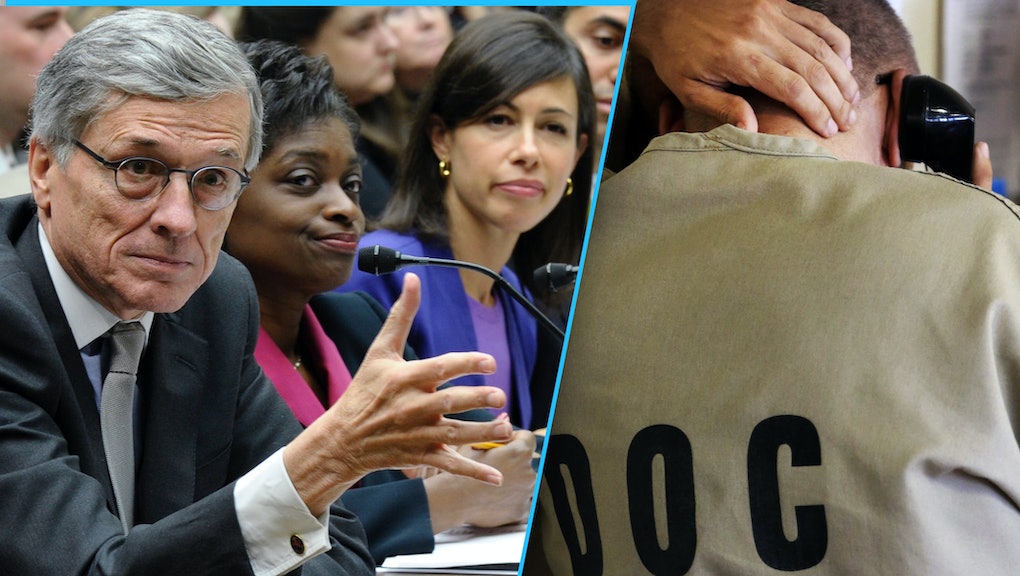 You may have heard of the prison industrial complex, but there is also an entire industry that just manages prison phones — the Verizons and AT&Ts of American prisons. Last week, those companies gained major ground in the fight to keep them in check.

After legal pressure from the prison telecoms industry, the Federal Communications Commission (FCC) proposed a new set of caps on what those telecoms can charge vulnerable families to keep in touch with incarcerated loved ones over the phone. The former cap on phone calls was 11 cents per minute. If the new proposal passes, it'll be a sliding scale of 13 to 31 cents, based on the size of the facility.

For decades, the cost of keeping in touch with a relative in jail has been crippling. The Ella Baker Center published in September found that one in three families of inmates goes into debt just to cover the cost of calls and communications with that inmate. In 2000, some of those families filed a class-action lawsuit called Wright v. Corrections Corporation of America to put a cap on those costs, and in 2013, the FCC finally decided to cap prices for calls at federal and state facilities at 11 cents a minute.

But what looked like a resounding victory was met with blowback from the prisons communications industry, who filed complaints and lawsuits alleging that the new caps would cut unfairly into their ability to stay profitable. In March, two of the big three prison telecoms, GTL and Securus, won a lawsuit that bought them some time before the changes take effect.

The FCC's new decision is a compromise, and it gets the caps finally put in place after years of struggle.

But there are many jails where officials have managed to pull costs way lower. In states like New York and New Jersey, the cost of phone calls are 4 and 5 cents a minute, casting doubt on prison companies' claims about how much they really need to charge to stay in business.

"This goes to the lack of transparency in the prison telecom industry," Prison Legal News editor Paul Wright told Mic over the phone. "These telephone companies going to the courts and FCC and telling them one thing, but they're out in the field and doing the opposite. They're saying, 'We can't possible stay in business unless we charge at least 19 or 20 cents a minute,' but they go cut a 5 cent deal."