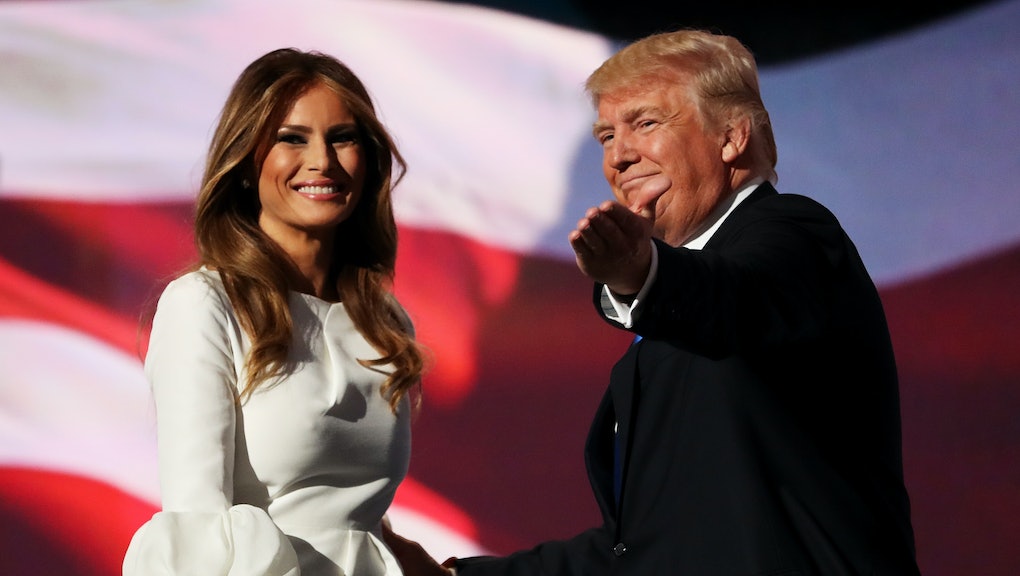 CLEVELAND — Had it not been for the plagiarism firestorm engulfing Melania Trump, the big story coming out of the kickoff of the Republican National Convention here would have been the pandemonium that erupted on the convention floor hours before the prospective first lady's speech.

Or Rep. Steve King's assertion that no "subgroup of people contribute[d] more to civilization" than whites.

And that tells you about all you need to know about the convention's launch Monday.

In isolation, the three incidents will have virtually no bearing on the outcome of the November election. It's unlikely that there are many swing voters in, say, suburban Philadelphia who were open to backing Trump — until they learned that Melania Trump seemingly lifted portions of her address from Michelle Obama's 2008 speech before the Democratic National Convention.

But the controversy nevertheless points to a glaringly persistent problem plaguing Trump's insurgent campaign. It's difficult to see how a fully staffed, sophisticated campaign organization would have let slip a speech containing such stark examples of apparent plagiarism.

That disorganization is reflected most clearly in Trump's badly lagging fundraising operation, which is dwarfed by prospective Democratic nominee Hillary Clinton's financial juggernaut, as well as his lack of a ground game designed to get voters to the polls — a significant problem for a candidate whose hopes of victory rest on turning out disengaged and first-time voters.

Meanwhile, the angry protests that broke out on the convention floor Monday afternoon laid bare the deep divisions that exist within Trump's own party over his candidacy, which many Republicans fear will irreparably damage the party's brand. The absences of high-profile figures like former Presidents George H. W. Bush and George W. Bush, former Florida Gov. Jeb Bush, 2008 nominee John McCain and 2012 nominee Mitt Romney underscore the mix of unease and downright disgust with which many Republican graybeards have greeted Trump's nomination.

The convention floor chaos on Monday — stemming from a failed effort to force a vote on rules changes that could have paved the path for another nominee — is particularly nettlesome for a presumptive nominee preaching a message of national unity and "law and order."

Beyond his divisive image among fellow Republicans, Trump also confronts a general electorate that overwhelmingly views him unfavorably. He's especially loathed by African-Americans and Hispanics — and King's reflections on the superior contributions of white culture won't help Trump make inroads with those voters.

Notably, however, the party strove on Monday to convey that its calls for "law and order" — which follow a series of widely-publicized killings of African-American men by police, as well as the assassinations of police officers in Dallas, Texas, and Baton Rouge, Louisiana — are not racially tinged.

Milwaukee County Sheriff David Clark Jr., an African-American and fierce critic of the Black Lives Matter movement, received one of the evening's most raucous receptions on Monday, opening his speech by declaring, "Blue lives matter."

"I think that he's wonderful, and I think that his remarks speak to most of America because division has to stop, and I hate to say it, but I blame Obama for that division," Laurie Powell, an alternate delegate from North Carolina, said after Clarke concluded his address. "Everyone here tonight who has said that we cannot heal our country until we get back to 'All Lives Matter' is right."

Paul Wharton, an alternate delegate from Wisconsin, was no less effusive.

"Here you have a law enforcement officer who is the head of his department, he's a sheriff. He's an African-American, so he sees it from that perspective, and he's in a district that's actually primarily Democratic," Wharton said, lauding Clarke's "very eloquent" exhortation to restore "social order."

With the country riven by bitter tensions over race and policing, Republicans may benefit from voters' desire for order and peace.

But as the country saw plainly on Monday, Donald Trump's GOP could badly use both.