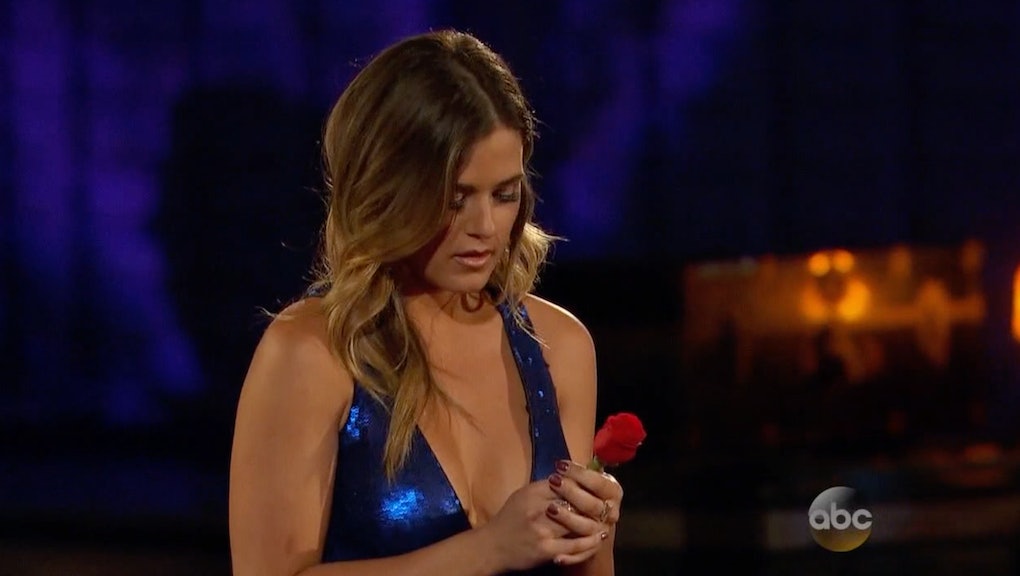 'The Bachelorette' Week 7: Hometowns and Hoedowns

Hello, all you lovers, dreamers and former competitive swimmers! Welcome to week seven of the never-ending journey that is this season of The Bachelorette. Monday's episode had us hopping all over the country, from the snowcapped mountains of Colorado to a boring high school in California.

This week was JoJo's chance to narrow down her choices and whittle the crew of lovebirds down to a manageable three — but, in true Bachelorette fashion, this hometown episode ended in a surprise Rose Ceremony cliffhanger, and no one went home. Oh well, it's not like we wasted two hours watching JoJo talk to four identical moms, right? Right?!

We started on the night in Chase's hometown, Highlands Ranch, Colorado, where Chase makes JoJo meet him on top of a snowy mountain.

It turns out Chase lives in a giant house all by himself, which JoJo thinks is just grand. After giving JoJo a quick primer on his parents' painful divorce and the ensuing emotional trauma of his childhood, Chase invites his dad over so they can all hang!

For some reason, Chase decides the best time to ask his dad about his parents' failed marriage is on national television in front of a woman he is trying to woo, so he does. Chase's papa says he let himself get too caught up with his career and lost sight of what was really important. The whole thing is very "Cat's in the Cradle."

Now it's time for JoJo to get to know the other half of Chase's family, so they jet over to his mom's house, where everyone enjoys a lovely but fast meal and then immediately splits up for mandatory heart-to-heart conversations. JoJo talks to Chase's mom, Chase talks to his sister and then Chase talks to his mom.

Chase tells his mom he's falling in love with JoJo, and then a single tear rolls down his stoic face. Then when he walks JoJo back to her car, he drops the L-bomb on her. Damn, boy.

Next stop is Chico, California, where JoJo runs through a field to meet up with Jordan. He takes her on a romantic date where they walk through his high school. JoJo has to hug his old football coach; Jordan has to hug his old Spanish teacher. They kiss in the library, which is weird, because it seems like it might actually be a school day? JoJo also mentions about a million times that Jordan's famous older brother Aaron is, like, totally estranged from the family.

At Jordan's house, JoJo meets the gang for dinner (honestly it could be lunch, or a tea time situation) and Jordan's mom tells her he was the "spicy child" growing up, whatever that means. Everyone splits off for serious conversations about serious feelings, and Jordan's brother tells him he just wants him to be really happy or whatever. So chill, bro.

JoJo tells the camera (aka us) she's falling in love with Jordan but she's scared to tell him, and then she still doesn't, but they have a nice goodbye before she heads across the country to her next stop.

Now we're in the charming city of St. Augustine, Florida, where cars have apparently not yet been invented. Robby greets JoJo and immediately arranges for them to get picked up by a horse and carriage. (Haven't we had enough horses this season?)

The two go for an afternoon cocktail, and JoJo confronts Robby about his recent breakup. She's worried he's not over his ex, since they only broke up a few months ago, but he says nah, it's cool. Wonder if that will come up again?

JoJo and Robby roll into his family's house with a giant bouquet, and everyone screams with joy at their arrival. Robby's mom pulls JoJo aside for some girl talk, and JoJo admits she's falling for Robby. Oh joy, nothing could break this lover's spell! But, while JoJo is upstairs talking to Robby's sisters and assorted female relatives, Robby's mom gives his some no-good, very bad news.

It turns out that Robby's ex's roommate is spreading rumors about Robby — this person has somehow "made it look like" Robby broke up with his ex just to go on The Bachelorette. "But we know that's not true," Robby's mom assures him.

Robby is angry at these accusations, so he bursts into JoJo's girl time and kicks everyone out so he can explain the situation. Robby spills it all to JoJo, and she sensibly wonders aloud what his ex's roommate would have to gain from saying these things about him if they weren't true. Good question, JoJo, but sad, confused Robby doesn't know. Poor Robby is the victim of these vicious character assassinations. All Robby can do is shake his head. He also says his ex sucked and they were miserable together and she slapped him during a fight once and he never wants to talk to her again. Yikes.

Robby tries to cheer up JoJo by kissing her in the rain and sending her off into the night — but it seems like her doubts may still linger. There's no time for deep thought, though, because next she's off to Texas.

JoJo rides her magic night dragon all the way across Gulf of Mexico and lands it in Burnet, Texas, which is Cowboy Luke's hometown. JoJo is a Texas girl, so she wears cowboy boots and cutoffs and generally lets her Lone Star flag fly.

Luke shows her around his town, which takes approximately 20 seconds, before driving her down a dirt road to his home, where more than 50 of his closest friends and family members have gathered for a barbecue and JoJo interrogation party.

Luke and JoJo play corn hole and he gets life advice from his dad. Luke tells JoJo he has a special surprise for her, so they say goodbye to gramps and hightail it on out of that party. The surprise is horses! Huh. They ride some horses to a field, where a bunch of flower petals in the shape of a heart are there waiting for them. Luke tells JoJo he wants to have a future with her, but he doesn't say the L-word. Is it enough for JoJo?

The Rose Ceremony is at an airport, which seems weird and loud, probably. But our four remaining boys, dressed in their nicest, dullest suits, gather obediently on the runway. JoJo is emotional right off the bat, and she tells the camera she's going to get rid of Luke. But why ever would she say that? How could she sacrifice the suspense and intrigue of the Rose Ceremony? Unless ... there's a plan!

Just as she's about to give away the first rose, Luke pulls her aside for some one-on-one time — much to the dismay of the other dudes, who wonder why he needs extra time considering they had a whole Texas date together. But Luke knows this is his moment to tell JoJo how he really feels. So just before he's "supposed to" get the axe, Luke tells JoJo that he loves her.

Poor sweet, doomed Luke. Did he save his cowboy hide with that last-minute admission? This vital information sends JoJo into a panic spiral and she cries over by the planes — this changes everything! There's no way she can make up her mind now.

To see the rest of this Rose Ceremony, and everything that comes after, fans will have to tune in next week for a very special, two-night special featuring the latest episode and the "Men Tell All" installment. See you there, lovebirds!