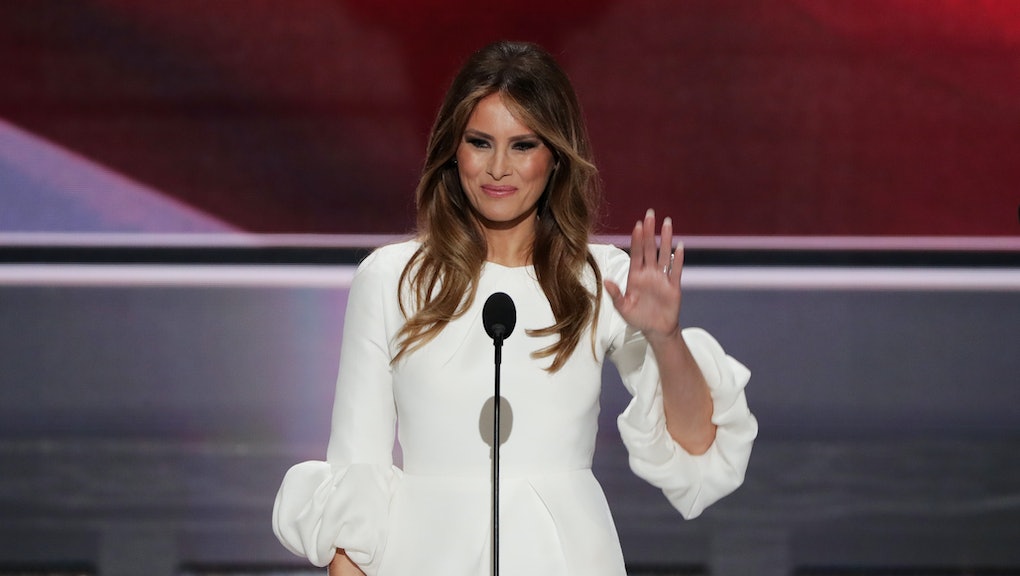 Melania Trump closed the first night of the Republican National Convention in Cleveland, with a heartfelt speech that talked about her husband, presumptive Republican nominee Donald Trump, as a man of values and a family man.

But a portion of the speech sounded more than a little familiar to one Twitter user. According to Jarrett Hill, Melania Trump's speechwriters may have found inspiration for the first lady-hopeful from current first lady Michelle Obama, who characterized her husband Barack Obama in very similar terms as he prepared to receive the Democratic nomination for president at the 2008 Democratic National Convention.

Here are the lines in question from both speeches:

Michelle Obama: And Barack and I were raised with so many of the same values, like you work hard for what you want in life; that your word is your bond, that you do what you say you're going to do; that you treat people with dignity and respect, even if you don't know them and even if you don't agree with them.

Melania Trump: From a young age, my parents impressed on me the values that you work hard for what you want in life; that your word is your bond and you do what you say and keep your promise; that you treat people with respect. They taught and showed me values and morals in their daily life.

Michelle Obama: And Barack and I set out to build lives guided by these values, and to pass them on to the next generation.

Melania Trump: That is a lesson that I continue to pass along to our son. And we need to pass those lessons on to the many generations to follow.

Michelle Obama: Because we want our children — and all children in this nation — to know that the only limit to the height of your achievements is the reach of your dreams and your willingness to work hard for them.

Melania Trump: Because we want our children in this nation to know that the only limit to your achievements is the strength of your dreams and your willingness to work for them.

While they certainly do not match up word for word throughout the whole text, several sections of them match exactly, as do the structure, message and order of points.

Donald Trump's campaign released a statement on his wife's speech after several news outlets reported the similarities between that speech and Michelle Obama's.

"In writing her beautiful speech, Melania's team of writers took notes on her life's inspirations, and in some instances included fragments that reflected her own thinking," senior communications adviser Jason Miller wrote. "Melania's immigrant experience and love for America shone through in her speech, which made it such a success."