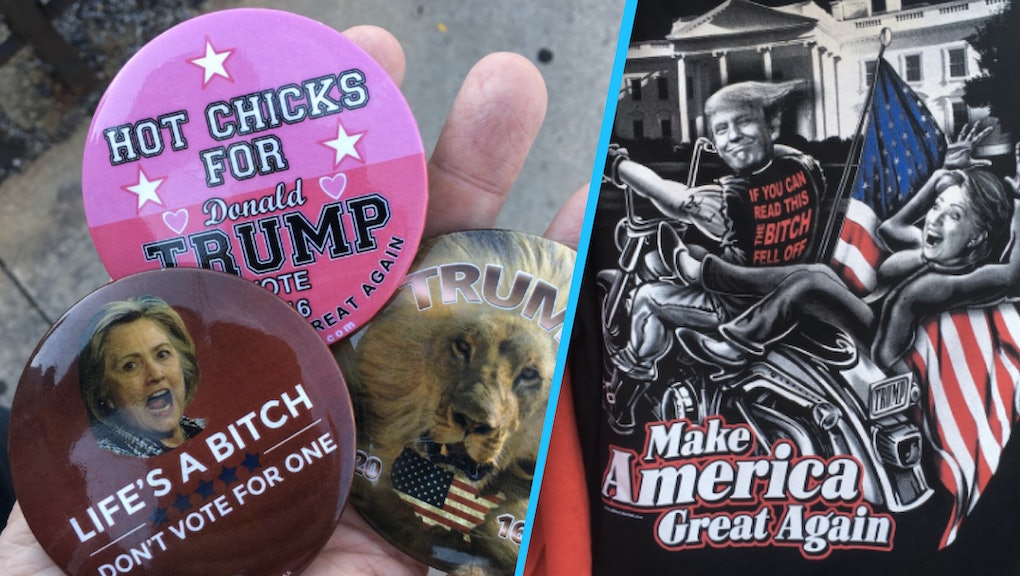 Merchandise at the Republican National Convention in Cleveland is serious business, drawing thousands of people who are eager to get their hands on a one-of-a-kind Donald Trump T-shirt or pin. Alternatively, they could also pick up a shirt that reads "Girls Just Wanna Have Guns," patriotic needlepoints stitched with "Friends Don't Let Friends Vote Democrat" or bejeweled RNC cowboy hats.

However, amid the usual suspects of red, white and blue attire is a certain subsection of merchandise that may be squirm-worthy all because of its overtly sexist overtones directed at Hillary Clinton. Amid the "Make America Great Again" merch, there is a surplus of sexist swag that aims to discourage and even shame anyone who may vote in November for Clinton, the first female presidential candidate of a major party in history.

For example, the pins.

Although vendors selling swag that berates Clinton is nothing new for a convention (Think Barack Obama punching bags at the 2012 RNC), this year's fare has a distinctly different tone that not only focuses on not voting for Clinton — because, presumably to some vendors, she's "a bitch" — but specifically addresses and celebrates the Republican Party's attractive female members.

"Hot chicks vote for Trump," one pin reads. And on a T-shirt: "Pretty Girls Vote!"

Since there's no "Hot Guys Vote for Trump" swag yet to be found at the RNC, it's almost as if, to these vendors, a woman's most valuable and notable trait as a voter is her level of attractiveness.

In addition to pins that mock Clinton, there are also plenty of T-shirts that do the same.

On one shirt sold outside of the convention, Trump is seen riding a motorcycle in front of the White House, with Clinton falling off the back. The back of the shirt reads: "If you can read this the bitch fell off."

On another shirt, Donald Trump is seen hovering over Clinton in a boxing ring, as if he just knocked her out.

In addition to being in bad taste, the T-shirts stand yet another example of just how divisive and ugly this campaign cycle has been, stooping down to calling the opposing candidate, who just happens to be a woman, a "bitch," and promoting violence against women.

Although it's almost certain that vendors at Democratic National Convention in Philadelphia starting July 25 will be poking fun at Trump via pins and T-shirts and mountains of oppositional swag, he likely won't be labeled "a bitch" and he probably won't have his own order at Kentucky Fried Chicken either. Instead, the focus may be on his hair, which resembles a neat pile of hay, or even his extremist ideals, but we'll just have to wait until the DNC to see about that one.