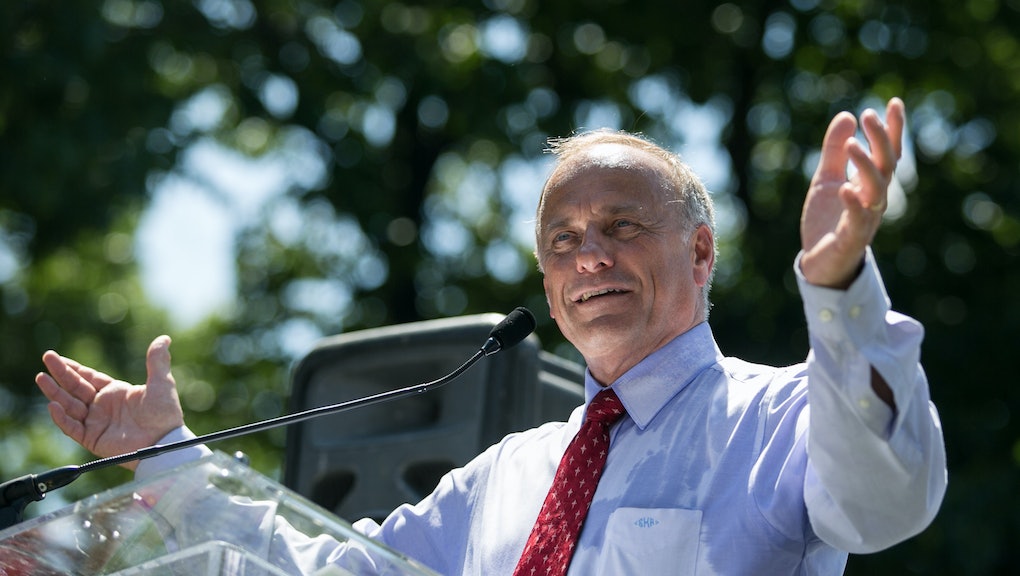 During his MSNBC appearance on Monday, Rep. Steve King (R-Iowa) said that western civilization — ahem, white people — contributed the most to the world.

"I'd ask you to go back through history and figure out, where are these contributions that have been made by these other categories of people that you're talking about, where did any other subgroup of people contribute more to civilization?" King said in response to claims that the Republican National Convention was filled with "dissatisfied" white people.

King's reference to all civilizations outside of Western civilization as a "subgroup of people" reveals his tendencies to view people or communities outside of his own as subordinate or not one of their own entity.

Unfortunately, like many contributions made by people of color, white people often get the sole credit for discovering — or rediscovering — everyday things that make our lives better and easier. For example, most of our technological and scientific advancements from Silicon Valley are created based on the diligent work of immigrants from Middle East and Asia.

Since King has seems to have historical amnesia, here are just a few more contributions made by those "subgroups of people":

King wouldn't have been able to make it to the RNC if it weren't for Ancient Mesopotamians that invented the wheel in 3500 B.C.

The majority of our shipping exports and imports relied heavily on boats. In 1300 B.C., Sumerians in modern-day Iraq invented the sailboat to catch fish in the deep ends of lakes and oceans.

The Sumerians in Ancient Mesopotamia also invented a way to tell time that became popular around 3500 B.C. They created a sundial that divided time into 60 equal parts, where 60 seconds equal one minute and 60 minutes equal one hour.

Omar Khayyam was a Persian mathematician and astronomer during the Middle Ages. In 1073, he built an observatory with other Muslim astronomers. While Nicolas Copernicus  — a European astronomer in the 1400s — has often been credited for heliocentrism, it is reported that Khayyam originally demonstrated that the earth revolved on its own axis to other world renown theologian Al-Ghazali.

Muhammad ibn Musa al-Khwarizmi was a Persian mathematician born in 780 A.D. Al-Khwarizmi that established the fundamentals of algebra and trigonometry. He also wrote extensively on the sundial and astrolabe.

There is a popular legend that in the 8th century, Kaldi, an Ethiopian goat heard, discovered that his goats were energized and couldn't sleep after eating red fruit from a coffee shrub. He then told monks in a local monastery. By the 13th century, the discovery of coffee traveled to Yemen, where it was cultivated.

The most modern innovation of hospitals was created by King Ahmad ibn Tulun in 872 A.D. in Cairo. The Ahmad Ibn Tulun hospital had wards, teaching centers and provided care at no cost for those in need.

The first degree-granting institution in the world, the University of al-Qarawiyyin, was created by a Muslim woman named Fatima al-Fikhri in Fez, Morocco, in 859 A.D. It also now hosts the oldest library in the world.

Between 4300 and 3100 B.C., Ancient Mesopotamians invented the concept of urbanization — or cities — with the city of Uruk. The city built on sun-dried bricks is regarded as the "cradle of civilization."

The guns that King and his fellow GOP members love so dearly wouldn't have been created if it weren't for the Tang Dynasty in China that invented gun powder during the 9th century.

King has never been shy about touting his Christian beliefs, but he seems to forget that Christianity originated in the Middle East or modern-day Palestine and Israel. Someone should also probably tell him scholars have found that Jesus didn't really have light skin with blonde hair and blue eyes.

The Enlightenment of Western Civilization

The United States' founding fathers, and many of the highly regarded Enlightenment thinkers — John Locke, Thomas Hobbes and Voltaire, among others — were heavily influenced by philosophers outside of western civilization. Some of the most notable were Islamic and Andalusian philosophers Averroes (Ibn Rushd), Aviccena (Ibn Sinna), Ibn Khaldun and Ibn Tufail.