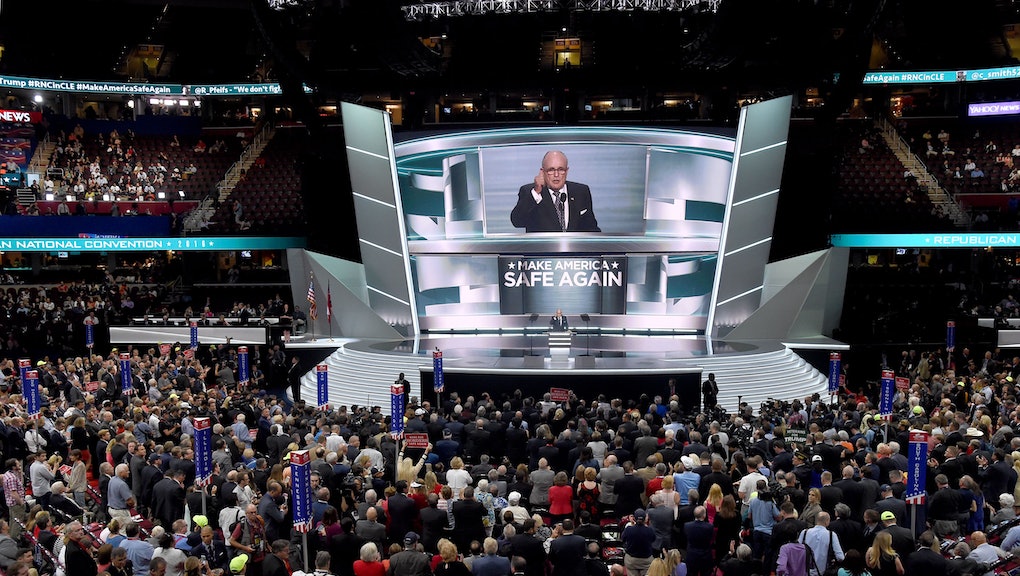 Chris Hayes looked confused. Steve King, a Republican congressman from Iowa, had just challenged the MSNBC anchor and his on-air guests to "go back through history" and name one "sub-group of people" that had contributed more to civilization than whites.

It's hard to imagine a more fitting kickoff for the Republican National Convention. After a year that saw the most openly racist candidate in a generation rise from political laughingstock to the GOP presidential nomination, it makes sense that Monday would find at least one party insider openly disputing the cultural worth of non-white people.

This should surprise no one. Racism and white supremacy have been roiling undercurrents in the GOP for decades. In the 1960s, Richard Nixon championed the "Southern Strategy," a party-wide push to ingratiate white Southern voters by appealing to their racism. He adopted tough-on-crime rhetoric during his administration that worked as a coded stand-in for "getting rowdy blacks under control."

In the 1980s, President Ronald Reagan continued the push, using racial dog-whistles like "welfare queen" to suggest black Americans were living like royalty by exploiting the country's public assistance systems. And during the Obama administration, Republicans have only deepened their racist rhetoric — openly questioning the president's birthplace and claiming he was secretly a Muslim.

But if this week's sideshow in Cleveland is an indication, we've finally come full circle. The GOP has reached the point where its values and virulent, nativist bigotry are officially indistinguishable from one another. Welcome to the Republican Party of 2016.

Aside from Rep. King's inflammatory comments, the RNC's line-up of speakers and participants has been peppered with an almost shocking degree of racist sentiment — a strain of anti-blackness, in particular, that's been couched in an outspoken and unapologetic support for America's police at a time of staggering anti-black police violence.

Former New York City Mayor Rudy Giuliani and Milwaukee County Sheriff David A. Clarke, Jr., two of Monday night's headliners, are both exemplars of this rhetoric. Both men have spent months trying to de-legitimize the movement for black lives, which has been at the center of protests against police violence over the last two years.

Giuliani has done so in part by invoking the "black-on-black crime" canard to deflect attention from police misconduct and accountability — claiming black people only care about blacks getting killed when they are killed by white police officers.

Giuliani was only slightly less flagrant on Monday.

"The vast majority of Americans today do not feel safe," he said during his speech. He went on to reference the recent killing of eight police officers by lone wolf attackers in Dallas and Baton Rouge, declining to mention victims of police violence in those same cities.

Sheriff Clarke, a black conservative lawman from Wisconsin, has also used his platform to paint the Black Lives Matter organization as villainous and violent, the root cause of anti-police sentiment in the U.S. in recent years.

On Monday, Clarke praised the acquittal of Lt. Brian Rice, a Baltimore policeman who, along with five other officers, faced criminal charges stemming from the death of Freddie Gray, an unarmed black man who emerged from a police van with a severed spine after the officers drove him to a police station in April 2015.

"There is some good news out of Baltimore, Maryland," Clarke told convention attendees, "as Lt. Brian Rice was acquitted on all charges in the malicious prosecution of activist state's attorney Marilyn Mosby."

Clarke did not mention Gray by name once. His comments were met with thunderous applause.

The inclusion of these men on Trump's list of speakers made a clear political statement. Both are firmly anti-Black Lives Matter. Their rhetoric refuses to apologize for, or even entertain the endemic nature of, police misconduct. Their law-and-order bombast echoes the dog-whistle politics the Republican party has employed since at least the Nixon era.

When either they, or King — who, prior to Monday, was perhaps best known for fighting to keep Harriet Tubman's face off the $20 bill and displaying the Confederate flag on his desk — framed a peaceful protest movement as violently anti-police, or suggested non-white people are failing to pull their weight in the Advancing Civilization Olympics, the language of white supremacy rung clear as day.

The only time it got more on the nose than that was when an actual protester entered the fray. It was an unforgettable image: Jodie Evans, co-founder of the women-led anti-war organization Code Pink, was captured on video walking the convention floor holding a sign that read, "No racism, no hate" on Tuesday.

A man was seen following her. He had an American flag in his hands. At every given opportunity, he attempted to cover Evans' body, face and the sign with the flag. An elderly couple could be seen at one point trying to yank the sign out Evans' grasp, while others stepped in to try and block her so cameras could not see her.

If there's a more potent metaphor for the modern GOP — a woman with an anti-racism sign being smothered by American flag-bearing Republicans — it's unclear what is.

Republican loyalists are shocked, to hear them tell it. At a panel during the Aspen Ideas Festival in June, a group of stunned pundits, strategists and operatives — including former-RNC chairman Michael Steele, pundit David Gergen and consultant Kristen Soltis Anderson — gathered before a crowd of thinkers and wealthy benefactors in Aspen, Colorado, to discuss the future of the GOP.

The concerns they shared exhibited a common, almost hilarious theme: How, they asked, could a flagrant racist like Trump "hijack" their party from right under their noses?

This shock belies a staggering and perhaps willful ignorance about what their party actually stands for. The racist groundswell that brought Trump to power is not an aberration from GOP values. It is GOP values. For much of the late 20th and early 21st centuries, Republican lawmakers have leveraged racist rhetoric, backed by racist policy, to solidify power among their overwhelmingly white support base and repress and disenfranchise women, LGBTQ people and racial minorities.

Trump, rather than a hijacker, is the logical conclusion of this pattern. On Thursday, the closing night of the convention, he stepped into the the Quicken Loans Arena in Cleveland, blonde (and possibly weaved) locks glistening, and made a speech that eerily echoed Nixon's calls for law and order under the Southern Strategy of the 1960s.

"I have a message to every last person threatening the peace on our streets and the safety of our police," he said to the crowd, "when I take the oath of office next year, I will restore law and order our country."

That night, on national TV, the rest of America watched as Trump formally accepted the presidential nomination of the GOP, becoming the new standard bearer for the Republican Party and one election away from being the most powerful racist in recent American history.