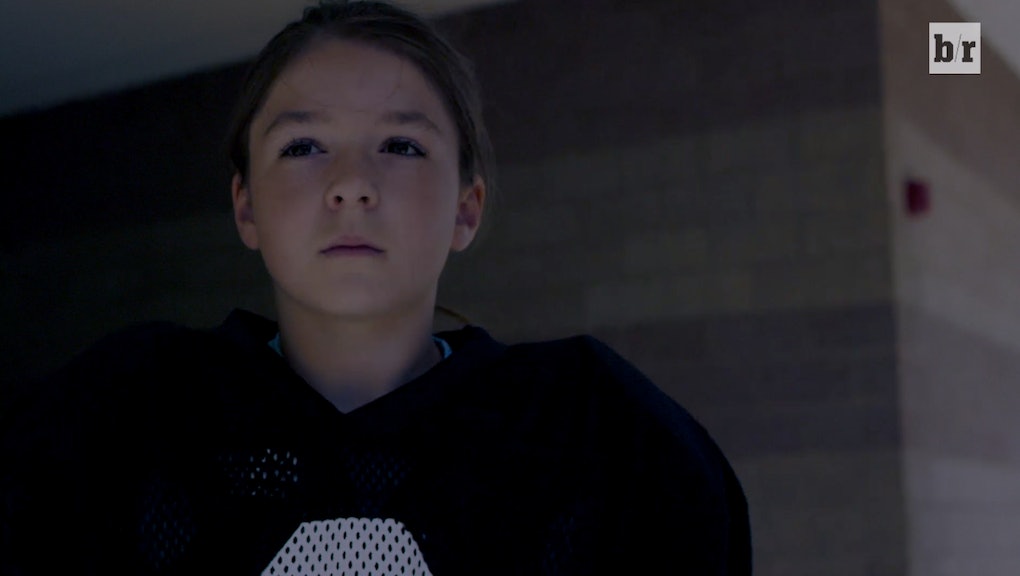 In 2012, a YouTube video of then-8-year-old Sam Gordon tackling the boys in her Utah peewee football league went viral. When HLN reported the story, a male news anchor exclaimed, "Check out this move — Sam, breaking that tackle!"

"But guess what," he added, pausing for the dramatic reveal, "Sam's a girl!"

Four years later, Gordon is making sure the idea of girls playing football produces less of a shock. According to a video from Bleacher Report, the 13-year-old inspired the first all-female tackle football league after realizing she wasn't the only one who wanted a shot at playing one of the remaining boys-only sports.

"My hope is that if more parents, coaches and players watch me play, then more girls would want to play football," Gordon said during a school assembly. During her presentation, Gordon asked how many of her female classmates would be interested in playing tackle football.

"It seemed like all the hands in the room went up," she told Bleacher Report.

To spread the word, Gordon circulated a flyer with information about the nascent Utah Girls Tackle Football League, attracting girls in the area like her who had already been playing the sport alongside the boys. The newly established team had just three weeks to practice and prepare plays for its first game, a board member told Bleacher Report.

Gordon is part of a larger movement fighting stereotypes that girls are too weak or fragile to play football. In 2015, high schooler Erin Bellucci became a kicker for her West Hartford, Connecticut, school's football team. The year before, 36-year-old Jen Welter was believed to be the first woman to play a contact position on a pro football team (though she wasn't expected to make the final roster), For the Win reported at the time.

Though these young girls and women have proven how strong and capable they are, discrimination persists: In May, a high school in Florida canceled its annual tackle powder puff football game to keep girls "safe."

But in the face of sexism, Gordon and her teammates aren't trying to prove they can be one of the boys — being a girl is more than good enough.

"Our quote for the Utah Girls Tackle Football League was, 'Play like a girl,'" 13-year-old Madison Bracken told Bleacher Report. "It meant to be confident in yourself and to do what you love and not care what anybody else thinks."