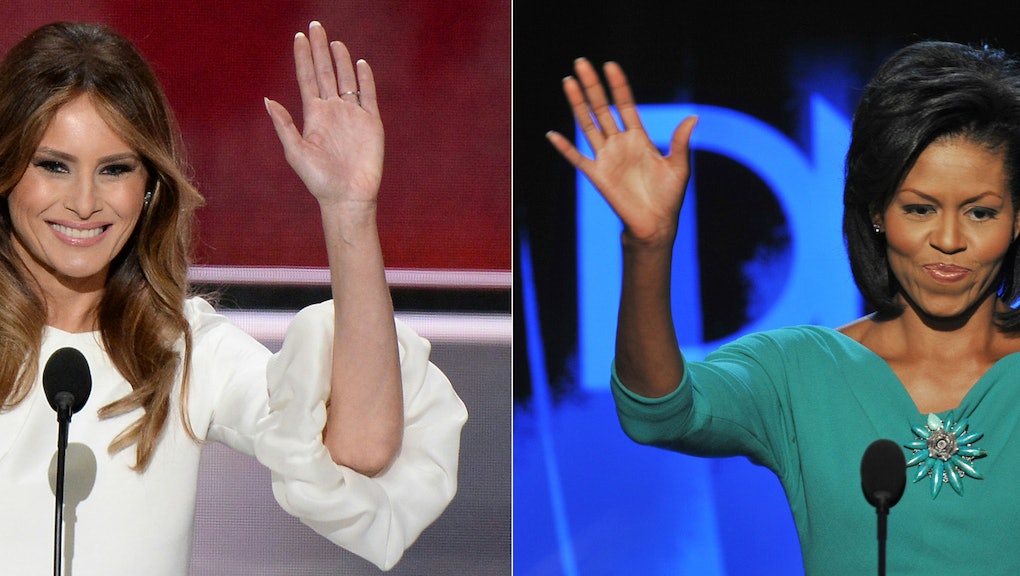 Aspiring first lady Melania Trump took the stage Monday night at the Republican National Convention in Cleveland to deliver a speech meant to introduce her to the nation and laud her husband, Donald Trump, as a husband and family man.

But it quickly became apparent that portions of her speech sounded almost identical to parts of first lady Michelle Obama's speech from the 2008 Democratic National Convention. Whoops!

Immediately after Trump's speech, journalist Jarrett Hill tweeted a comparison of phrases that seemed lifted, word-for-word, from Obama's speech; the New York Times reported even more similarities. The Trump campaign issued a statement Tuesday defending Melania Trump against the plagiarism accusations, calling the speech "beautiful" and that "Melania's team of writers took notes on her life's inspirations, and in some instances included fragments that reflected her own thinking."

But does that explain the multiple phrases from Obama's speech that are repeated verbatim? Let's take a look at the evidence.

Obama in 2008: "My mother's love has always been a sustaining force for our family, and one of my greatest joys is seeing her integrity, her compassion and her intelligence reflected in my own daughters."

Trump in 2016: "My elegant and hard-working mother, Amalija, introduced me to fashion and beauty. My father, Viktor, instilled in me a passion for business and travel. Their integrity, compassion and intelligence reflects to this day on me and for my love of family and America."

On values instilled by their parents

Obama in 2008: "Barack and I were raised with so many of the same values: that you work hard for what you want in life; that your word is your bond and you do what you say you're going to do; that you treat people with dignity and respect, even if you don't know them, and even if you don't agree with them."

Trump in 2016: "From a young age, my parents impressed on me the values that you work hard for what you want in life; that your word is your bond and you do what you say and keep your promise; that you treat people with respect. They taught and showed me values and morals in their daily life."

Obama in 2008: "Barack and I set out to build lives guided by these values, and pass them on to the next generation. Because we want our children — and all children in this nation — to know that the only limit to the height of your achievements is the reach of your dreams and your willingness to work for them."

Trump in 2016: "That is a lesson I continue to pass along to our son, and we need to pass those lessons on to the many generations to follow. Because we want our children in this nation to know that the only limit to your achievements is the strength of your dreams and your willingness to work for them."

If Obama doesn't want to go back to practicing law once her family leaves the White House, it seems like Trump might want to hire her as a speechwriter.