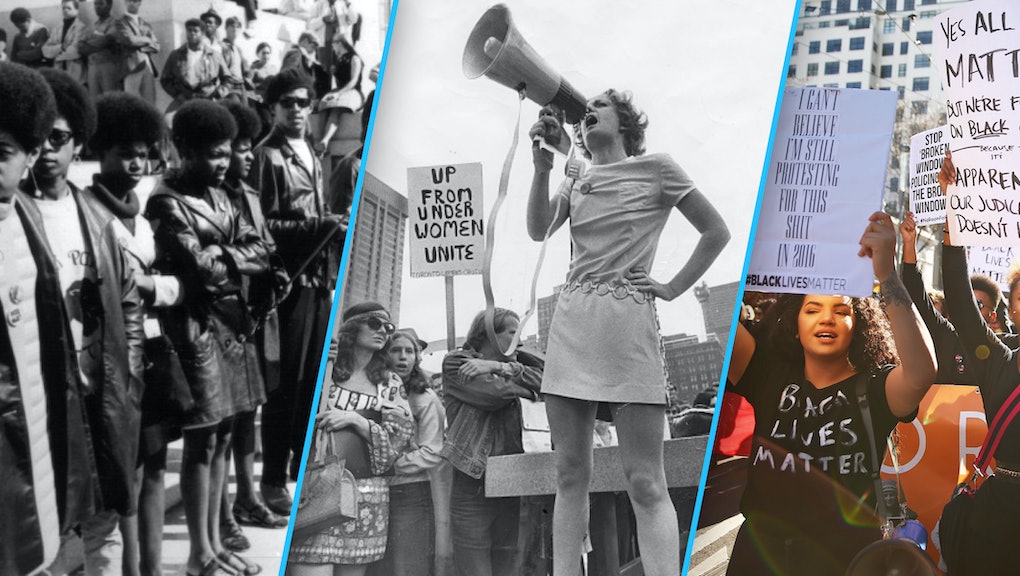 From Suffragettes to BLM, the Unexpected Ways That Protesters Have Utilized Fashion

At Black Lives Matter rallies the world over, people often come wearing head-to-toe black. They stand there in silence, with their hands in the air. Some wear shirts that read "Walter Scott" or "Eric Garner" while others wear hoodies and hats that have "I can't breathe" or "Hands up, don't shoot" written across the front.

There is a kind of visual harmony at these rallies, a group of people not only coming together for the same cause, but making a point to be visually cohesive — and that's no accident. For years now, fashion and protests have gone hand in hand.

From suffragettes knowingly dressing hyper-feminine to members of the Black Panther Party for Self-Defense wearing black berets, clothing has long been a proven protest tactic. And it still is today — with not only BLM but at rallies with protesters wearing Guy Fawkes masks or even just a bunch of merchandise for a presidential candidate they wish had won in order to prove a point. With clothing, you can choose to wear your cause directly on your chest, or even wrapped around your sleeve.

"If it's not emblazoned across your chest, they won't know who you stand for," Nakisha Lewis, a Black Lives Matter organizer in New York City, said in an interview.

When it comes to protest, fashion matters. So, here are just a few pivotal moments throughout history where protesters chose to embrace fashion in order to strengthen their movement.

Suffragettes in the early 1900s used fashion to look like they followed the rules — when they were really trying to break them.

Although suffragettes in England and the United States often committed crimes like arson and vandalism in their fight to gain the right to vote, their appearance was of a woman who would never even think of doing such things — and that's no accident.

"They sought to effect change not by challenging contemporary fashion and ideals of femininity, but by conforming to them," the Guardian reported of suffragette fashion. "Haunted by the stereotypical image of the 'strong-minded woman' in masculine clothes, pebble-thick glasses and galoshes created by cartoonists, they chose instead to present a fashionable, feminine image."

The typical suffragette's uniform consisted of a long, frilly, black or white dress, paired with a hat and a pair of gloves, giving them the distinct appearance of a high class woman. In the United States, some suffragettes even had an affection for red lipstick. Though, given that not all women in the movement could afford a new wardrobe or cosmetics, it was common for female supporters of the right to vote to wear a small brooch with jewels the color of the movement: purple, white and green. For them, any little bit of visual unification helped.

By conforming to society's ideas of what an independent-minded woman looked like in the early 20th century, the suffragettes were able to give off an aura of rule-following, while also actively fooling the people they were directly fighting against. And in the end, they of course succeeded.

Vietnam War protesters in the 1960s used armbands to show their support of peace.

Just before Christmas in 1965, Mary Beth and John Tinker of Des Moines, Iowa, came to school with black armbands wrapped around their upper arms as a symbol of their mourning of the thousands who had died so far in Vietnam. Harmless as it may seem now, the Tinkers and their peers who also wore armbands immediately faced massive consequences.

"We decided to wear the armbands to school even though the school authorities had prohibited us from wearing them," John Tinker told Rights Matter. "Although our wearing of the armbands did not lead to any violent or disruptive situations at school, we were suspended anyway."

What they didn't know then is that that one plain piece of black fabric would spark a national discussion on students' rights and free speech that would make it all the way to the Supreme Court. Throughout the 1960s, as news spread in papers of the Tinkers, more and more young people against the Vietnam War would wear black armbands to honor those who had died in Vietnam during rallies or at school, and it was up to the school districts to decide whether or not this was appropriate behavior.

In the case of Tinker v. Des Moines Independent Community School District, which was settled in 1969, the Tinkers' actions were considered in line with freedom of speech, and therefore protected, opening the door for thousands of other young people (and older people as well) to adopt the black armband as a protest accessory.

From burning bras to miniskirts, the women's liberation movement of the 1960s and 70s used provocative fashion to show independence.

Throughout the 1950s, Jacqueline Kennedy was the style ideal — polished, tailored and neat. But as the '50s turned into the '60s and women started to get more and more concerned with their rights and equal pay, the fashion of the movement went in a starkly different direction — and that was only aided by the rise of the miniskirt.

Popularized in the early '60s by London designer and storeowner Mary Quant, the miniskirt signaled a certain kind of individual freedom and independence for women to choose whatever they wanted to do with their body and wear on their body. At rallies across the United States, women stood with megaphones and signs that read "Women Unite," while wearing skirts that some deemed utterly distasteful.

Other than those skirts, women involved in this movement — which included women like Gloria Steinem, Betty Friedan, Germaine Greer and Bella Abzug — often chose to ditch coiffed hairstyles like the bouffant for something much more carefree, donning long, long hair parted down the middle or their natural hair styled in afros or headscarves. Some women began to embrace aspects of menswear as well, like blue jeans and suit jackets, as a nod to gender equality.

In the end, it was less about fashion, really, and more about making an independent decision on how they would look.

Black Panthers used their fashion in the '70s to show that black is beautiful.

The Black Panther Party was formed in 1966 as a left-wing organization fighting in self-defense of black people in the United States — and in order to show just how organized they were, its members crafted a uniform.

First, there was the black beret, which was a nod to the green berets that were worn by soldiers. As High Snobiety stated, the look "further [symbolized] their position as soldiers on the frontline."

There was also the black leather jackets, which they wore like armor, but above all else, the Black Panthers' look was about celebrating black culture, and that meant wearing their natural hair.

"All of us were born with our hair like this and we just wear it like this," a Black Panther member says in the PBS documentary The Black Panthers: Vanguard of the Revolution. "The reason for it, you might say, is that it's like a new awareness among black people that their own natural physical appearance is beautiful."

To prove to the police and society that black people were worthy, they insisted on showing off their natural beauty.

Still even today, it's an outfit so iconic and powerful that when Beyoncé dressed her background dancers in Black Panther-inspired garb for her 2016 Super Bowl halftime show, people went berserk, only proving that, some 50 years later, she was able to use fashion to send a clear message about the state of our times, and how far we have not come.

The purpose of SlutWalks, which are held around the world, is to eliminate the idea that sexual assault is influenced by what the victim is wearing. So, in order to get their point across, the women and men at these gatherings try to dress in as little as possible.

People show up in just bras and underwear, or nothing really at all, and chant declarations like, "Reclaim the night!" Rather than wearing clothes, some women paint statements such as, "Never without my permission" and "Still not asking for it."

Unlike any other protest movement, SlutWalks, which began in 2011 after a Toronto police officer told a group of women that in order to prevent rape, they should "avoid dressing like sluts," uses the clothing that isn't there to make a statement. Rather than focusing on a single uniform, they use their bodies and whatever clothing they feel like wearing in order to show their solidarity.

By far, the most pervasive and constant protest movement of today is Black Lives Matter, which seeks to "(re)build the black liberation movement."

In many ways, Black Lives Matter fashion mirrors that of the Black Panthers, with people in the movement embracing their race and wearing their natural hair, as an ode to the freedom they're constantly striving toward.

"A big [trend] in general is to embrace the choices that we have with our hair," dream hampton, a Detroit author and vocal advocate of BLM, said in an interview. "Culture is what lasts and what makes a mass movement, and that's what that hair represents. If you have black girls across the country deciding to wear their hair natural, that can be something we can model for our children, because that can be a model for freedom."

In addition to their hair, members of the BLM movement also have a tendency to wear black and T-shirts with the names or images of people who have been shot and killed by police scrawled across the front. According to Nakisha Lewis, a Black Lives Matter organizer in New York City, those go back decades in black culture.

"That's something I remember in the 90s, it's a part of hip-hop culture," Lewis said of the shirts. "If you follow that fashion trend, you can see that it is important to rep our 'whatever' with our chest."

And in the BLM movement, that's especially true.

Despite T-shirts, hats and natural hair remaining popular among BLM supporters and organizers, there is no official uniform. In fact, a large part of BLM fashion is actually about identity and individuality.

"When we talk particularly about this movement, you cannot separate the aesthetics from the people," Lewis said. "I think we see a lot more creative fashion in movements that defers from the suit and tie, or the perfect dress of the '60s. And that's because these people are queer, young, gender nonconforming people who are using outward expression. Fashion is very much a part of who they are."

So rather than stick to any uniform in particular, people involved in BLM embrace freedom of expression, which has allowed thousands of their supporters to come together in support of the same cause.

"It's very body positive, so I just think about all the different shapes and sizes and kinds of people," Lewis said. "Gender nonconforming and gender neutral people take up prime space in this movement, in a way that we have not previously seen before, so we get to see all the beauty and diversity in blackness."

Through time, protest movements have each adopted a certain aesthetic. For the suffragettes, it was about following the rules. For the Vietnam War protesters and members of the women's liberation movement, it was about breaking them. For the Black Panthers, it was about adopting a uniform to show solidarity and for Black Lives Matter, it's about celebrating the beauty and diversity of black people by being as free and expressive as possible.