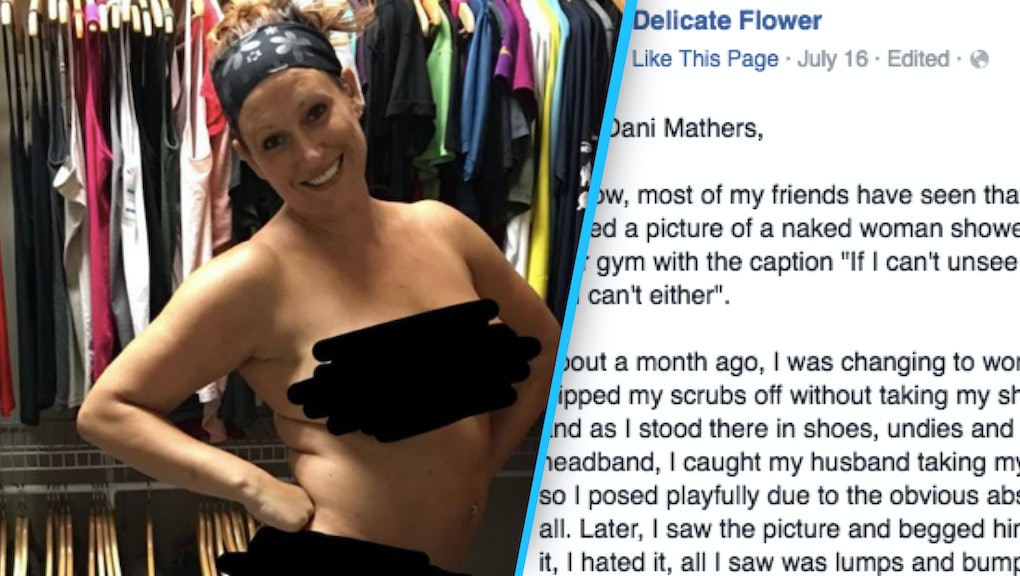 When Playboy's 2015 Playmate of the Year Dani Mathers posted a picture of a naked woman at the gym on her Snapchat, the internet erupted with outrage. This was a woman who had no idea she was being photographed, and here was Mathers, gleefully shaming this woman's body for the bemusement of her followers.

"If I can't see unsee this then you can't either," Mathers captioned the image, with a picture of her covering her mouth.

The fallout was swift.

In a matter of days, Mathers was forced to publicly apologize, was banned from LA Fitness, lost her job and, consequently, started being investigated by the Los Angeles Police Department.

"Our written rules are very clear: Cell phone usage and photography are prohibited in the locker rooms," LA Fitness executive vice president of operations Jill Greuling told the Los Angeles Times. "This is not only our rule, but common decency."

Meanwhile, down in Lake Mary, Florida, Christine Blackmon, who runs the Facebook page Delicate Flower where she regularly blogs about her life as a widow and a mother of three, was rattled.

"I don't think I felt any differently than anyone else," Blackmon said in an interview. "I was horrified. It was just awful. And it's almost sacrilegious ... in a gym of all places. I'm human, I've made a catty remark to a friend, but when somebody is in the gym ... it just seemed above and beyond."

As she continued to unpack how this exploited woman must feel now, she remembered a similar picture her husband had taken of her just a month earlier. Before a workout, Blackmon was standing in her closet, with just her sneakers, underwear and headband on, and her husband snapped a pic.

"When I saw it, I was horrified, and when he saw it, he was like, 'You're so beautiful. I just thought it was one of those little glimpses in time," she said.

Despite her own feelings about it, Blackmon thought it was important to share the image with her more than 19,000 followers to make a point about self-love and pride in your own body.

So on Saturday, with the addition of a few deliberately scribbled censor bars, Blackmon posted the image to her Facebook page with a message directly to Mathers.

"Here's the deal — you may have been a Playboy model, but not all of us work out to be 'hot,' some of us work out simply to honor the bodies we were given," Blackmon wrote. "That's all that woman was trying to do and you violated her. Shame on you. I bet I could get hundreds of women to post their beautiful bodies and regardless of size, shape or color, they will ALL be more beautiful than the ugliness you showed in that post."

"So, Dani Mathers, I'd like to introduce you to my 5'10", 194-pound lumpy, bumpy glory," she concluded, with the hashtags #UnseeTHIS and #AllBodiesAreBeautiful.

In response to her post, Blackmon, 42, has received thousands of comments and pictures from women with all different body types, with the most touching ones telling her that her own picture has given them confidence to stop stalling their lives because of how they feel about their own bodies.

"The ones that really resonate are the ones that are like, 'You know what? I get it. I'm going to put on a swimsuit and go to the pool with my kids tomorrow,'" Blackmon said. "If you realize that you haven't been doing stuff because of ridicule, those are the ones that give me chills."

What Blackmon hopes comes from her image is not that women compare their bodies to hers or think of how brave she is, but that they learn to not be so hard on themselves.

"I run marathons. I work out. I've jumped out of a plane. I've given birth. My body's been through amazing things," Blackmon said. "But the thing is, I look at my body and don't feel different than anyone else. The message I don't want them to take away is 'look how amazing she is.' That would be setting up another standard."

After all, to Blackmon, there are already so many things women have to worry about on a daily basis. Trying to please the public by looking a certain way shouldn't be one of them.

"We're so snowed in with, 'Oh my god, I have ten loads of laundry and I have to lose 20 pounds and I only spent 5 minutes with my kids,'" Blackmon said. "As women, instead of looking at all the cellulite and all this weight, think about the smile you brought to the cashier when you said you liked her nail polish. I know this is so, so cheesy, but we're so hard on ourselves. Sometimes we need to be told something good."