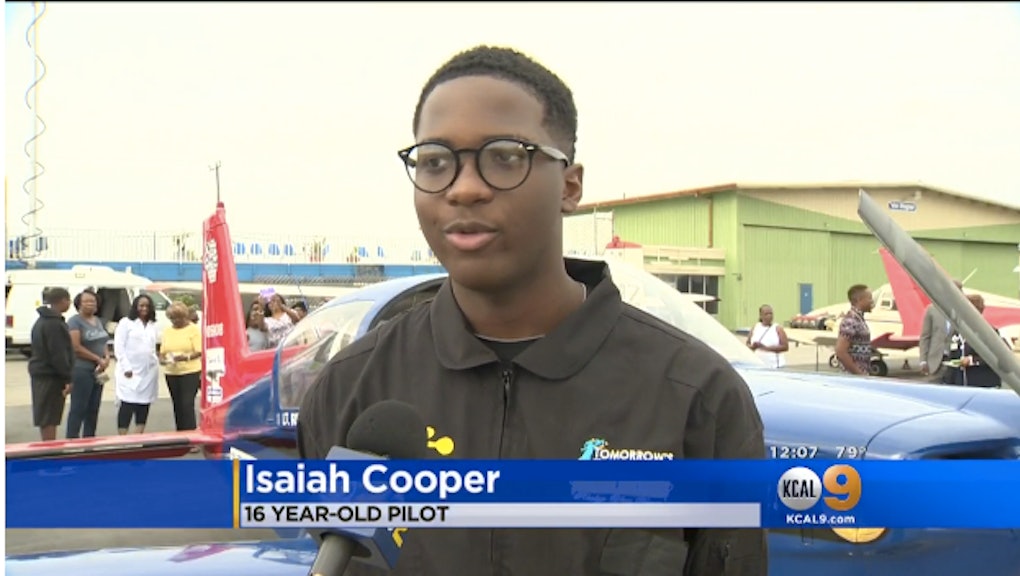 Meet Isaiah Cooper, the Compton Teen Who Just Took an 8,000-Mile Flight Around the US

This 16-year-old Compton, California, native just made history by becoming one of the youngest African-Americans to pilot a flight across the United States. After a two-week flight, Cooper made his historic landing Monday at the Compton-Woodley Airport.

"Next year, I'm looking to be the youngest to fly around the world at the age of 18," Cooper said after his 8,000-mile flight, in an interview with Mic.

Cooper's journey to break the world record started at a young age, when he enrolled in an aviation youth program at Tomorrow's Aeronautical Museum. TAM is a Compton-based youth organization that provides at-risk youth the opportunity to learn how to become pilots.

"I started coming to the museum when I was five years old," the young pilot explained. "The first time I was co-pilot, I was seven. The first time that I actually got to pilot a plane with an instructor, I was 11 or 12."

Cooper attributes much of his success to his mentor, Robin Petgrave, who is also the founder of Tomorrow's Aeronautical Museum. Petgrave also mentored Kimberly Anyadike, who is believed to be the youngest black female pilot to fly cross-country at 15.

It wasn't until Cooper talked to Petgrave on his 16th birthday that the young pilot's life would change.

"I wanted a better future for myself. He helped me clean up my act," Cooper said. "He told me that if I wanted to do the things that he does, I would have to work hard and leave all the bad stuff alone. From there, he trained me and set me on the world record that I just completed."

Petgrave is also Cooper's chief executive pilot and has been rooting for him along the way.

"It's kinda cool when you see a kid that comes to you with this idea and this dream and then you help them to realize it," Petgrave said. "Especially when you have your setbacks like he did when Mother Nature challenged him and he had to execute emergency procedures."

Mother Nature's challenge came to Cooper in the form of a microburst, which is a strong wind that pushes the plane down, which forced him to make a crash landing in Wyoming.

"It was terrifying. I was really scared, I wanted to give up and go home," Cooper said. "But having conversations with Robin and other people, it calmed my nerves and I continued on with the trip."

Cooper, who plans on going to college in the near future, is preparing to become the youngest pilot to fly around the world by himself. Matt Guthmiller of South Dakota currently holds the Guinness World Record for youngest pilot to circumnavigate the globe. He was 19 years old at the time.

The young pilot is currently raising money to accomplish this feat on GoFundMe. "I would really love if people could help donate for this next trip that I'm planning next year," he said.

Cooper understands that he is an inspiration for many within his community.

"Stay focused and hustle hard," he advised. "You can achieve your dreams. You just have to go for what you want and you can't let anyone distract you from the path that you're on."