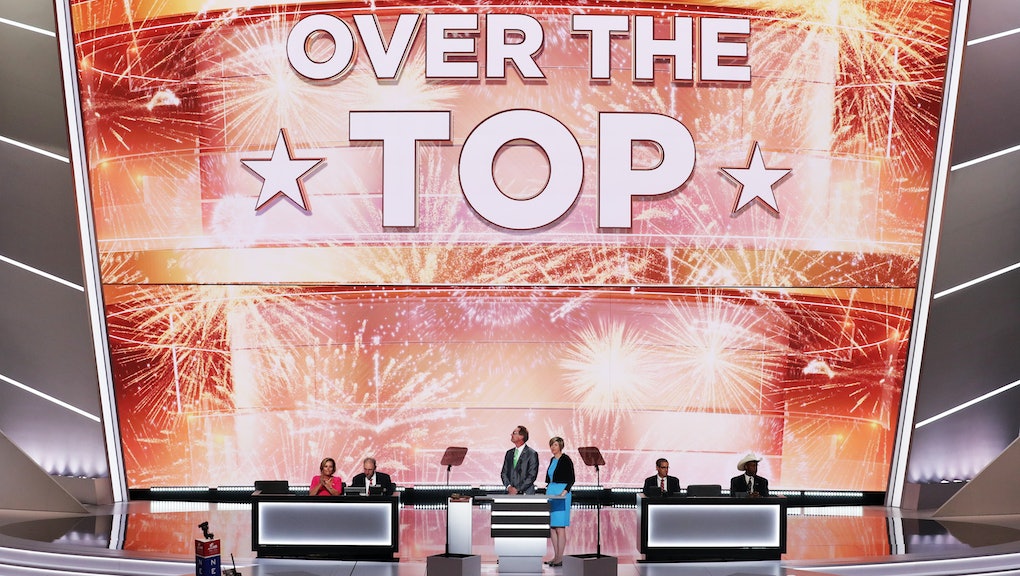 The second night of the Republican National Convention was promoted as a series of speeches on economic policy, but as the disastrous course of the first night might suggest, ended up being anything but.

The evening began with a celebratory tone as Donald Trump officially won and accepted the Republican nomination for president, but following that, multiple speakers turned the topic from the economy to the alleged crimes of presumptive Democratic nominee and former Secretary of State Hillary Clinton.

Really. Hold onto your butts, because things are about to get weird.

"He is positive in nature. He is a warrior and winner ... It is my distinct honor and great pleasure to nominate Donald Trump for president of the United States of America."

Trump clinched the nomination with ease.

Despite some minor opposition by anti-Trump holdouts, Trump easily cleared the 1,237 delegates necessary to clinch the nomination early in the night.

Trump's children took to the floor with the delegation from his home state of New York to announce he had won the nomination, with eldest son Donald Trump, Jr. saying, "Congratulations, dad. We love you."

Trump chimed in from his perch of choice:

This generated some criticism, given Lewandowski's latest role as a paid CNN contributor.

"I proudly nominate a great man of integrity, a proven conservative, an incredible husband and father and one of my best friends," Indiana Lt. Gov. Eric Holcomb said in a short speech. "I nominate the great governor of Indiana, Mike Pence, as the Republican Party's 2016 candidate for vice president of the United States of America!"

Ryan formally announced the ticket to great applause from the audience.

The tone then switched to attacking Clinton.

In a speech claiming she had lied to the families of U.S. Embassy personnel killed during the 2012 attack on the consulate in Benghazi, Libya, accepted corrupt donations from foreign countries and smeared supposed victims of husband Bill Clinton's philandering, RNC co-chair Sharon Day painted a Clinton presidency in apocalyptic terms.

"If Hillary Clinton was elected, that's what would happen to the values in this country," Day said. "They would be history."

White praised Trump's "Great business instincts ... the backbone of a strong economy," called him a "hard worker [who will] put in the time to get things done" and said he was a "loyal and supportive friend."

Saying Trump had supported White's efforts to build the UFC into the sports giant it is today, "You can really tell a person's true character when they're happy about another person's success."

"Donald Trump is a fighter and I know he will fight for his country!" White concluded.

But not all of Rutledge's jokes landed.

The attacks on Clinton escalated throughout the night.

Former U.S. Attorney General Michael Mukasey said the controversy surrounding Clinton's use of a private email server while secretary of state "exquisitely sums up the case against her presidency," adding her email system was so "remarkably primitive, the FBI couldn't figure out whether or not it was hacked."

Businessman Andy Wist, who graciously took the time to clarify who he was, said Clinton's primary accomplishment was "beating the rap after every time she breaks the law."

He also criticized Clinton for supporting gun control while employing armed security guards to protect her and her family.

Trump did not take the stage, but issued a video address.

This stage of the presidential process has come to a close," Trump said, calling his victory a "historic" result with unprecedented vote tallies in the Republican primary.

"We have to restore law and order and ... so many other things," Trump added.

McConnell made another appearance to slam Clinton as corrupt and unethical.

"At least he was up front about his plans to move America to the far left," McConnell said. "Not Hillary."

McConnell painted Clinton as a habitual liar on issues ranging from sanctuary cities and her email server to international negotiations over the Iranian nuclear enrichment program.

"At a moment when so many feel betrayed by their government, why in the world would Democrats put forth such a candidate?" McConnell asked. Later he added, "Not since Baghdad Bob has there been a public figure with such a tortured relationship with the truth," a reference to Muhammad Saeed al-Sahhaf, the Iraqi propaganda chief who claimed U.S. troops were committing suicides by the hundreds even as Saddam's government was collapsing in 2003.

Ryan spoke at length about party unity, all but forgetting the name of his party's candidate in the process.

Ryan said in a time of unprecedented dissatisfaction with the federal government, Democrats were offering up a third Obama term with another Clinton.

Referring to the upcoming Democratic National Convention, Ryan joked voters may be able to get through the four-day event with a "mute button" but could not survive four years of a Clinton presidency.

"2016 is the year America moves on," Ryan said. "The Republican Party stands as the great enduring alternative party."

"What do you say we unify this party at this crucial moment that means everything!" the speaker said to major applause.

Though Ryan spoke of party unity, he barely mentioned Trump throughout the address, saying "Trump" only twice.

Christie slipped into his prosecutor persona and held a show trial onstage for Clinton.

Christie's speech took a dark tone as he asked the crowd to rule Clinton guilty or not guilty for a variety of hypothetical offenses, with the audience shouting "guilty!" at each opportunity.

Clinton's people were not letting Christie, famously embroiled in his a scandal of his own, get off scot-free.

"He draws out the talent and drive in people so that they can achieve their full potential," she told the crowd. "That's a great quality to have in a father. And better yet, in the president of the United States."

"If you do what you love, hold nothing back never let fear of failure get in the way, then you've pretty much figured out the Trump formula," she said.

Donald Trump Jr. waxed poetic on economic conservatism and promised his father would make the country "greater than ever before."

"This is the most important election of our lifetime, one that will determine the future of our country and in turn, the future of the world," Trump Jr. told the crowd. "For too long, our country has ignored its problem, punting them down the road. In business, I was trained by my father to make the tough investments and decisions today to ensure a brighter future tomorrow. We've actually started to believe that solving our problems is an impossible task. That's why we need to elect a man with a track record of accomplishing the impossible."

Calling the Dodd-Frank Wall Street Reform and Consumer Protection Act "consumer protection for billionaires," Trump Jr. also singled out "tenured teachers" as another problem caused by Democratic interference with a little something "called a free market."

"They want to run everything top-down," Trump Jr. said. "They tell us they are the experts. The other party gave us a regulatory state."

Carson surprised everyone with an atypically energetic speech in which he accused Clinton of — wait, what?

Just about! The famously even-keeled retired neurosurgeon who hitched his wagon to the Trump campaign shortly after suspending his own said Clinton was a devotee of radical theorist Saul Alinsky, who, said Carson, was a devotee of the "original radical," Lucifer, as evidenced by the dedication of Alinsky's book Rules for Radicals.

"This is a nation where every coin in our pocket and every bill in our wallet says 'In God we trust. So are we willing to elect someone as president who has as their role model somebody who acknowledges Lucifer? The secular progressive agenda is antithetical to the founding principles of this nation."

That's it for Tuesday night. If these first two days are any indication of what's to come, there's every reason to join us again Wednesday for "Make America First Again" day. Slated speakers include Trump's middle son Eric Trump, Pence, former House Speaker Newt Gingrich and a laundry list of Trump's onetime Republican primary adversaries — from "Little" Rubio to "Lyin'" Cruz to "Never Got a Nickname" Scott Walker.