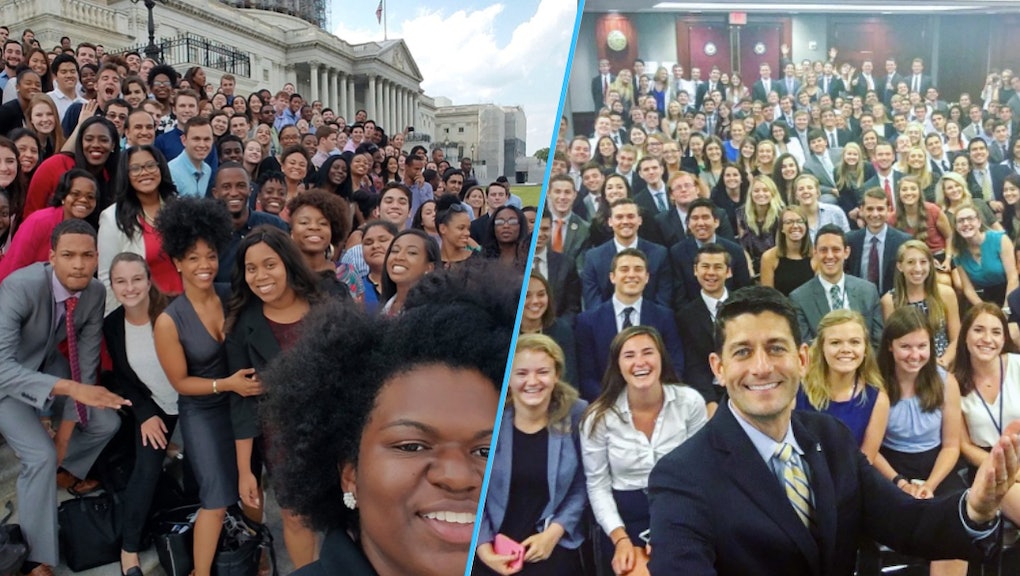 This #DemInternSelfie Is Dramatically Different From Paul Ryan's

Rep. Eddie Bernice Johnson, a congresswoman from Texas, tweeted a photo on Tuesday taken of a group of Democratic congressional interns with the message, "My intern Audra Jackson led Democratic interns in their own selfie 2day showing #DemInternDiversity #DemInternSelfie."

Johnson's tweet was a not-so-subtle dig directed at Speaker of the House Paul Ryan, who caused a bit of a kerfuffle on Saturday when he Instagrammed a photo of himself with interns along with the eager caption, "I think this sets a record for the most number of #CapitolHill interns in a single selfie. #SpeakerSelfie."

The only thing is, almost everyone in Ryan's photo was white — and he didn't even seem to notice.

Johnson isn't the only person to point out the striking difference between the two classes of interns. Journalist Colleen Mondor tweeted a similar comparison on Sunday, and Democratic Reps. Xavier Becerra and Barbara Lee tweeted their own photos this week, which illustrated the diversity of the interns in their respective offices.

But looking at Johnson's photo next to Ryan's, the difference is pretty striking.