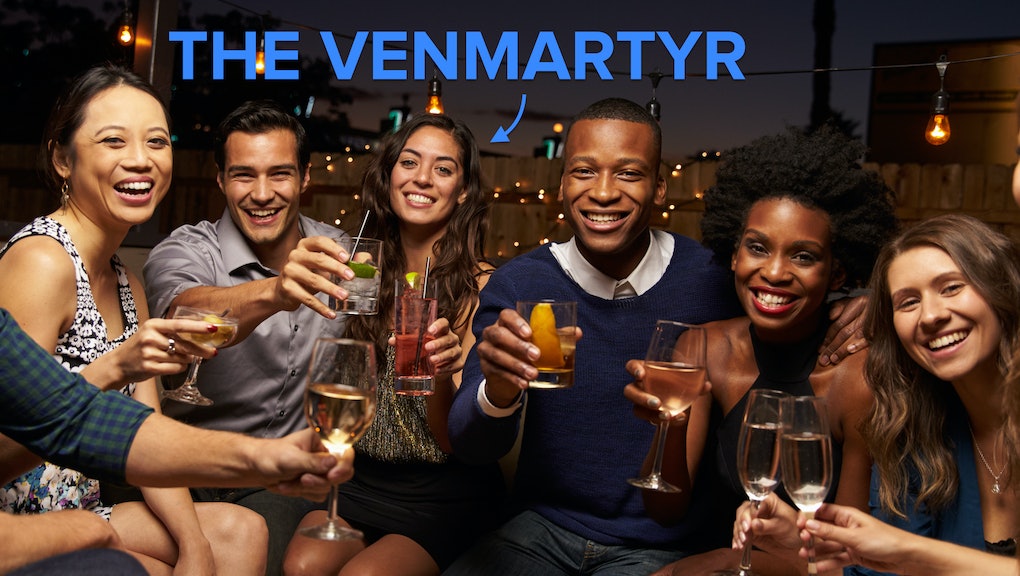 The scene: dinner at a restaurant with friends. There are six of you. When the check comes at the end of the meal, you realize the waiter will kill you if you try to split it, and nobody carries cash anymore.

One of your friends graciously offers to pay the entire bill on their credit card. "Just Venmo me!" they say, referring to the popular mobile payment app. While you and your friends are all praising this person for their selflessness (that's a lot of money to put on their card at once!), you probably don't realize you're being played.

Your oh-so-generous friend is racking up credit card points and you're stuck doing the math.

Meet the Venmartyr. Chances are, your friend group has one.

"I like to be that person whenever possible," Ellen Miller, a 28-year-old social media and communications strategist from Boston, said on Twitter. "It's way easier than a check split; I never shy away from volunteering my card because I see it as an opportunity to get credit card points."

Some Venmartyrs say they do it for selfless reasons.

"To be honest, I haven't used any of the mountains of points I've racked up," Frank Zhang, a 25-year-old consultant in New York City, said in a Facebook post. "It's more because not everyone wants to or is allowed to pay with cards, and if someone is Venmo-ing, it's much easier to have one person keep track of it. Not to mention it takes a load off the waiters."

"It's more about getting it done quickly rather than my racking up points, though that helps," Laura Bedrossian, a 31-year-old senior manager at a strategic communications and public relations agency in New York City, said in an email. "People are definitely grateful about not having to split. I think speed and ease are really important for transactions now, so if an app helps, my friends and I are for it."

Others are a little sneakier.

"I don't hide that I get points, but I don't volunteer it either, because I don't want it to catch on too well," Raymond Hsu, a 27-year-old marketing manager from the D.C. area, said in a Facebook message.

"I don't always volunteer to pay the whole bill, but if the restaurant is being difficult and there's many people splitting, then I definitely do think of doing it for the points," Hsu said. "It's the same reason I use my personal card instead of my corporate card on business trips."

Some Venmartyrs are cashing in big-time.

Samuel Wein, a 28-year-old Ph.D. student in Philadelphia, said he pays for things on his card "as much as possible to get points." It's worked out well for him. "It got me first-class tickets to Rome for my honeymoon," he said in a Facebook message.

Other people said they use their points to pay for rental cars or flights. One person said they try to be the person who pays in the group so they can improve their credit. Finally, someone said that they do it so that they don't have to be the one to do the math when splitting the bill. Whoever pays gets out of the arithmetic.

So is it possible to be an altruistic Venmartyr? Absolutely — as long as you're honest. Many Venmartyrs said their friends didn't mind. Transparency is key.

"People seem to prefer Venmo-ing me vs. putting down their card even once I tell them about points," Miller said. "Different strokes."