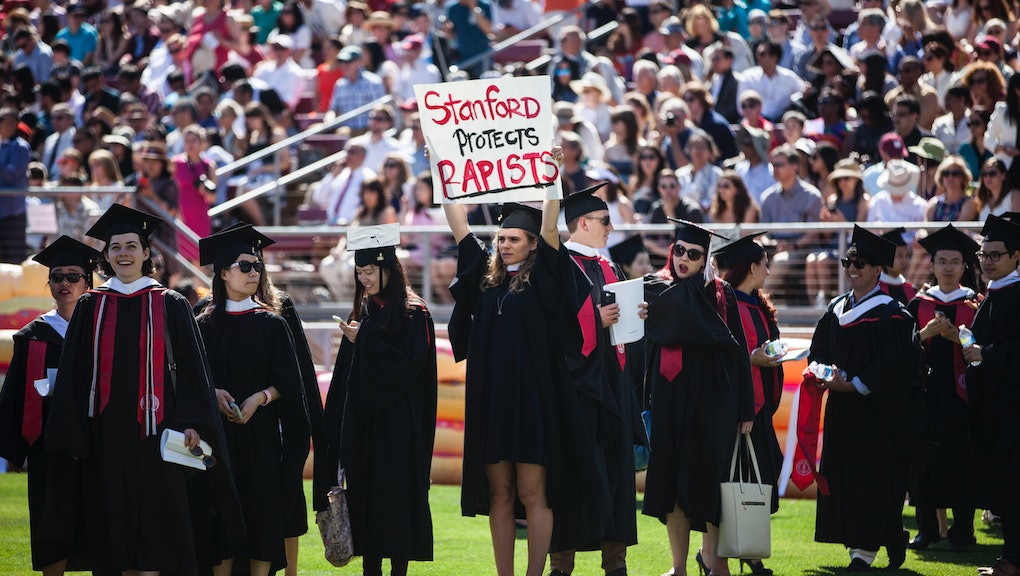 Newly released court transcripts illuminate exactly what the victim in the Stanford rape case meant when she said Brock Turner's lawyer tried to turn her into "the face of girls gone wild."

On Tuesday, the Guardian published excerpts of the exchange between the victim, named Jane Doe in the documents, and attorney Mike Armstrong. He asked her about her height, her weight, her dinner — and he embarked upon a line of questioning that would seem to suggest she had it coming.

"When you drank the quantity of vodka in the red cup," he asked. "You drank it all down at once, right?" She replied that she had.

"Like, chugged it," he continued. "And that was a decision you made, right?"

But, as the victim clarified in her statement to Turner, her decision to drink was not tantamount to a decision to be assaulted. "Alcohol was not the one who stripped me, fingered me, had my head dragging against the ground, with me almost fully naked," she said. "We were both drunk, the difference is I did not take off your pants and underwear, touch you inappropriately, and run away."

Still, Turner and his defense clung to the notion that booze was to blame for his having assaulted Doe. Armstrong zeroed in on her college drinking habits, despite the fact that she was a college graduate at the time of the assault. "You did a lot of partying in college, right?" he asked, and when she responded that she wasn't a "party animal," he countered:

"Well, you did tell the police when you were interviewed that you did a lot of partying there too, right?"

In her statement, Doe said Turner's attorney also used conversations she'd had with her boyfriend to hint at her sexual promiscuity. "I was pummeled with narrowed, pointed questions that dissected my personal life, love life, past life, family life, inane questions, accumulating trivial details to try and find an excuse for this guy who had me half naked before even bothering to ask for my name," she said.

Two witnesses found Turner on top of an unconscious Doe, with apparent intention of raping her before they chased him off. A jury found him guilty on three counts of sexual assault, even if the judge let him off easy. The Stanford case doesn't highlight the dangers of "party culture," as Turner alleged; it highlights the danger of rape culture.