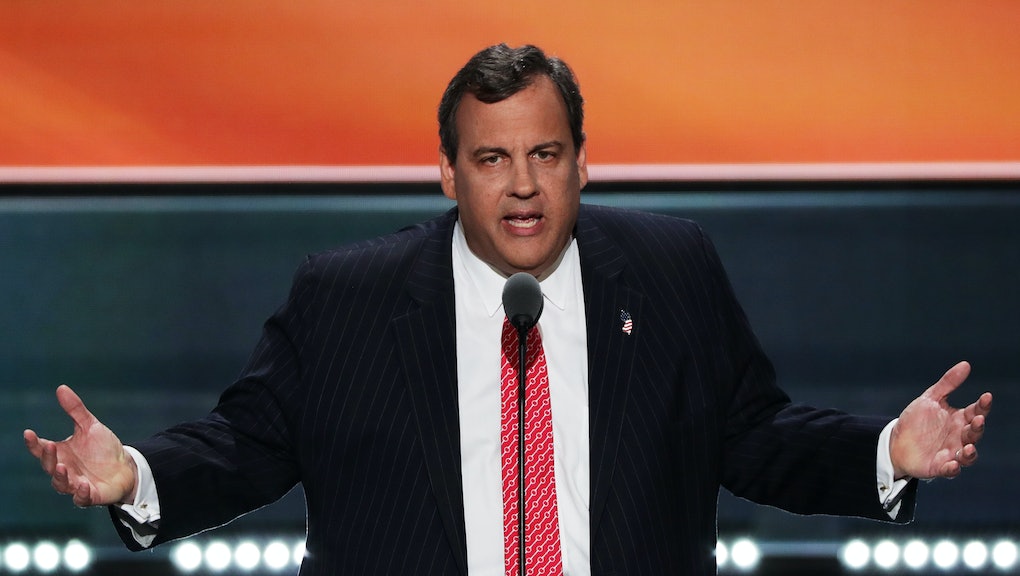 New Jersey Gov. Chris Christie — a former federal prosecutor — held a "mock trial" against Hillary Clinton Tuesday night during a prime-time address at the Republican National Convention, where he laid out all the "crimes" — in this case, a litany of bad decisions — he believes her "guilty" of.

Christie's speech itself was not out of the ordinary; plenty of convention speeches seek to lay out clear reasoning why they believe the opposing candidate is not fit to lead.

But the crowd's reaction to the speech — with loud chants of "lock her up" erupting from the convention floor — is anything but normal. And it turned Tuesday night's RNC into a sinister affair that could have lasting impacts on GOP nominee Donald Trump's chances in November.

"[Christie's speech] is one kind of convention speech that every convention has, and probably should have, and that is someone methodically going through the opposition's record in an unflattering way to generate enthusiasm from the crowd," Stu Rothenberg, a non-partisan political analyst, said in an interview.

But "You can have problems with Hillary Clinton and still think 'lock her up' is not an appropriate chant for a political convention," Rothenberg added. "So it's a good question whether or not Christie's impact is, to some extent, diluted by the audience reaction — which was a little too much like a show trial in a Third World country."

"So it's a good question whether or not Christie's impact is, to some extent, diluted by the audience reaction — which was a little too much like a show trial in a Third World country."

Even Republicans came out in opposition to the chants — which continued Wednesday morning at un-televised delegation meetings throughout the convention complex.

Sen. Jeff Flake (R-Ariz.), a notable member of the #NeverTrump movement, took to Twitter to voice concern with calls for political opponents to be jailed.

"C'mon," Flake tweeted. We can make the case that she shouldn't be elected without jumping the shark."

Steve Schmidt, a former senior adviser to Sen. John McCain's 2008 presidential campaign, also expressed concern over the chants — especially in regard to how it would be viewed by the persuadable electorate that will decide the outcome of the 2016 campaign.

"I do think the 'lock her up' chant, as it's received at home to that 32% of the electorate who will decide the outcome, it seems a little Banana Republican to me," Schmidt said. "It's something that you're not used to hearing in this country. We don't lock up our political opponents. ... I think that the chant 'lock her up' does not translate particularly well."

No matter the impact of the chants, it's unlikely they'll stop over the final two days of the convention.

The "lock her up" chant has now become a rallying cry of the gathering — and even possibly the election — similar to how convention attendees chanted "drill, baby, drill" in 2008 and "we built it" in 2012.

And that might not be good for Trump — who went into the convention with a polling deficit, and a very narrow path to amass the 270 Electoral College votes needed for victory.

"There is a good case to be made against former Secretary Clinton," Rothenberg said. "But if a party looks ... so angry that it raises questions about judgment and seriousness and rationality, then that's not so good."