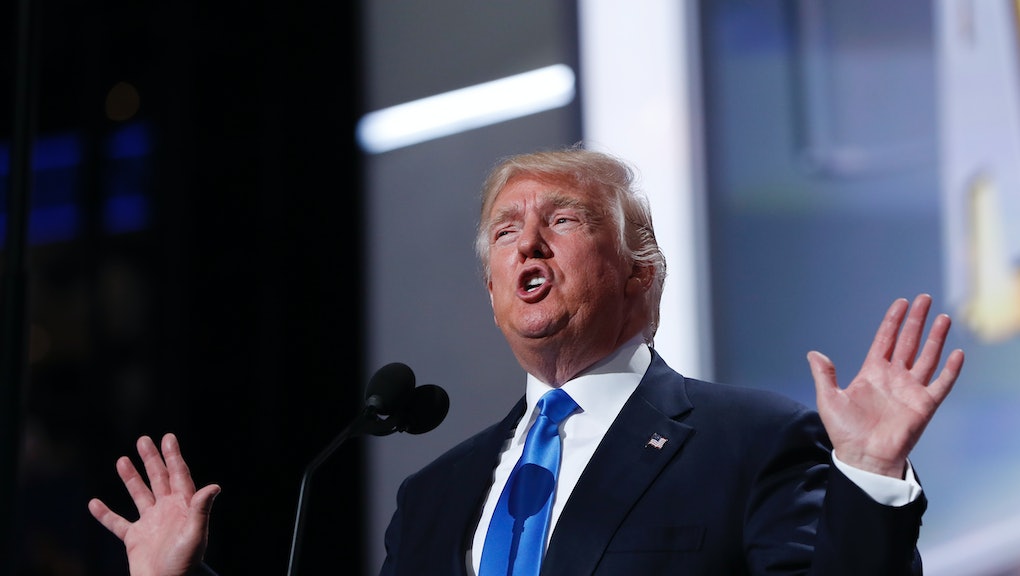 CLEVELAND — Hours after the Republican Party officially nominated Donald Trump for the presidency, speakers at the party convention here have sent a subtle but unmistakable message to the GOP's #NeverTrump holdouts: Get over yourselves.

The alternative? Enable the election of Hillary Clinton, the GOP's longtime bête noire, and deal the conservative movement a demoralizing defeat with repercussions lasting at least a generation.

House Speaker Paul Ryan, who publicly vacillated before endorsing Trump but has continued to criticize the nominee's campaign tactics, showed little enthusiasm for his party's standard-bearer on Tuesday evening — but stressed the imperative of preventing Clinton's election.

"What does the Democratic Party establishment offer?" Ryan said. "What is their idea of a clean break? They are offering a third Obama term, brought to you by another Clinton."

The 2012 vice presidential nominee implicitly acknowledged, however, that President Donald Trump would be a wild card for Republicans hoping to enact a conservative governing agenda.

"Only with Donald Trump and Mike Pence do we have a chance at a better way," Ryan said.

Senate Majority Leader Mitch McConnell made much the same case — but with an extra dose of anti-Clinton vitriol.

Reciting a litany of the presumptive Democratic nominee's disputed and debunked statements, McConnell quipped, "Not since Baghdad Bob has there been a figure with such a tortured relationship with the truth."

"She even lied about why her parents named her Hillary," the Kentuckian drawled. (Clinton once claimed that she'd been named after Mount Everest climber Sir Edmund Hilary, but she was born six years before his historic feat.)

"We put Obamacare repeal on the president's desk," he said. "He vetoed it. Donald Trump would sign it."

"I am proud to say that the voice of the people of our nation is being heard in this hall and those voices want Donald Trump to be the next president of the United States," the early Trump endorser said. "But this election is not just about Donald Trump. It is also about his Democratic opponent, Hillary Rodham Clinton."

The former federal prosecutor then launched into a spirited disquisition targeting Clinton's foreign policy record as secretary of state and her use of a private email server during her State Department tenure, for which the Justice Department declined to bring charges.

With each point of attack, Christie asked delegates whether Clinton was "guilty or not guilty," occasionally sparking delegates to chant, "Lock her up!"

Will it work? Though a recent New York Times-CBS News poll found that a staggering two-thirds of all voters don't consider Clinton honest and trustworthy, she's drawn a general election opponent whose unpopularity surpasses even her own historically dismal numbers.

According to the RealClearPolitics polling average, only 38% of voters view Clinton favorably, with 56% seeing her unfavorably. With Trump, those figures are 34% and 59%, respectively.

The convention may give Trump a bounce in the polls and help him close that gap — Tuesday night's proceedings were far smoother and better-orchestrated than Monday's chaotic start, even as much of the media remained fixated on Melania Trump's plagiarism controversy — but distaste for Clinton may not be enough to sway even some Republicans.

"It will work for a lot of people. For me, I'm not sure," said Nathan Dahlin, the vice chair of the Young Republicans of Oregon and an alternate delegate for Ted Cruz, Trump's vanquished primary foe. "I'm still thinking and praying about it."

While he's no fan of Clinton, Dahlin said he remains reluctant to back Trump in light of primary campaign tactics he considers "way beyond the pale," citing the billionaire's retweet of an unflattering photo of Heidi Cruz and his insinuation that Rafael Cruz, the ex-candidate's father, may have been involved in the John F. Kennedy assassination.

In 2008 and 2012, Dahlin backed conservative challengers to eventual nominees John McCain and Mitt Romney, but he had no problem backing the two candidates in the general election, saying they were both "honorable men." Trump, he said, is different.

But echoing the convention's headliners, Darlene Glymph, a Republican from Washington, D.C., said Trump's skeptics within the party "have no alternative."

While saying she didn't want to "degrade" Clinton, Glymph said that the former secretary of state and her husband, former President Bill Clinton, were creatures of the status quo.

"She's had her turn," Glymph said.

Therein lies the risk for Clinton in running as a candidate of continuity. With 69% of voters saying that the country is heading in the wrong direction, voters' hunger for change may forestall her hopes of returning to the White House. But can Trump convince Americans that he's a credible, effective and stable agent of change?

Voters will answer that question in 110 days.