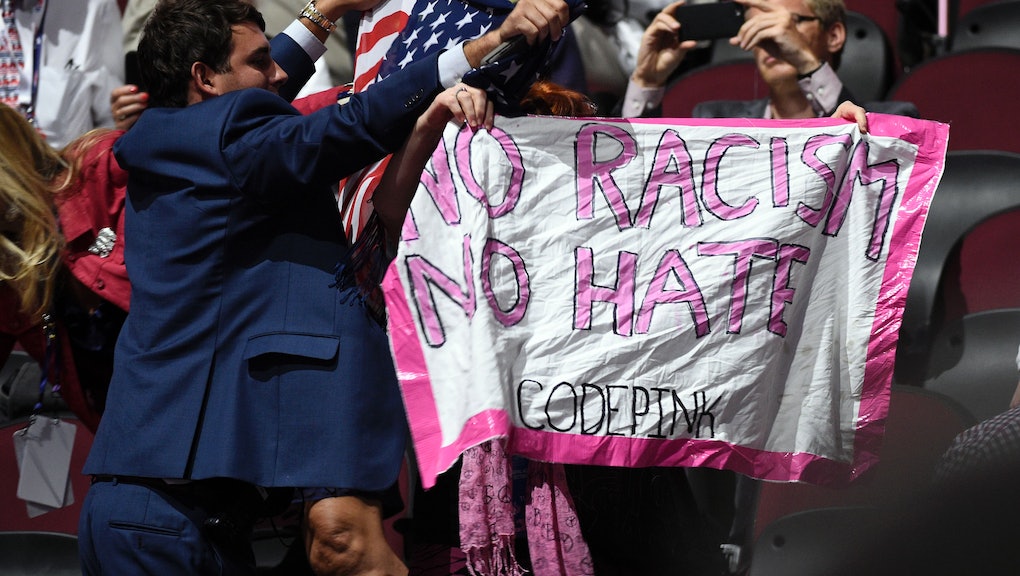 RNC Attendees Try to Hide Demonstrator's "No Racism, No Hate" Sign With the American Flag

People at the Republican National Convention in Cleveland this week didn't seem to pick up on the irony as they tried to hide a demonstrator's "No Racism, No Hate," sign behind an American flag on Tuesday night.

The banner said Code Pink at the bottom, which is a "women-led" anti-war group, and a tweet from Code Pink identified the protester as Jodie Evans, a co-founder of the grassroots organization.

In footage that reportedly aired on C-SPAN, nearby convention attendees immediately tried to silence Evans and her banner, attempting to hide her from view by using the American flag as a kind of blocking device. One woman even grabbed Evans' sign in her hands and engaged in a literal game of political tug-of-war.

At one point during the chaotic scene, a man standing behind Evans actually covered her entire face with the American flag.

Evans "was escorted off the premises by security," according to Jezebel. But it seems that having a member kicked out of the convention hasn't slowed the organizations' efforts — photos shared on social media Wednesday morning show Code Pink protesters demonstrating outside of the convention with signs bearing messages like "Refugees Welcome."