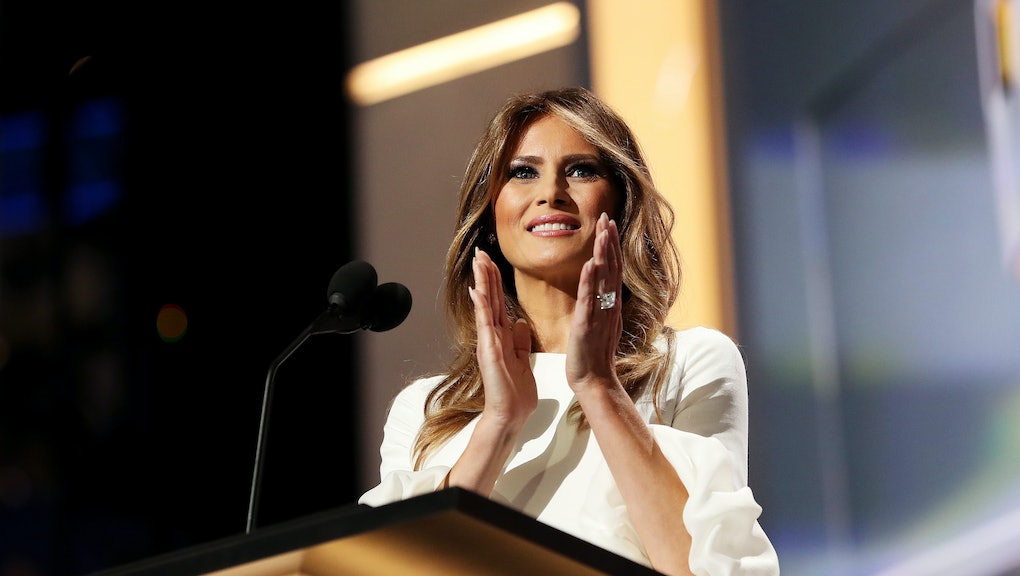 While the role played by a president of the United States is outlined in the Constitution, there's no defined role for the first lady. It would, then, be impossible for Melania Trump to "redefine" the office of FLOTUS — the only criterion for holding it is being married to the president. If Donald Trump is elected in November, she'll have checked that box. And then, like every first lady before her, she'll be free to do as much or as little with that role as she wants.

But still, people seem to think she'd represent a break with tradition. Not so, as Ohio University history professor Katherine Jellison told NPR. Actually, she'd probably fulfill the first lady role in a manner we haven't seen in decades.

"I think she will be a quiet first lady. Because that's been her demeanor throughout the campaign — someone who doesn't weigh in on policy issues.

If history is any guide, she might be sort of a Jackie Kennedy type, a well-dressed woman who will be seen as popular in the women's magazines but largely stays quiet and on the sidelines in terms of her public image."

In the past, Trump herself has named Kennedy as a FLOTUS role model: The first time her husband toyed with the idea of running for president, she was 26 and the two were dating. In 1999, Trump told the New York Times that she "would be very traditional" in the role of presidential spouse. "Like Betty Ford or Jackie Kennedy," she said. "I would support him."

Kennedy is perhaps best remembered for her style as well as her composure in the face of tragedy than she is for promoting causes while in the White House. As far as she was concerned, her job was "to take care of the President." Kennedy occupied herself primarily with the restoration and redecoration of the White House. That was her project, and the expectation is that all first ladies will have one.

Trump is also fashion-oriented. She has been vocal about the division of roles in her household: Her husband runs his business, which now includes politics; she sticks to the domain of children and home, sharing her opinions with her husband alone. She supports him. And she's also named, albeit in characteristically vague Trump terms, what her pet project would be: charity work.

"I'm very involved in charities now," Trump she told Barbara Walters in a November 2015 interview. "Many, many charities involving children, involving many different diseases. If the time comes, I will choose what is dearest to my heart and work on that 100%."

The philanthropic and domestic endeavors don't make her an uneasy Kennedy comparison, and like Kennedy, Trump would be entering the White House as the mother of a young child. It seems reasonable to expect that Trump, whose primary concern is taking care of her son, Barron, would continue to do that, placing political initiatives in the backseat. It seems equally reasonable to expect she'd be an almost anachronistic brand of first lady.

And yet the skepticism lingers. Often, it seems rooted more in a question of Trump's suitability.

"She can't talk," Ivana Trump, the businessman's first wife, said according to a 2015 New York Daily News gossip column. The comment can be taken with a grain of salt or personal beef: Melania Trump speaks four languages, but she's Slovenian and has a heavy accent. That she's foreign born wouldn't be unprecedented — so was John Quincy-Adams' wife, Louisa — but that she's a third wife would be. And while two other first ladies have modeled,mBetty Ford and Pat Nixon, none has modeled like Trump.

In their interview, Walters also asked Trump about her appearance: "I don't know how to put this, but — your image, looking the way you do, is that a liability for your husband?" She was referring to the same GQ photo feature, the one in which Mrs. Trump stretched out naked on a bear-skin rug, an image a pro-Ted Cruz super PAC used as weapon during the primary campaign.

"She's almost too pretty to be a first lady," talk show host Wendy Williams once said. "Do you know what I mean?"

Questions about Trump's qualifications for the role of FLOTUS come down to moralistic judgments — how could the much younger, lingerie model wife of a billionaire become the first lady? It's a strange question to ask, given the context of the Trump campaign.

That context is important, according to American University professor of government, Jennifer Lawless. In a phone interview, Lawless said Trump strikes people as an unprecedented FLOTUS prospect precisely because she's attached to an unprecedented presidential candidate.

"Traditionally, candidates have relied on their wives to make them seem human and normal and real," said Lawless. "That humanizing role isn't new, but Donald Trump has really not — as far as we know — used her on the campaign trail as a surrogate for him, which is what first ladies often do. Instead, when she's appeared, she's always been with him, and when she's made remarks, [she's done it] when he's been standing right there."

That lack of autonomy in her appearances might prompt people to speculate on whether or not she'd have autonomy in selecting her issue. Typically, Lawless said, a first lady's cause of choice is something she's been involved with for a much longer time than she's been on the campaign trail; then again, most first ladies have been on the political stage far longer than Trump has. She was just sort of thrust into this.

But at this stage of the game, Lawless noted, when her husband has only just gained a formal nomination, any speculation about what Trump would and would not do as FLOTUS is premature, she said.

The whole conversation is interesting, though; in a sort of backhanded, semi-sexist way, it points to a suspicion that Trump isn't serious enough to be first lady. And that, even if she turned out to be a throwback to the Kennedy era, that would represent a break from the kind of presidential spouses we've come to expect: women who campaign actively for their husbands; lead substantive, policy related charges; maintain powerful personal brands of their own. Think about the woman who followed Kennedy: Lady Bird Johnson, the first FLOTUS to act as a surrogate for her husband on the campaign trail.

Since then, we've had first ladies like Hillary Clinton, who broke ground when she tackled health care reform during her husband's first administration. Now, we have Michelle Obama, who's taken on a number of causes, including nutrition and girls' education, and is inarguably an equal to her husband. Confusion at Trump's traditionalism might just mean that the paradigm is shifting.

Really, there's only one presidential spouse who could redefine the role of first lady, and that's Bill Clinton. Why aren't we talking about that?