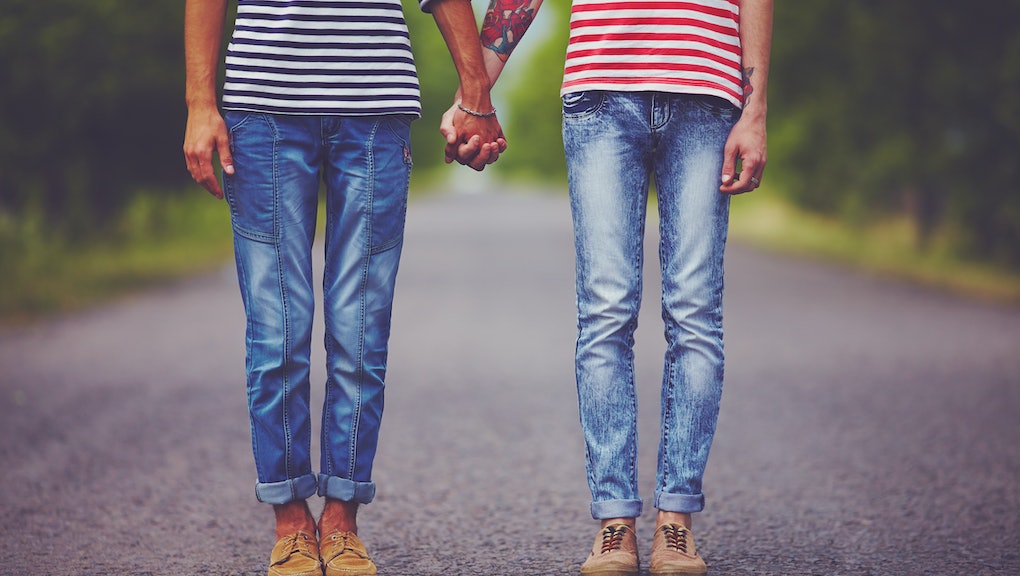 Ann Pack, 39, understood that she was a woman born in a male body for years before she ever heard words like "transgender" and "gender transition."

"Before we got married I told my wife that I was struggling with gender stuff. But I didn't really know what I was doing," Pack said in a phone interview.

Over the years, Pack became depressed and suicidal. "It became apparent that this wasn't going away and I needed to face it... for me [transitioning] was a decision made out of self-preservation," she said. Pack and her wife Brigit were married for 15 years before they finally sat down to have a serious talk about transitioning.

At first, Brigit was uneasy with Pack's decision, for more than one reason: as a devout Mormon couple in Utah, the Packs initially feared that Ann's transition would automatically lead to a divorce and ex-communication, which would mean being unofficially disowned by most of her family and friends.

"She loves me and didn't want me to hurt myself," Pack, who ultimately started transitioning two years ago, said. "We were both pretty scared when I started accepting this part of myself. Then we both took a look at what we would be losing and asked ourselves why. Why do we have to get a divorce?"

Pack and her wife Brigit are one of a handful of couples in the United States who have struggled with one partner transitioning during the relationship. Transitioning within a committed relationship can be especially challenging as the person grows into their new sense of sexual chemistry, gender roles and outward identity.

Earlier this week, another transgender Mormon in Utah, a 54-year-old special needs schoolteacher and Air Force veteran named Angie Rice, made headlines with her own story of transitioning during her marriage.

Rice's love story has a happy ending, and she says her marriage is now stronger than ever. But for some transgender people in long-term relationships, that unfortunately isn't always the case.

Serena Jazmine Daniari, a 23-year-old social programming editor at Mic, said that unlike Pack's marriage, her relationship cracked under the pressure of her transition. Although she was already taking hormone therapy and living as a woman, Daniari was still in the early stages of her transition when she started dating 32-year-old Paul*.

According to Daniari, her decision to get multiple surgeries and move towards complete physical transition put a new strain on her sexual chemistry with Paul. "It negatively affected our relationship," she said. "After the surgery I started getting a lot of attention and it made him feel insecure. It changed the dynamics of our relationship... I don't think he saw me as a woman."

Daniari said before she decided to undergo surgery, Paul never expressed his disapproval of the decision. Afterward, however, he stopped complimenting her and being physically affectionate in public. It became clear he wasn't comfortable with the change, so they broke up while she was in recovery.

Daniari thinks partners who want to stay with transgender people throughout their transition need to be prepared for hard times before it gets better.

"You need to have open communication," Daniari said. "You shouldn't date transgender women during their transition just because you are attracted to them. The reality is they are going to go through physical and emotional change and you will need to be supportive...we often fear for our lives."

Daniari and Paul didn't have any issues with religion or conservative community norms. But for many couples, one partner's transition can impact not only their private relationship, but also their public roles in the community. In a religious community, deciding to stay together in a union now deemed a same-sex marriage, could have drastic implications for the whole family.

It's been two years since Pack started undergoing hormone therapy, and she's already come out as transgender at both work and church. Yet, Pack's congregation is still grappling with questions about how she should participate in gender-specific events. She still attends church with her family, but generally avoids gender-segregated parts of the weekly service.

For this reason, Pack's wife was often hesitant about standing by her while she transitioned. But open communication kept their marital union strong.

"Not only is the person transitioning on a journey," Pack said, "but their partner and family are on a journey as well...some journeys are faster than others. One might take a little longer to accept, and that's okay."

Pack emphasized how important it was to keep an open dialogue within the family, including with the couple's daughter, who still struggles to use the right pronouns. Ultimately, she feels she'd rather hear a loved one expressing concern about the choices she made throughout the transition, such as coming out at work or undergoing surgery, than be faced with disapproving silence.

"I know people who disagree [with] but respect my choices and I'm fine with that as long as we are kind and loving to each other," Pack said. "It's better to talk about fear with your spouse than be afraid of hurting someone. My wife and I talk a lot about brutal honesty. You can't hold back what you're truly feeling."

Daniari said transitioning can be a period of increased vulnerability to hate crimes for transgender men and women as their bodies visibly change, something cisgender partners should keep in mind. "Remind [your partner they are] beautiful and secure," she advised the partners of those in transition.

Shifts in sexual attraction can also add challenges to the relationship, particularly for people like Pack, who considers herself more attracted to men than women and whose wife, Brigid, is heterosexual. Pack said it's perfectly normal for the partners of those transitioning to struggle with their loved ones' changing bodies, provided they acknowledge that such sexual challenges exist right off the bat.

"Married life is more than just sex, but sex is a part of it," Pack said. "We're trying to find a way to both be satisfied... we want our family to stay together."

*Name was changed to protect subjects' privacy and allow others to speak freely on private matters.