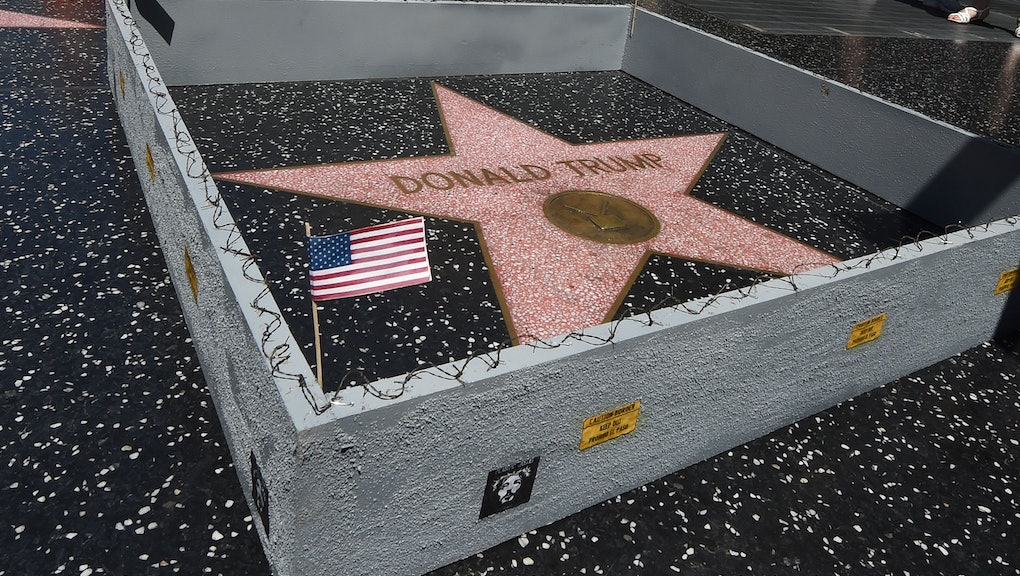 Republican presidential nominee Donald Trump's star on the Hollywood Walk of Fame in Los Angeles now has a tiny, scary wall around it — thanks to an unknown artist, CBS Los Angeles reported. The 6-inch concrete wall even has teeny-tiny barbed wire along the top, as well as itty-bitty American flags and eensy-weensy yellow "keep out" signs.

The wee wall is an unabashed dig at Donald Trump's proposed wall along the U.S.-Mexico border, an early campaign promise that he has not shied away from.

No one has officially claimed responsibility for boxing in Trump's star with a wittle baby border wall, but the wall itself seems to have tiny posters on it referencing Los Angeles-based artist Plastic Jesus, who uploaded a photo of the pint-sized barrier to his Instagram and his official website.

If the adorable little structure is indeed a Plastic Jesus project, then time may be running out to go see it. If authorities don't dismantle it, the artist himself probably will: He notes on his website that "Plastic Jesus tries to work as ethically as possible and minimize harm to the environment. His street art is only left in place for a limited time and then removed."

There's no word yet on what Trump thinks of the newest addition to his Hollywood Walk of Fame star, which was also defaced with a decidedly less-precious swastika back in January.