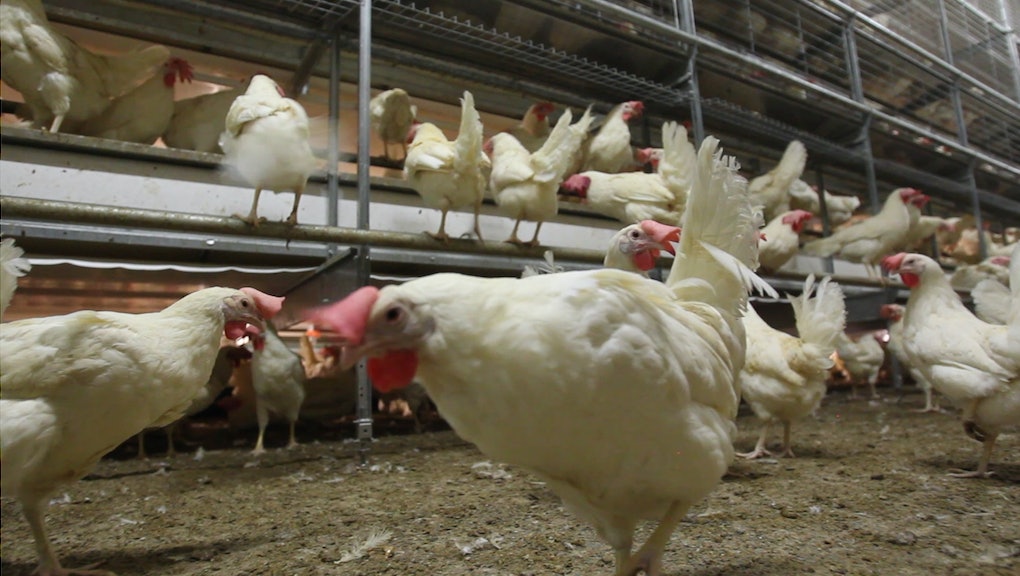 On a balmy June morning at a grocery store in San Diego, Dillon Howarth made a simple choice. After considering his options, he reached out and plucked a carton of cage-free eggs from a refrigerator case stacked with a wide selection.

"My girlfriend became interested in cruelty-free products, and now we try to buy cage-free eggs whenever we can," said the 28-year-old biotech worker.

Howarth's willingness to shell out an extra $2.80 for a dozen cage-free eggs over the ones produced by caged hens just one shelf below is infinitesimal in the vast marketplace for agricultural products. But repeated billions of times over, as it had been in the past few years in the advent of the "clean eating" movement, Howarth's preference has triggered a revolution in the food industry.

As consumers like Howarth and his girlfriend are increasingly factoring animal welfare into their buying decisions, entire industries have shifted in response. Restaurants and grocery stores have scrambled to offer cage-free egg alternatives on their menus and in their aisles. Moved by ethical as well as economic considerations, many companies have taken a step further by vowing to sell only cage-free eggs by 2025. McDonald's announced in September of 2015 a commitment to transition its supply to cage-free, and many companies have followed suit.

"Cage-free" eggs come from environments that allow hens to move around more freely, to nest in natural ways and to enjoy a range of movement not available to hens in cages.

Currently, more than 90% of the eggs produced in Canada and the U.S. come from caged hens. According to guidelines provided by the United Egg Producers, these hens are provided somewhere between 67 square inches and 86 square inches of cage space — roughly the size of a letter sheet of paper. According to Dr. John Webster, a veterinary scientist at the University of Bristol cited in a Humane Society International report, the primary objection to cage systems is "an unacceptably severe restriction on the hens' ability to meet their behavioral needs for grooming, stretching, wing-flapping, nest-building and litter-bathing."

"There is a cultural transformation in people's views about animal welfare," said Paul Shapiro, vice president for farm animal protection at the Humane Society of the United States, which has lobbied companies to adopt cage-free policies. "We have evolved to accept that animals don't just exist for us, but also with us."

That shift is being felt by farmers, too. "There's an overwhelming switch by our customers," said Glenn Hickman, President of Hickman's Family Farms. "It's not a question of whether there will be any market left for conventional eggs. It's how big the market for cage-free eggs will be."

And the question isn't if demand will shift to cage-free eggs, but how quickly the industry can evolve to meet it. With its announcement last September that it will transition its supply in 10 years, McDonald's put forth a target and a gradual pathway to walk the line between consumer demand and industry evolution — a pathway that others have already begun to follow.

"When you add all these up, over 180 million hens out of 300 million need to go cage-free by 2025," Chad Gregory, president of the United Egg Producers, said. "More and more food companies and retailers will be making similar announcements, so that number will only grow."

You can't make an omelet...

Here's the challenge: Americans eat a lot of eggs. The American Egg Board estimates the average American is going to consume 263.2 eggs in 2016. Nearly 100 billion eggs are produced every year, but only about 8% are cage-free. The shift from battery-cage eggs to cage-free eggs is going to cost us. The Coalition for Sustainable Egg Supply, an organization funded by farmers, food companies and restaurants including McDonald's, estimates a 36% increase in combined operational and capital costs for a farmer to run a "cage-free" farm from a conventional cage farm.

"Transitioning to cage-free is a commitment that was not made lightly," said Justin Ransom, senior director of quality systems for McDonald's U.S. Supply Chain Management, in an emailed statement. "We are confident that our suppliers will rise to the challenge and that their continual focus on innovation will lead to more and more efficiencies as time goes on."

"I don't think it will be easy," Siegford said in a phone interview. "But I have faith in the ingenuity of our producers and engineers. As their equipment wears out, many of them are already experimenting with cage-free systems and learning from those experiences. It will be a tough challenge, but I think they will rise to the occasion."

State governments are also jumping into the fray. California passed a law that all eggs sold in the state as of 2015 come from chickens that each have at least 116 square inches — enough to spread their wings and turn completely around, though not cage-free. Oregon and Washington have passed similar laws. Michigan recently banned the use of battery cages, mandating each bird has at least 144 inches of space. Ohio placed a moratorium on constructing new cages. And Massachusetts is poised to place on its November ballot a measure that would require all eggs produced and sold in the state to be cage-free.

According to Gregory, whose cooperative oversees production standards for its members, this will present several new challenges for farmers: "For that farmer in Iowa, producing eggs to different standards is going to be very difficult ... [cage-free legislation] creates true interstate commerce challenges when only some eggs can only go to California, while others can go to Michigan, but not Massachusetts."

"This is largely why the 10-year transition timeframe has been established," Ransom noted. "The technical, infrastructure and logistical changes of going cage-free will take time for farmers to adjust to and be implemented. Overall, we all want to make sure that the solutions being imparted are what's best for the birds, and we are taking great care to ensure we are continually improving our standards and guidance in order to help make this happen."

Peter Forsman, whose family owns Forsman Farms in Cokato, Minnesota, is a fourth-generation egg farmer. He is willing to make the effort to transition, one that he says will bring the family farm full circle to its roots, as it raised hens cage-free when it was first established in 1918. The farm's evolution in the decades since have closely mirrored the major changes in the egg industry.

"My great-grandfather, Albert, had chickens roaming freely on his farm," Forsman said. "My grandfather Norman put the birds in cages because they were being eaten by predators. And my father built cage systems because that was the safest and most efficient method. Now, I feel like our family is coming back full circle by removing cages and figuring out better ways to manage the safety and health of our hens."

The Forsmans recently decided to convert one-third of their flock to cage-free systems within three years. To do so, they are acquiring extra land and securing permits to build five new cage-free henhouses. Forsman estimates that his capital cost for cage-free systems will be triple that of caged housing, roughly corresponding to three times the extra space required for cage-free. Then there's the extra cost of feed, as more active chickens tend to eat more.

"When you first put chicks into a cage-free house, you have to train them to 'go to bed' when it's time to sleep," Forsman said. "So the first few weeks, you have to catch them and tuck them back into their roosts. About half of them get it right away, but the other half want to stay up a little later." This was not an issue when each chicken was confined to its own cage.

"Once you turn chickens loose, they do things you might not expect," said Michigan State University's Siegford. "They like to dustbathe in the afternoon, which kicks up a lot of dust. So workers need to wear protective masks. They also do things that are not very nice. They're naturally competitive animals, so they can be aggressive with one another, leading to higher mortality and injury rates than if they were all by themselves. You need to think about all the weird things that chickens do when you change their environment."

Farmers also have to adapt cage-free systems to the type of birds they raise. White leghorn chickens, for example, naturally like to crowd closely together and perch as high as possible to evade predators, so farmers would need to construct taller systems with plenty of perches. Red hens that produce brown eggs like to space out more and are not as agile as white hens, so vertical systems don't work as well for them.

There are also bottlenecks to consider. "They all want to lay their eggs in the morning, so they crowd the nesting spaces. If they can't get to them, they'll lay their eggs in places where we wish they wouldn't — on the ground, in the litter, and so on," Siegford said.

"As we move forward with cage-free," Ransom added, "we are taking learnings from research such as the study from the Coalition for Sustainable Egg Supply and are working to share best practices and find solutions at the supplier level to develop new and improved standards for hens. We believe that, together, we can make positive changes that will affect the industry at large."

In some ways, caged systems are simpler, safer and cleaner, she said. Siegford participated in an extensive study comparing several types of housing systems, conventional cages resulted in the fewest mortalities and injuries for chickens, largely because they can't get into much trouble when they can't move around and interact with other chickens.

"Ultimately, you can't lose sight of the fact that at the core you have a living animal," Siegford said. "The focus on how we care for these living animals should be recognized explicitly."

Ransom summed it up this way: "The decision to go cage-free by 2025 can be summarized with one key note: We're listening to the evolving expectations of our customers, we believe this is the right thing to do."

It goes back to simple actions by people like Dillon Howarth, whose decision to buy cage-free eggs ripples outward and inspires change at the food companies that serve Howarth and millions of other customers like him.

"What we see is an overwhelming switch by our customers," said Hickman, whose family is converting to cage-free housing for all 9 million of their hens at their farm in Buckeye, Arizona. "We think there's going to be a tremendous amount of opportunity to grow our business. Literally, this is a bet-the-farm investment for us."