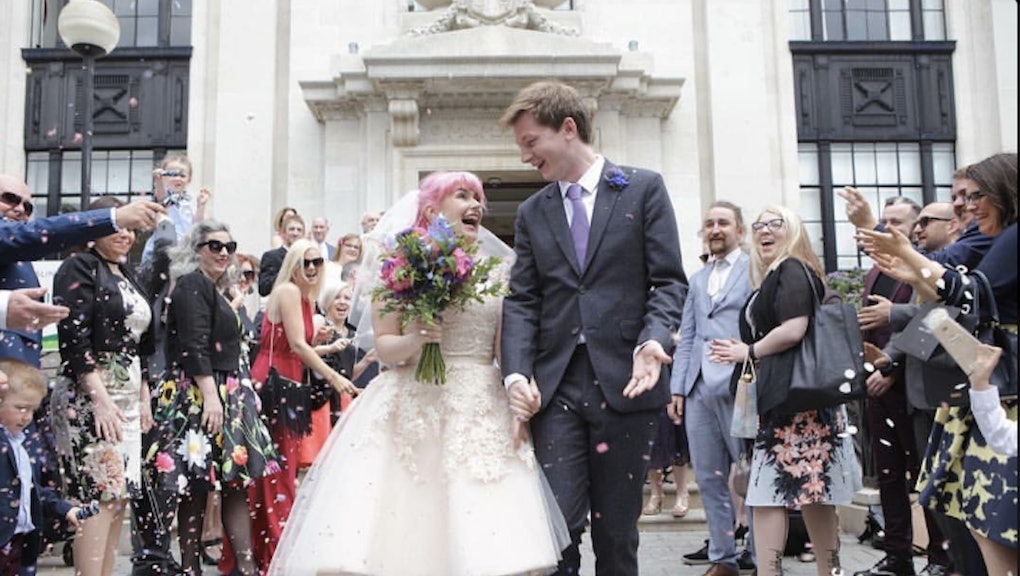 Every once in a while, the universe gives us a gentle little reminder that true love exists. It's the feeling you get when you see a corgi do a belly flop off a pontoon boat, or when you take your first bite into a cheesesteak after a 28-day juice cleanse. Sometimes, it's an actual relationship, as proven by the union of Victoria Carlin, 32, and Jonathan O'Brien, 30, two self-described "book nerds" who fell in love (and ultimately got married) after Carlin flirted with O'Brien on Twitter.

It all started in 2012, when Carlin replied to a Pokémon joke O'Brien tweeted from an official Twitter account of U.K. bookstore Waterstones — specifically, the Tottenham Court Road location's account — where he worked as a social media manager. Carlin was almost immediately smitten:

To which Carlin riposted with a cogent (and, frankly, accurate) point:

The two then decided to purchase a cabin in southern Maine, where they proceeded to engage in a five-day boinking marathon before tying the knot at an elaborate, Pokémon-themed destination wedding ceremony.

Jk! It took a little longer than that. But their love story did have an equally happy ending: After tweeting back and forth for a few days, Carlin visited O'Brien at the bookstore, bringing him a box of doughnuts after he tweeted he had a yen for them. (Cute! Also a little stalker-y and weird... but mostly cute!).

After going on their first date (where he brought her a copy of The Wizard of Oz, natch), the two started dating seriously. Four years later, they got married at a church in the United Kingdom, in a ceremony that was both appropriately twee and Pokémon-centric, if O'Brien's tweet featuring a Pokémon Go character while walking down the aisle is any indication:

Congratulations to the happy couple! Also, to anyone who secretly has a crush on a brand's social media account: Go ahead and tweet at them, girl. Because if you're as lucky as these guys, one day you two might be tying the knot with the voice of Taco Bell's Twitter.