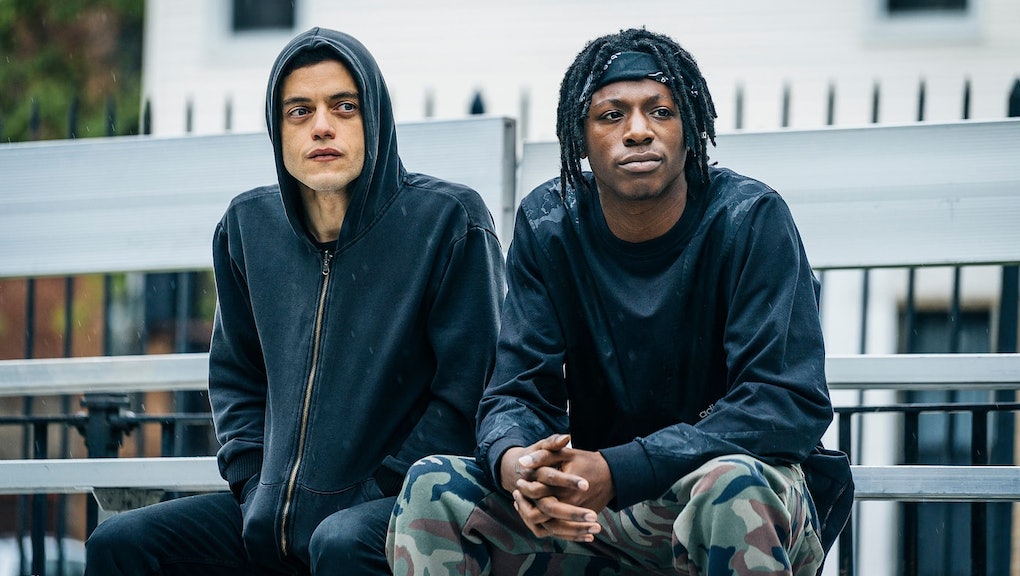 Since the 2016 Emmy nominations are already set in stone, we now have an early frontrunner for 2017 praise: Rami Malek. The actor's monologue about religion on the third episode of Mr. Robot's second season was unforgettable work.

Still suspiciously meandering through his daily routine — doing little to turn believers off of the prison/mental institution theory regarding his predicament — Elliot scores some Adderall from his childhood friend and Seinfeld enthusiast, Leon. Last season, it was Elliot's vices with morphine that played a part in his mental breakdown, but his choice for taking Adderall was clear: He wanted to get his Mr. Robot alter ego out of his head.

The side effects of taking the drug — especially, as we saw in nauseating detail, when he overdoses — becomes a heavy burden to bear, as he eventually goes six days without sleeping. But Elliot still sticks to his monotonous routine, which includes his twice a week "church group" meetings.

However, during a confession from another member of the group about a racially charged physical assault of an Indian man (the man later claims, after seeing the sky open up, that he knew God had forgiven him), Elliot begins to reckon with his own actions. From Elliot's perspective, his god is Mr. Robot. So Elliot unloads a scathing screed on the group about the hypocrisy of God and organized religion.

The rant, in full:

Is that what God does? He helps? Tell me, why didn't God help my innocent friend who died for no reason while the guilty run free? OK. Fine. Forget the one-offs. How about the countless wars declared in his name? OK. Fine. Let's skip the random, meaningless murder for a second, shall we? How about the racist, sexist, phobia soup we've all been drowning in because of him? And I'm not just talking about Jesus. I'm talking about all organized religion. Exclusive groups created to manage control. A dealer getting people hooked on the drug of hope. His followers, nothing but addicts who want their hit of bullshit to keep their dopamine of ignorance. Addicts. Afraid to believe the truth. That there's no order. There's no power. That all religions are just metastasizing mind worms meant to divide us so it's easier to rule us by the charlatans that wanna run us. All we are to them are paying fanboys of their poorly written sci-fi franchise. If I don't listen to my imaginary friend, why the fuck should I listen to yours? People think their worship is some key to happiness. That's just how he owns you. Even I'm not crazy enough to believe that distortion of reality. So fuck God. He's not a good enough scapegoat for me.

The speech struck a chord with a plethora of fans on the Twitterverse — and even those who disagreed with his perspective were nonetheless impressed with the powerful scene.

But whether or not fans agree on Elliot's viewpoint — and clearly, religion is an extremely divisive issue — it's undeniable that the commentary couldn't have been more relevant to America. This is a country where former presidential nominee Ben Carson compared the presumptive Democratic nominee to Lucifer just days ago, and a Texas pastor celebrated the worst mass shooting in modern U.S. history as part of God's work. Extreme examples, to be sure, but they certainly fall under Elliot's guidelines for "phobia soup."

Moreover, Elliot's rant inadvertently showed the viewer another crack in his delirious perspective. He vents about how he hates God and organized religion at what is presented as a "church group" meeting, yet nobody had a visceral reaction to what he said. They simply stared at him, blank-faced.

It's entirely possible that Elliot's venting was all done in his head. He even openly posits this to the audience. Conversely, perhaps what Elliot said is more commonplace in a group meeting at a psych ward or some semblance of a Narcotics Anonymous meeting. Again, we won't know the full scope of Elliot's delusions until he is willing to trust his imaginary friend again — the viewer, whom he repeatedly talks to. But it does have to happen eventually.

Series creator Sam Esmail loves playing illusory cat-and-mouse with the audience. However, Mr. Robot's convoluted narrative could screech to a halt if Elliot spends the majority of the season in faux reality. In the meantime, the other protagonists (Darlene and Angela, primarily) continue to move the fsociety and Evil Corp storylines forward in Elliot's absence.

Let's hope Elliot joins them in time — unless there are equally memorable soliloquies in the near future.